A French rapper who caused outrage by calling for white babies to be killed in a music video said he was just trying to show what ‘really happened to black people’.

Nick Conrad defended his video – which shows a white man being tortured, shot and hanged from a tree – saying it was ‘a message of love, rather than hatred’.

In one scene from ‘PLB’, short for ‘Pendez Les Blancs’ or ‘Hang Whites’, the little-known rapper and an associate drag their victim along the pavement and kick him in the head.

The video – which controversial black comedian Dieudonne M’bala M’bala, a convicted anti-Semite, linked to on his Facebook page on Saturday – was viewed thousands of times on YouTube before being taken down yesterday.

In a scene from ‘PLB’ – short for ‘Pendez Les Blancs’, or ‘Hang Whites’ – rapper Nick Conrad and a friend drag their white victim along the pavement and kick him in the head

In an interview with French radio network RLT, Conrad said: ‘I was not looking for the buzz, this clip is supposed to get us thinking and not stay on the surface. I do not understand people who do not go in depth.’

He added: ‘It’s a fiction that shows things that from the beginning to the end really happened to black people, all the elements that are cited in the song, one by one, really touched and marked black people on their flesh.’

Conrad claimed he wanted to underline the problem of violence against black people by reversing roles.

The rapper admitted that he understands those who are concerned but denies being racist.

He explained: ‘Eighty percent of the people on the team that made the clip are white, my white friends support me.’

The rapper says, ‘I walk into creches, I kill white babies, catch them quick and hang their parents’

The attack in the video appears to be a reference to a famous scene from the film American History X, in which actor Edward Norton plays a neo-Nazis who stamps on the head of a black man as he lies face down on the pavement.

A gun is also forced down his throat and he is ordered to ‘suck it’.

The lyrics evoke the killing of adults and children and advocated killing ‘white babies’ and ‘hanging their parents’.

The rapper sings: ‘I walk into creches, I kill white babies, catch them quick and hang their parents.’

As the victim is about to be strung up, Conrad asks him, ‘show me that you’re a wizard, that white people have that magical DNA’.

He faces court action for inciting racial hatred for the incendiary lyrics and the graphic video, which appears to show him torturing a victim, whose teeth are broken before he is then hanged.

The video was taken off YouTube four days after its official release.

The Paris prosecutors office opened an inquiry, with the rapper likely to face charges of incitement to hatred under France’s strict hate speech laws.

Conrad, who is in his 20s, was born and grew up in suburban Paris, but describes himself as an ‘Afro-French’ citizen.

He regularly uses his Facebook account to call for ‘a mutiny’ against France, which he accuses of still being a ‘colonising nation’.

Bruno Retailleau, of the opposition Republicans party, said the song was ‘a call to murder’, adding: ‘It’s intolerable. There are things that should not be allowed because they incite racial hatred. This is a provocation to a crime.’ 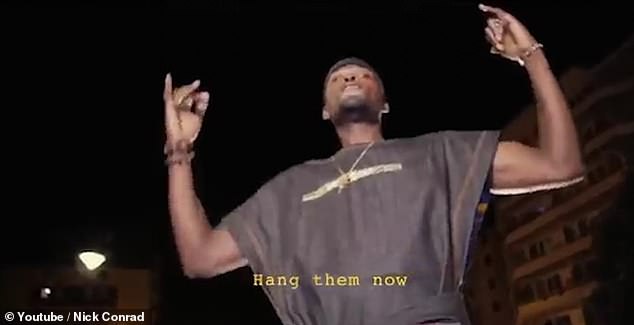 One scene in which he appears to attack a white man appears to be a reference to American neo-Nazi film American History X, starring Edward Norton

Anti-racism organisation LICRA, which filed a formal police complaint, also hit out at the rapper, saying his artistic freedom ‘is not the freedom to call for whites to be hanged because of the colour of their skin’.

Until becoming the subject of nation-wide media coverage on Wednesday, Nick Conrad was a virtual unknown, with only 40 monthly listeners on the music streaming platform Spotify.

The nine-minute video, which was uploaded onto YouTube on September 17, presents the action as taking place in the eastern Paris suburb of Noisy-le-Grand. 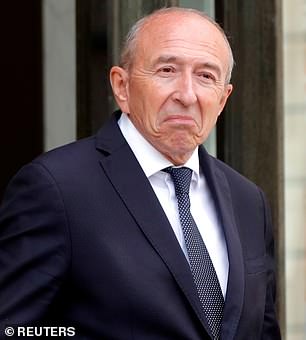 It contains references to a speech by US black nationalist Malcolm X.

On his Twitter account Conrad, who is of Cameroonian origin and has in interviews claimed to be influenced by American hip-hop, had presented it as his ‘first short film’.

Gérard Collomb, Minister of the Interior of France, tweeted this evening: ‘#NickConrad : I condemn unreservedly these abject remarks and ignominious attacks.

‘My services work for the immediate withdrawal of the content broadcast. It will be up to the judicial authority to give appropriate follow-up to these hateful appeals to hatred.’

Comedian Dieudonne M’bala Mbala was banned from the UK because of his hate-filled act.

Dieudonne, who is also from a Cameroonian background, has convictions for a number of hate crimes, including anti-Semitism.