Friend of Caroline Flack reveals their trip to Barcelona together

Caroline Flack flew to Barcelona with a friend a week before her tragic death, it has been revealed.

Flack took her own life aged 40 at her London home on Saturday after she was told she would face trial for the alleged assault of her boyfriend Lewis Burton – a charge she denied and Mr Burton did not want to pursue.

Sam Campbell had taken Flack along with her on a work trip to help keep her spirits up, but found the Love Island presenter was ‘calm and hopeful, but so weak’ even while away on holiday.

Writing a tribute to her friend on Instagram, Ms Campbell said: ‘I’ve lost count of all our holidays and trips.

‘Last week she tagged along on a work trip to Barcelona with me. Waiting in the hotel while I did meetings. 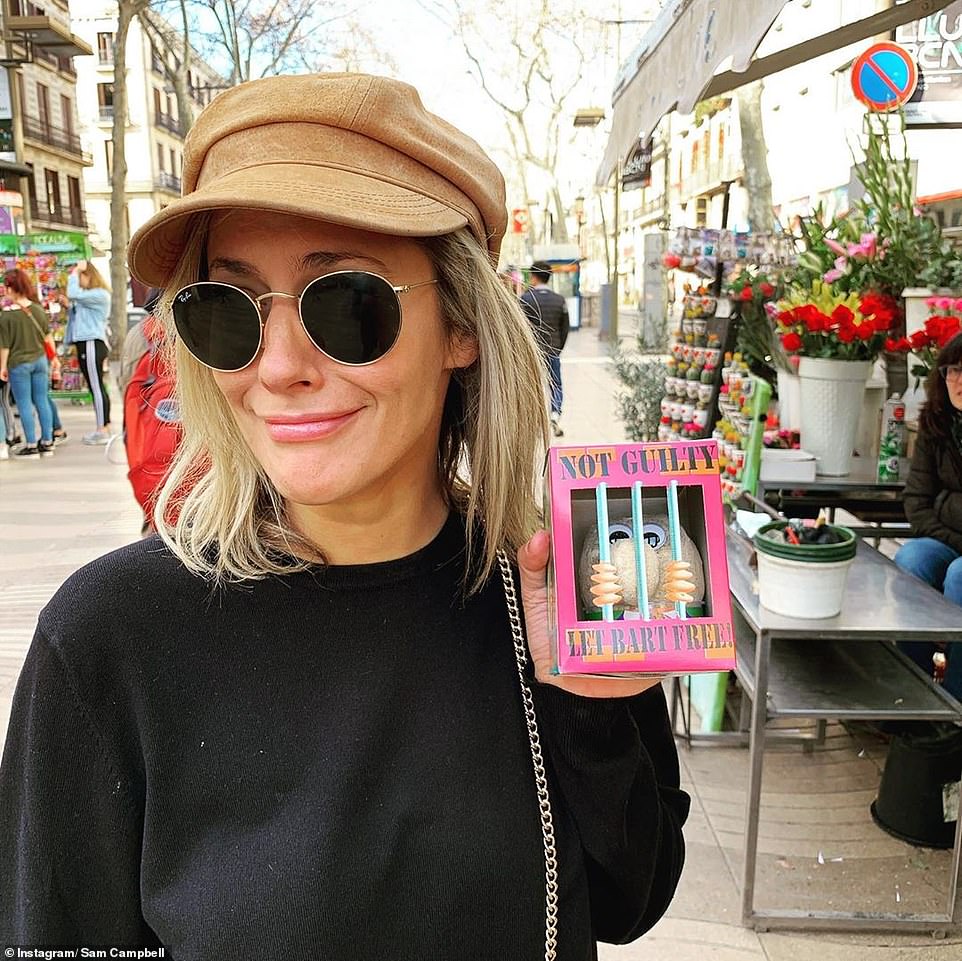 Sam Campbell took Flack along with her on a work trip to help keep her spirits up, but found the Love Island presenter was ‘calm and hopeful, but so weak’ even while away on holiday 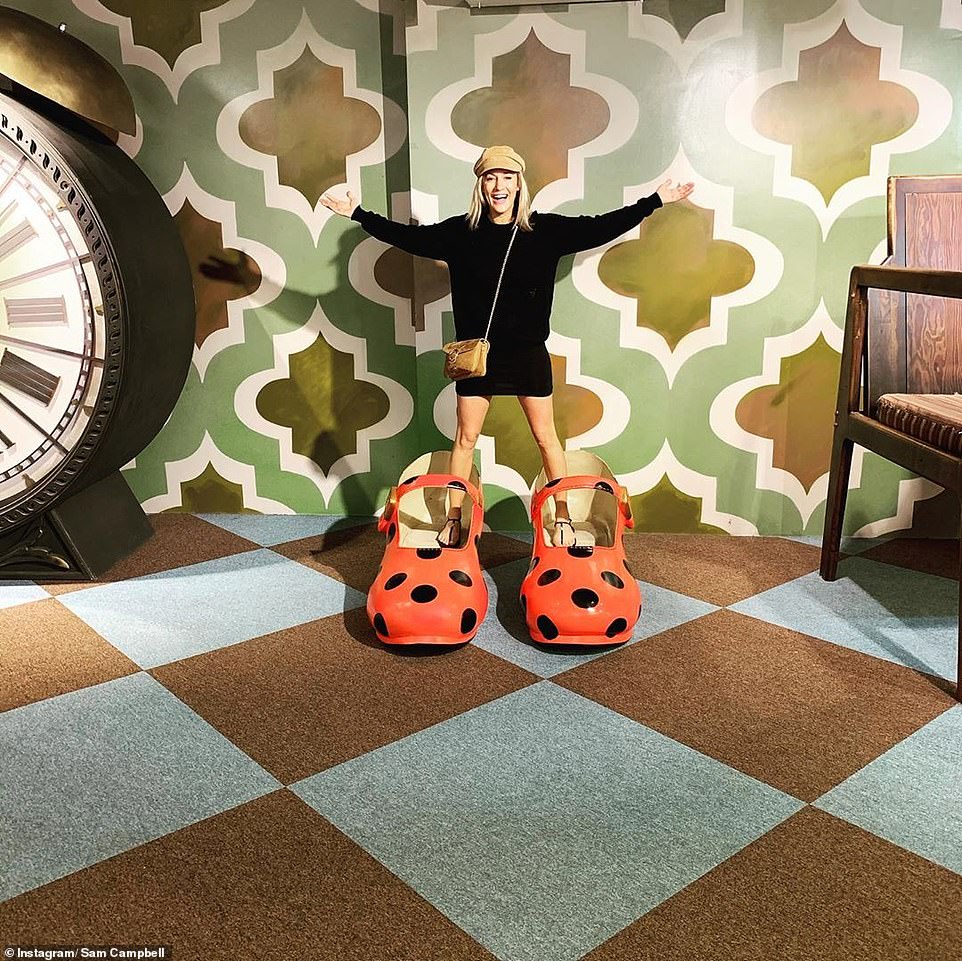 Writing a tribute to her friend on Instagram, Ms Campbell said: ‘I’ve lost count of all our holidays and trips. Last week she tagged along on a work trip to Barcelona with me. Waiting in the hotel while I did meetings’ 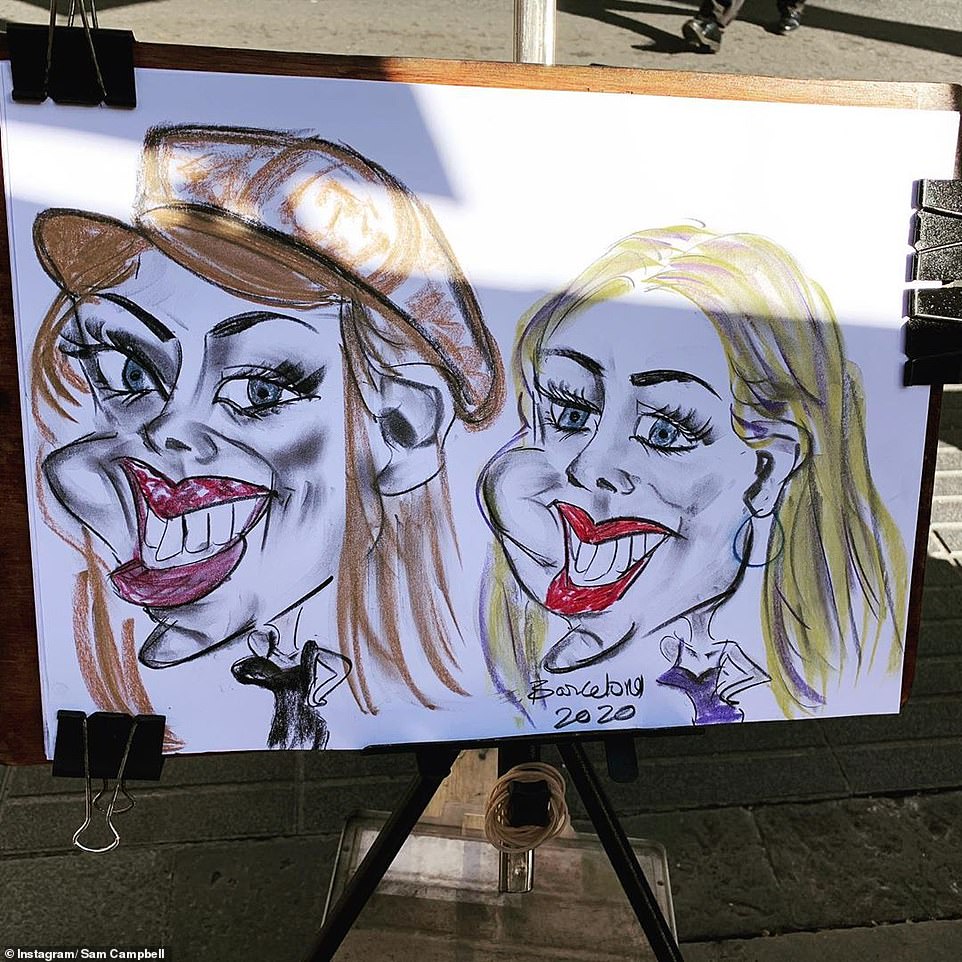 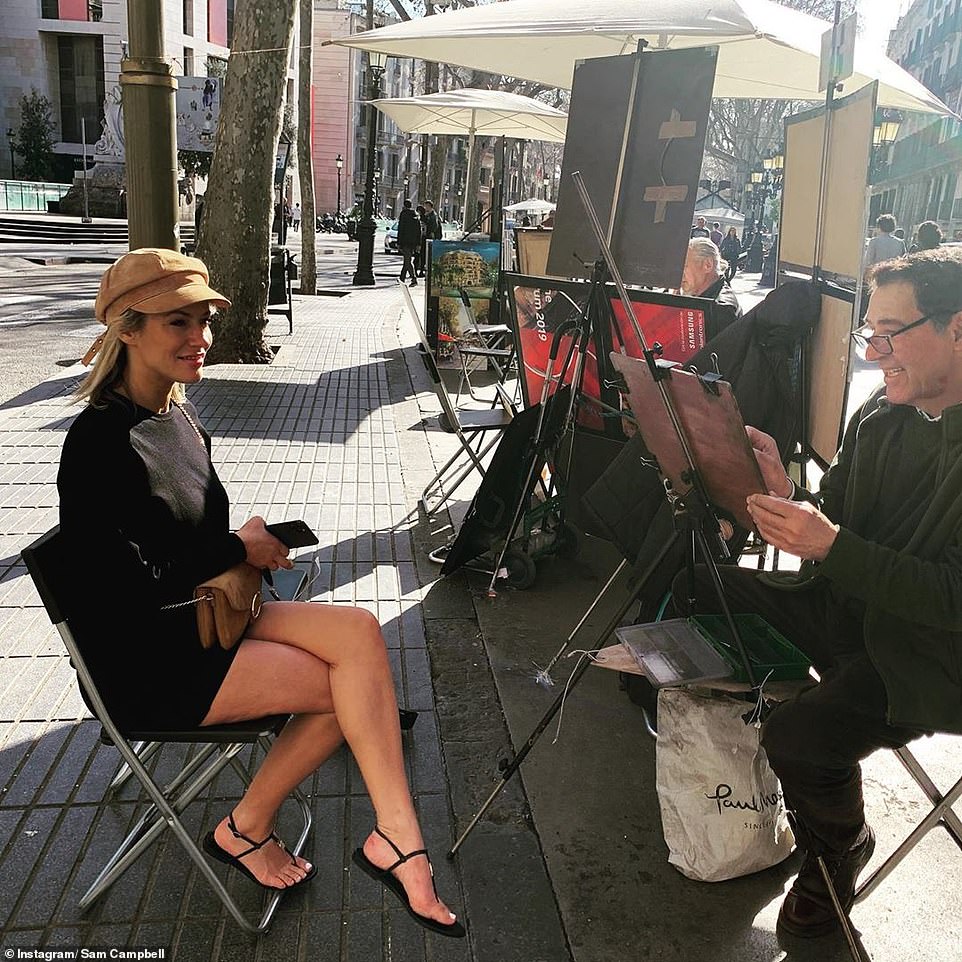 ‘I’m so so glad she came and we got to have one more adventure together and a few last laughs,’ Ms Campbell wrote

‘We went on a tuk tuk, walked, saw the sights, went to a house of curiosities and got our caricature done.

‘We’d go for dinner then watch Ab Fab till we fell asleep.

‘She was calm and hopeful, but so weak.

‘I’m so so glad she came and we got to have one more adventure together and a few last laughs. I miss you so much already xxxxx.’

Flack was pictured on a trip to a museum, smiling while in the back of a tuk-tuk, and holding up a cuddly souvenir with the words ‘not guilty’ emblazoned across it.

It comes after Caroline Flack’s best friend shared a heartbreaking photograph of the late Love Island host holding her eight-year-old daughter as a baby.

Miss Teasdale, who is known for being One Direction’s stylist, wrote: ‘Anyone have any nice advice for me with an eight-year-old learning about grief?

‘She’s lost two very special people who lived with us in the space of 12 months and I wanna make sure I’m saying the right thing – if there’s such a thing.’ 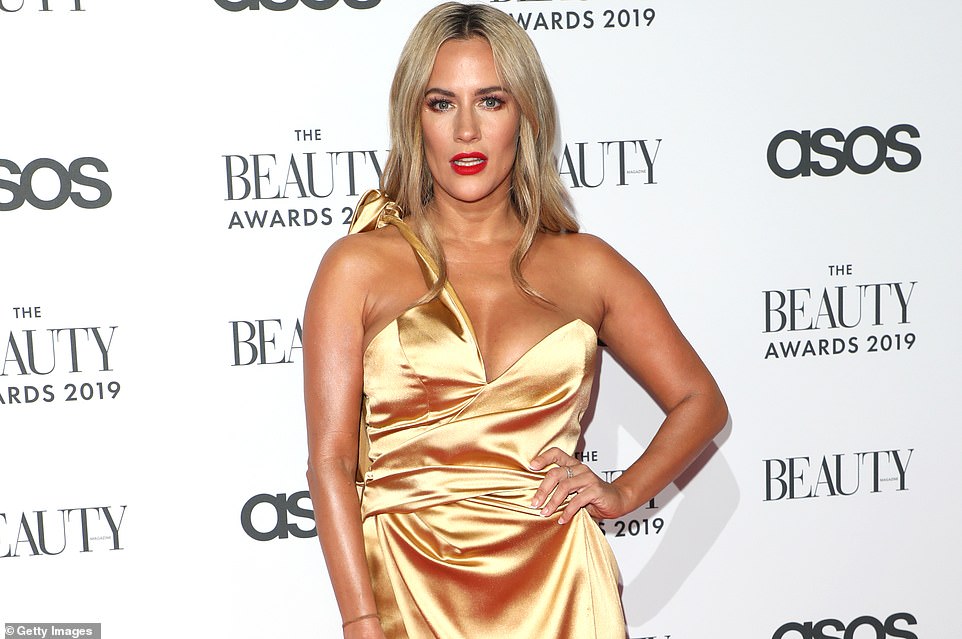 ITV was facing a reality show crisis last night after the suicide of presenter Caroline Flack, who tragically died on Saturday 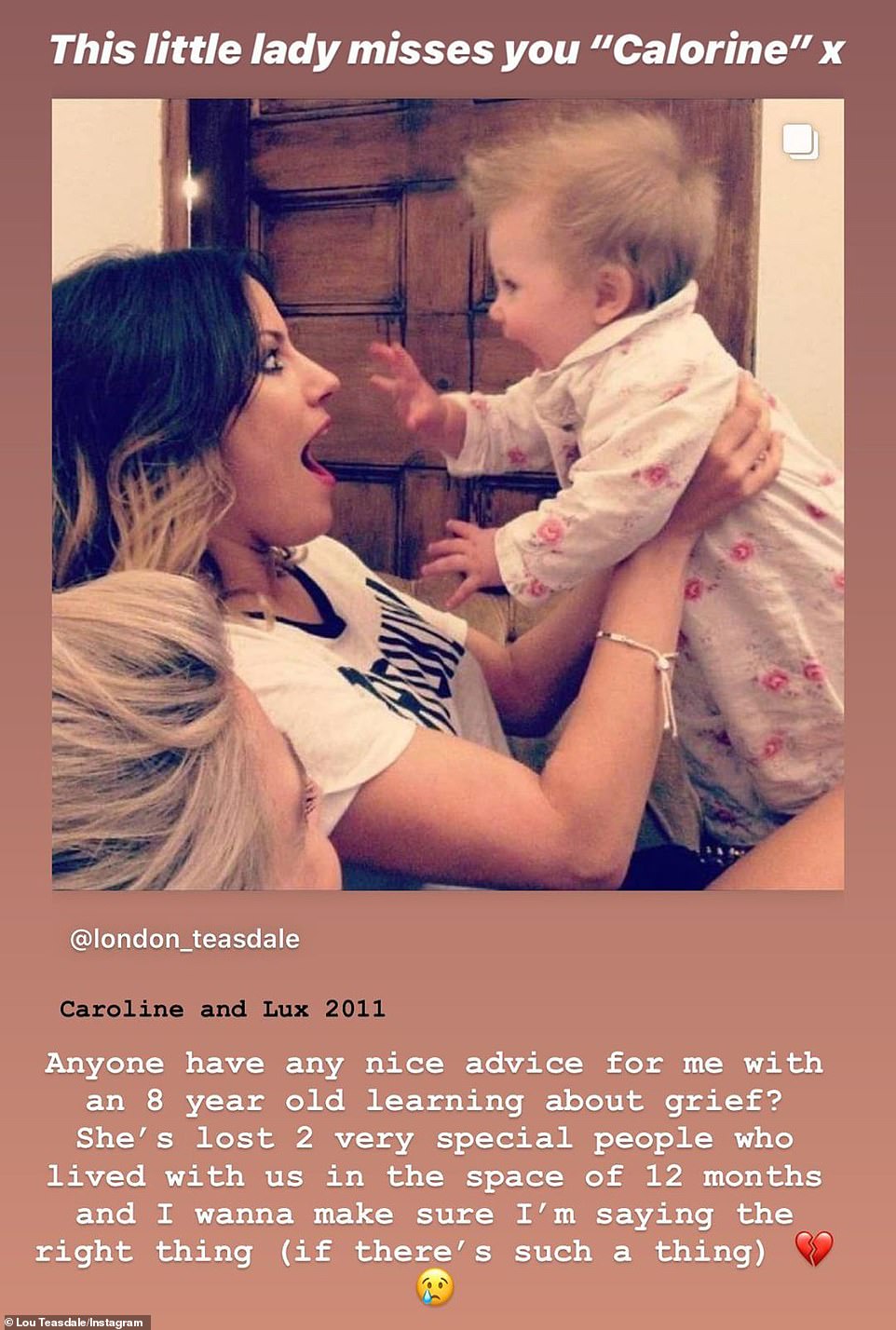 When Love Island returns tonight ITV will run a showreel tribute to Flack – as the broadcaster faces a reality show crisis.

After talks yesterday the decision was made to push ahead with the current series of Love Island, formerly fronted by Flack, which had already come under intense scrutiny after the suicides of two former contestants in the past two years.

Two episodes of the dating show were cancelled over the weekend but it is set to return to ITV2 and Virgin Media One tonight with a tribute to its former host.

However, TV critic Scott Bryan told the BBC’s Victoria Derbyshire programme that it was ‘just a bit too soon’ for the programme to return. 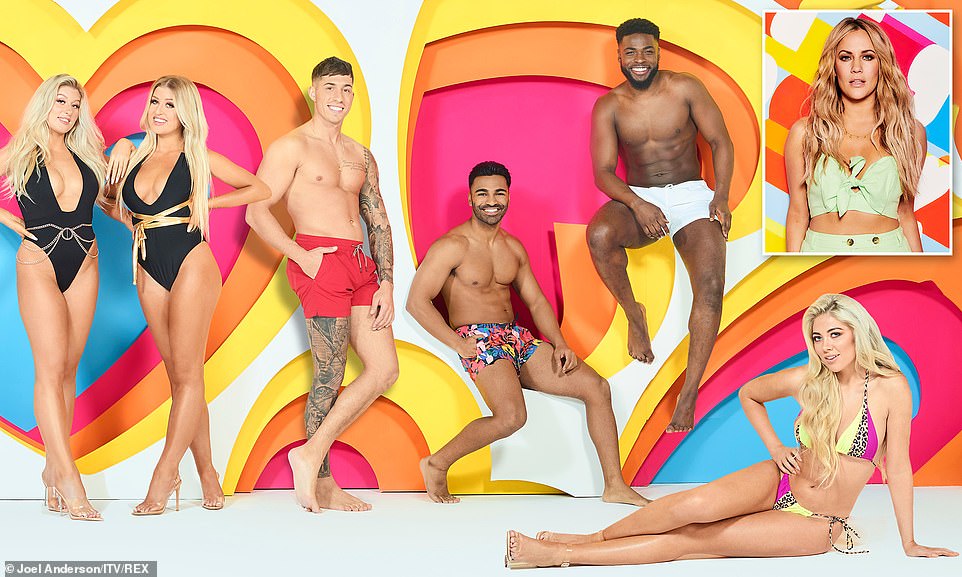 He said: ‘Of course there are viewers who would say, well, Love Island isn’t really connected to this. As you have rightly pointed out, the reasons why somebody takes their own life is due to a myriad of different factors.

‘Then some say that it should be as a tribute for Caroline, but also I think many people would say it just feels too soon. I think I’m in that camp – I feel personally it is just a bit too soon.

‘I think it’s just the fact that Love Island is such a bubbly show, such a warm show, such an uplifting show – and it just doesn’t feel like the cultural mood where we are as a country at the moment, I think.

‘I think it’s also just incredibly hard for the crew – Laura Whitmore speaking so passionately, I highly recommend people go and watch it – to continue, essentially, continuing the rest of the series when it’s incredibly difficult on their mental health.

‘But I also want to point out that this has been really devastating news during the weekend, particularly when it’s a familiar face.’

Flack stepped down from her presenting role in December after she was arrested for an alleged assault on her boyfriend Lewis Burton, 27.

The decision to press on with the show, which is due to finish next weekend, shocked industry insiders who expected the broadcaster to cancel it after her death. 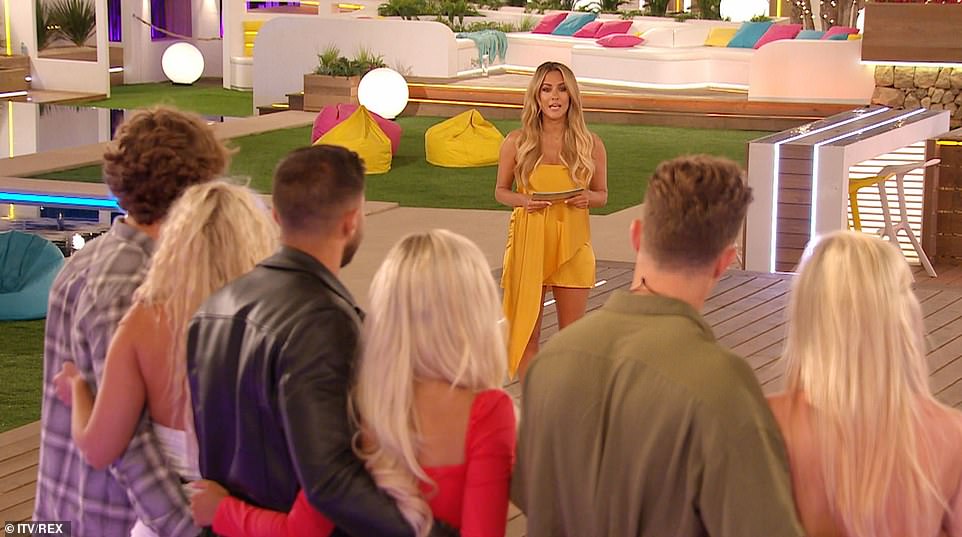 Two former contestants – Sophie Gradon and Mike Thalassitis – have taken their lives over the past two years, and Gradon’s boyfriend also killed himself weeks after her death.

One of ITV’s most high- profile presenters, Eamonn Holmes, questioned whether the series should continue out of ‘respect’ for Caroline Flack. Writing on Twitter he said: ‘Caroline Flack… Dear God. Shocked beyond belief. May she have found peace.

‘Has to be repercussions for Love Island now surely?’

He later added: ‘Meaning out of Respect, can the series continue?’

Love Island was replaced on ITV2 yesterday by Ibiza Weekender, which pulled in 341,000 viewers compared to 2,173,000 for Love Island the previous Sunday.

On Saturday, the show was replaced by You’ve Been Framed which attracted 163,000 viewers compared to 507,000 for Love Island the previous Saturday.

The main sponsors of Love Island, take away service Just Eat, said it was backing ITV’s decision to pull episodes at the weekend.

Yesterday sources at the broadcaster defended the organisation against suggestions it had not supported Flack enough after her arrest and subsequent charge for assaulting Lewis Burton.

After Saturday and Sunday night’s editions of the dating show were pulled, there had been speculation about whether the rest of the series would air at all.

But yesterday the broadcaster said it would be back tonight with a tribute to Flack.

Confirming that the show would air an ITV spokesman said: ‘Many people at ITV knew Caroline well and held her in great affection. All of us are absolutely devastated at this tragic news.’

Explaining the reasons for cancelling Sunday night’s show, he said: ‘After careful consultation between Caroline’s representatives and the Love Island production team, and given how close we still are to the news of Caroline’s tragic death, we decided not to broadcast Sunday’s Love Island out of respect for Caroline’s family.

‘Love Island will return on Monday night, which will include a tribute to Caroline, who will be forever in our hearts.’

Flack is the fourth person linked to the ITV2 dating programme to have killed themselves. Contestant Sophie Gradon, who took part in the 2016 series, was found dead in 2018 at the age of 32.

Her boyfriend Aaron Armstrong, 25, killed himself three weeks later. Mike Thalassitis, who took part in the show in 2017, was 26 when he was found dead in March last year.

Last night the hash tag #cancelloveisland was trending on Twitter. Users branded the programme’s format ‘toxic’ and questioned why it was still on air.

Flack, who was described as ‘vulnerable’ by her management, stepped down from presenting the winter series of Love Island after she was alleged to have assaulted Burton at her flat in Islington, north London, in December.

She entered a not guilty plea to a charge of assault at Highbury Corner Magistrates’ Court and was released on bail, with conditions that she stopped contact with her boyfriend ahead of a trial due to begin next month.

For confidential support call the Samaritans on 116123, visit a local branch or go to www.samaritans.org 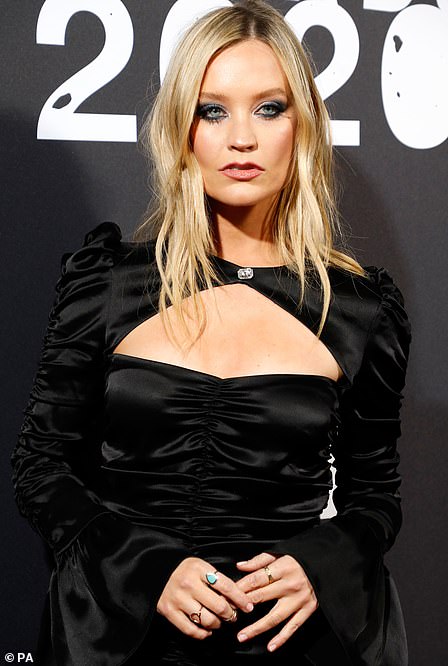 The presenter was tearful as she opened her radio show yesterday by criticising media scrutiny and those who ‘demonise and tear down success’.

She also appealed to listeners to ‘be kind’ to others after her friend’s death.

Miss Whitmore, 34, replaced Miss Flack for the current series of the ITV2 reality show after she was arrested for assaulting boyfriend Lewis Burton.

‘At aged 40 Caroline Flack made a decision to take her own life and I am going to talk about her and give her the respect that she deserves,’ she said when opening her BBC 5 Live show.

She said Miss Flack was ‘vivacious, loving and had a passion for life’.

She added: ‘I’m not going to pretend that she was perfect but is anyone?

‘She lived every mistake publicly under the scrutiny of the media.

‘Caroline loved to love. That’s all she wanted which is why Love Island was important to her because the show is about finding love, friendship, having a laugh.’ Miss Whitmore made clear that the show, which has been criticised after the suicides of two former contestants, was not ‘the problem’.

‘The show is loving and caring and safe and protected. The problem is the outside world is not.’

She added: ‘To the Press who demonise and tear down success, we’ve had enough. To paparazzi and tabloids looking for a cheap sell, to trolls hiding behind a keyboard, enough.

‘So listeners, be kind, only you are responsible for how you treat others.’

Others also paid tribute to the late star. Singer Olly Murs, 35, who presented X Factor with Miss Flack said she was his ‘sister’ and he had not ‘stopped crying’.

A visibly upset Mr Schofield said: ‘We’d like to take a moment to remember Caroline Flack in light of yesterday’s awful news. We wanted to say that our hearts go out to her family and friends.’