THIS is the moment a furious neighbour hurled a bin over a North Korean asylum seeker and yells at her “you’re not from this country”.

The footage appears to show the resident arguing with the woman, identified as Myungseo, who then appears to throw a bin over her and then push her. 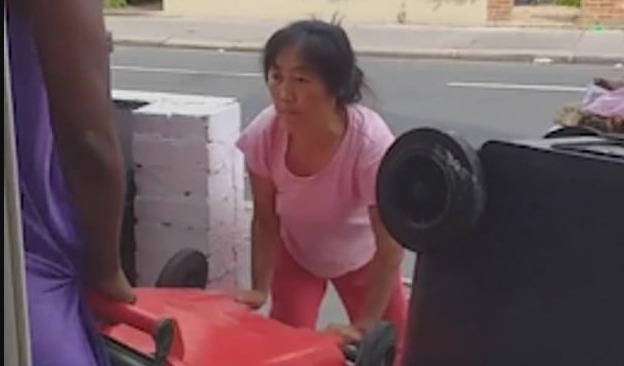 The neighbour can be heard yelling at Myungseo: “You're an asylum seeker. You're not from this country.”

Myungseo, who lives in Croydon, London, posted the two clips on Facebook.

She wrote: “It's only me and my children, we don't have any relative or friend in the UK and this situation is affecting my mental health and my children's wellbeing.”

Myungseo said she moved to the property with her kids in November 2019 and didn’t know how the rubbish collection worked but claimed she asked and agreed with her neighbour to share the bins.

Trouble started though when she moved the bins to the other side to stop leaves falling inside them.

Myungseo said she did not initially contact the cops because her English wasn’t very good and “didn’t know what to say” but added she had told Migrant Help.

The police were eventually called after a row erupted in May this year which is said to have been sparked over a blocked rain gutter.

Myungseo wrote on Facebook: “I defended myself so when the police came I told them I had twisted her arm.

“My neighbour told the police we would resolve the issue ourselves and the police told me that they could not help me because I did not have evidence of the neighbour physically attacking me.”

Myungseo said in her post: “She is taking advantage of a woman and two children with nobody here to protect us.

“I feel like a failure because I can't protect my children from this despicable woman.

A spokesperson for the Metropolitan Police said: “On Friday, 29 May, police received two separate reports about an altercation outside an address in Bensham Lane, Croydon.

“Officers attended the scene and spoke with both parties involved in the incident who each made counter allegations that the other had assaulted them.

“Police spoke with the parties about how best to resolve the issue. Both parties agreed to a community resolution.

“No arrests were made.”