Soccer mom and dads beware! Furious youth soccer referee posts videos of ‘jerk’ parents fighting on the sidelines and offers $100 for footage of brawls in a bid to stop the ‘toxic environment’ 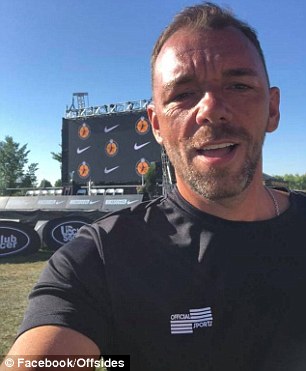 A youth soccer referee who is fed up with parent misbehavior on the sidelines has decided to shame them by posting videos of their antics online.

Brian Barlow, 44, has been a youth league referee in Tulsa, Oklahoma for 14 years, and finally became so fed up with outrageous parent behavior that he launched a Facebook page called Offside to shame them.

‘I do it to hold people accountable — to identify and call out the small percentage of parents who nonetheless create a toxic environment at youth sports,’ Barlow, told the New York Times in an article published on Wednesday.

‘It’s a very visual deterrent, and not just to the person caught on video but to others who ask themselves: Do I look like that jerk?’

Soliciting videos from across the country, Barlow offers to pay a $100 bounty if he decides to publish a submitted video.

‘It’s the 2 per cent of people who make an absolute a** of themselves at a sporting event, usually a youth sporting event,’ he explained in a video on the page. ‘It’s the people that are sitting on a sideline, usually in a chair… probably couldn’t run a 100-yard dash if you gave them five minutes and a hundred dollar bill.’ 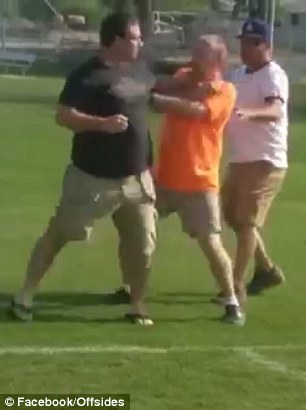 Parents are seen brawling on the sidelines in a video shared by Offside. Barlow refers to parents who can’t control their tempers at youth games as ‘cheeseburgers’

And watch the kid player trying to contain and control adults, if this doesn’t change your ways get off my page and join WWE, this is what you’re making youth sports, unreal.

Barlow, who works in marketing, says that the videos have had a positive effect on some parents.

One who was caught acting out even reformed so much that she decided to become a referee herself.

But for some rage-a-holics, the public shaming doesn’t seem to spur self-reflection.

Barlow told the Times: ‘Some people, frankly, want to punch me in the mouth.’