‘So much for suspense, Gary!’: Sports Personality of the Year host Gary Lineker seemingly gives the game away as he introduces Ben Stokes as the ‘main award winner’ in the middle of the show

Gary Lineker has been accused of ‘giving the game away’ after introducing England cricketer Ben Stokes as the ‘main award winner’ in the middle of this year’s Sports Personality of the Year show.

The presenter apologised for his gaffe, clarifying that Stokes is a ‘contender’ and not the winner after a clip of the cricketer’s exploits played.

Stokes is the bookie’s favourite to win the award, which is voted for by the public, after a stellar year which saw him lead England to World Cup glory.

Public voting had not even opened yet when Lineker made his introduction. 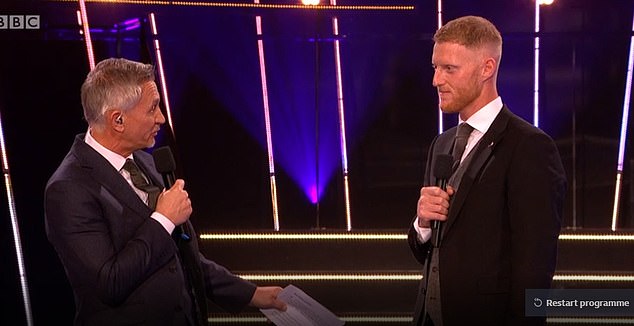 Gary Lineker introduced Ben Stokes as the winner of the main award, even though voting has yet to open

Viewers were quick to take to Twitter and complain that Lineker had spoiled the show early.

One watcher wrote: ‘Did Lineker just give away the game there?’

While a third said: ‘Gary Lineker just referred to Ben Stokes as the ‘main award winner’ then had to change it to ‘contender’ and now he’s all flustered. Whoops!’