‘She has changed the game in so many ways’: ‘Proud’ Gayle King pays tribute to her ‘one of one’ friend Serena Williams referencing Beyonce lyric after her first round win at the US open

Gayle King paid tribute to tennis legend and friend Serena Williams last night, telling her on-court she’s ‘one of one’ in reference to a lyric by Beyoncé.

The CBS host interviewed Williams after her first round win at the U.S Open on Monday, which is expected to be the final tournament of her glittering career.

‘Serena, you know, you’re like that Beyoncé song: “I’m one of one. I’m the only one. Don’t even try to compete with me,”‘ King said, a reference to Beyoncé’s ‘Alien Superstar’, that was released this year with her latest album ‘Renaissance’.

Having previously announced her intention to ‘evolve’ away from tennis after this year’s US Open, Williams breezed by her first-round opponent, Danka Kovinić, 6-3, 6-3, in Queens on Monday night.

Williams could not have picked a better venue to begin her farewell than Flushing, where she’s won six singles titles and a pair of doubles crowns in front of New York celebrities, many of whom were seen sitting together on Monday night.

King, who is a friend of Williams’ and who has interviewed her on previous occasions, took to the court to introduce her to the adoring crowd.

‘You started thinking about the accomplishments on and off the court. How she has changed the game in so many ways,’ King said. 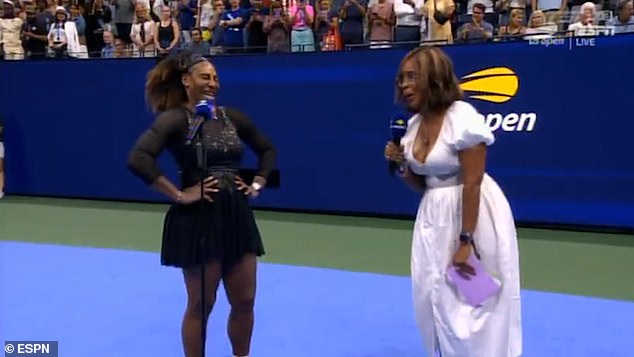 CBS host Gayle King (right) paid tribute to tennis legend and friend Serena Williams (left) last night, telling her on-court she’s ‘one of one’ – in reference to a lyric by Beyonce 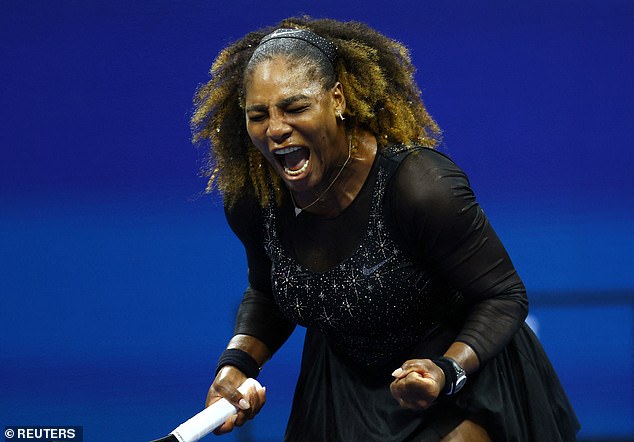 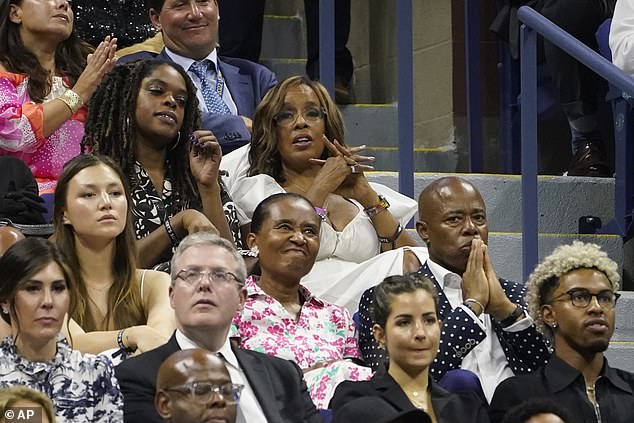 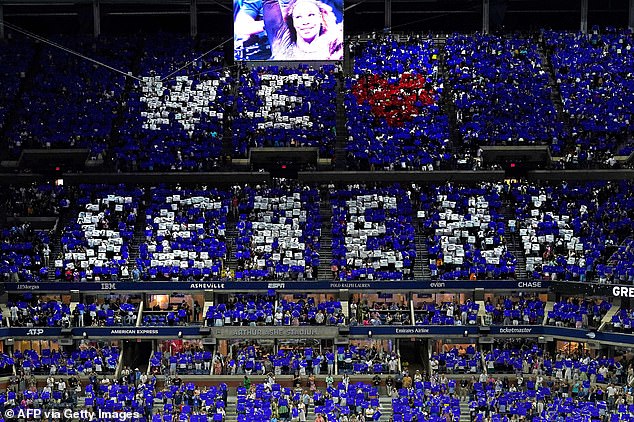 People hold up signs reading ‘We love you Serena’ during a ceremony following her first-round win at the US Open, during which she was interviewed by Gayle King

It was then that King referenced the Beyoncé song – a reference that was met with rapturous cheers from the crowd in Flushing Meadows.

King turned the topic to Williams’ impending retirement, with this year’s U.S. Open expected to be her final tournament. The interview was part of a strange post-match ceremony celebrating her career, despite it not yet being over.

‘Y’know it’s only been three weeks for us. When you got up this morning, did you feel a sense of relief? Did you have confidence in the decision? Because watching you tonight, we’re thinking: ‘You ain’t ready either!’ What are you thinking Serena?’

‘First of all, thanks, I didn’t expect any of this,’ Williams said to more cheers.

‘I’ve always got to do the best that I can, y’know. I feel so comfortable on this court and in front of everyone here,’ she said. ‘When I step out on the court I just want to do my best that I can do on that particular day, and that’s really all I can do.’ 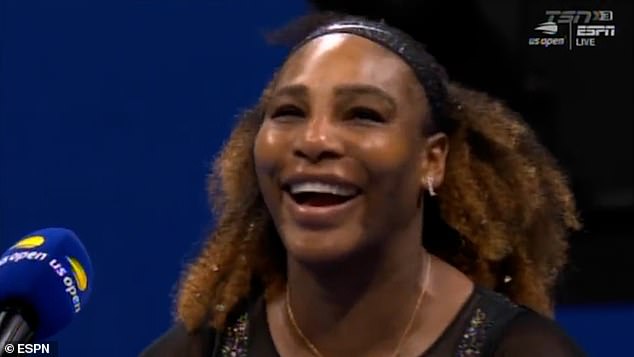 Pictured: Serena Williams laughs as she soaks up the atmosphere in the Arthur Ashe Stadium on Monday night in Queens 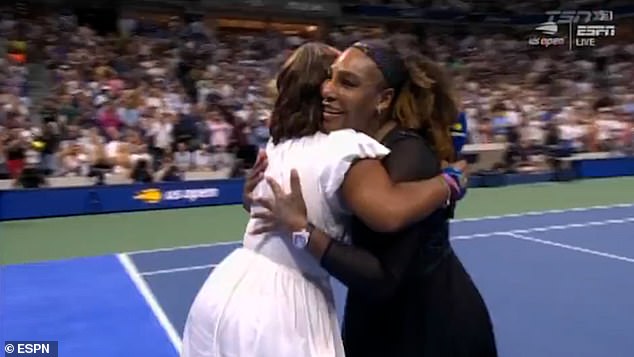 ‘You felt the crowd with you tonight, I know you did,’ King said.

Williams agreed. ‘The crowd was CRAZY!’ she shouted into the microphone, to more deafening cheers from the stands. ‘It really helped pull me through.

‘I just want people to think how hard one tries,’ Williams continued. ‘It’s so important to give your all no matter what you do, how many obstacles you face.

‘I’ve been down so much so many times, in the public eye, and I’ve had to come back… but never give up.

‘It sounds cliched, but no matter what you’re going through, I just want people to be inspired by my story. I’m from Compton, California, and I made it.’ 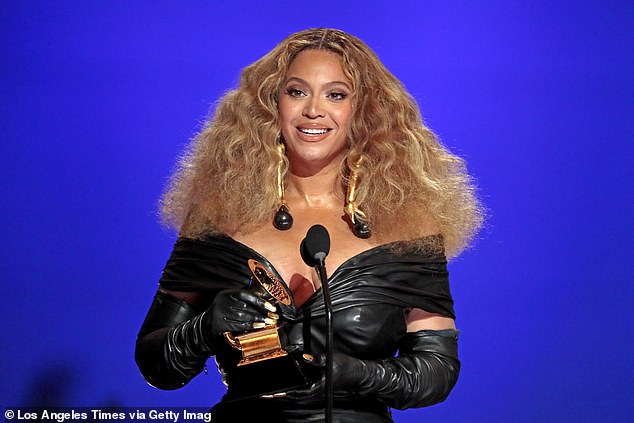 ‘Serena, you know, you’re like that Beyoncé song: ‘I’m one of one. I’m the only one. Don’t even try to compete with me,” King said, a reference to Beyoncé’s ‘Alien Superstar’, that was released this year with her latest album Renaissance

Williams gave the clearest sign yet that the U.S. Open will indeed be her last tournament and expanded on that later in her press conference.

‘It’s extremely difficult still because I absolutely love being out there,’ said Williams. ‘The more tournaments I play, I feel like the more I can belong out there.

‘But it’s time for me, you know, to evolve to the next thing.’

Pressed if the U.S. Open was definitely her last event Williams again stepped back from the brink.

‘I’ve been pretty vague about it, right,’ smiled Williams. ‘I’m going to stay vague because you never know.’

A montage of Williams career played before she appeared on court that left the door open a crack for a return some day, ‘if you ever decide to return Queen your throne will be waiting’ ended the video.

A defiant Williams, however, made it clear she was not giving up that throne just yet. 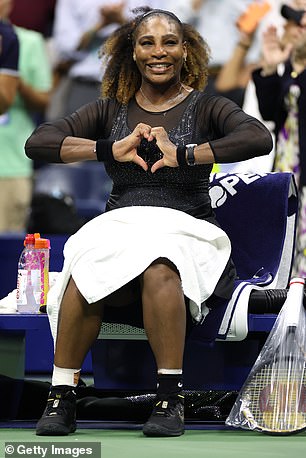 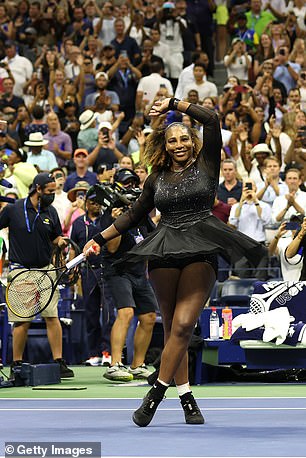 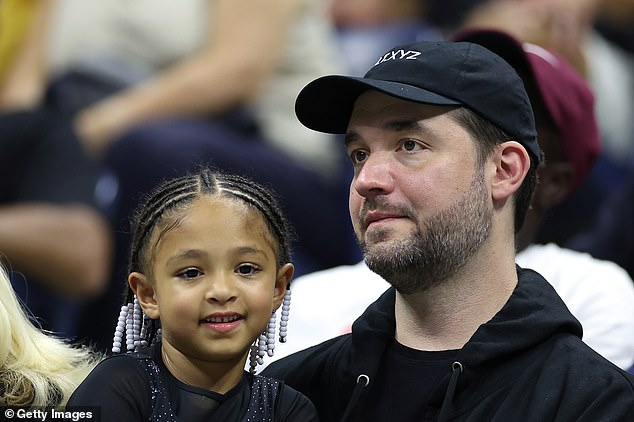 Serena’s husband Alexis Ohanian sat next to one of the evening’s biggest celebrities, the couple’s daughter, Olympia 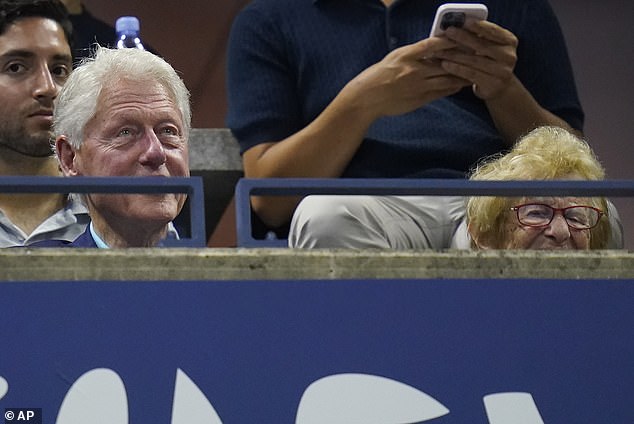 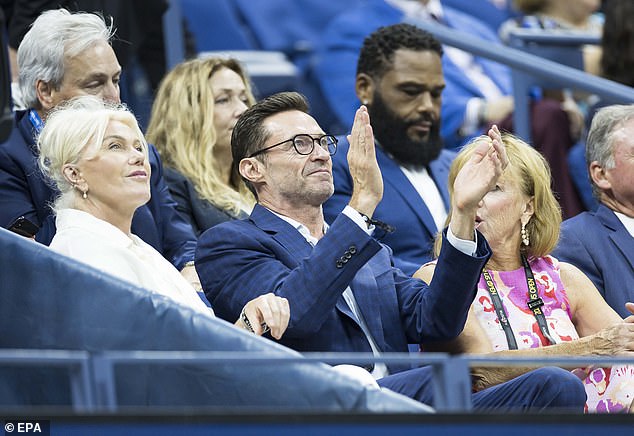 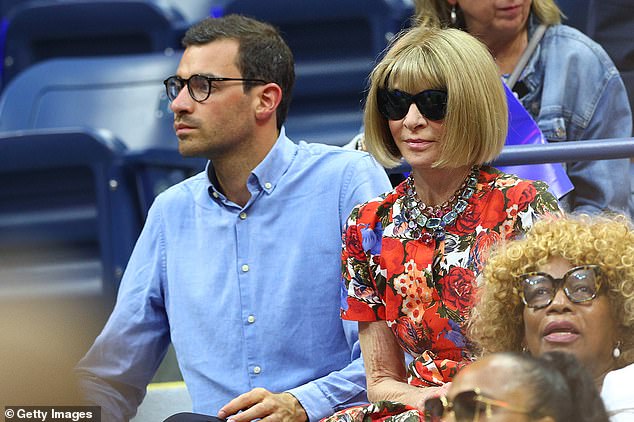 There is always excitement on opening night at Flushing Meadows but on Monday the teeming stadium crackled with a special energy from the moment Williams appeared on court decked out in a shimmering black robe and specially designed diamond encrusted shoes.

The outfit may have sparkled more than the 40-year-old’s play but it did not matter to a jam-packed Arthur Ashe Stadium as Williams’ fighting edge remained razor sharp even if her serve and ground strokes were not.

Certainly there was no more fitting place to bring the curtain down on one of tennis’s most phenomenal careers than in a city that has been in her corner from the very beginning, fuelling runs to six U.S. Open crowns. 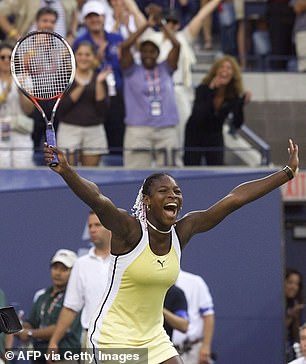 The magnitude of the moment was not lost on the 23,000 fans, including, former U.S. president Bill Clinton, designer Vera Wang, director Spike Lee and others who packed into Arthur Ashe not expecting to see greatness but to celebrate it.

Having been world number one for 319 weeks, Williams arrived in New York ranked below 600 and unseeded. But even with Williams far from her best the odds were stacked against the 27-year-old from Montenegro.

Playing in her 21st U.S. Open, Williams has never lost in the first round and her victory over Kovinic was her 106th at Flushing Meadows.

While Kovinic has been enjoying the best Grand Slam season of her career reaching the third round of both the Australian and French Open, she had not won a single match since Roland Garros.

As play got underway it was Williams showing signs of nerves, piling up the double faults as Kovinic got in front 3-2.

But Williams, as she has done so many times, lifted her game when she needed to, sweeping the next four games to snatch the first set.

Now in charge, Williams would not let it slip away in the second set, breaking to go up 3-2, and with match point and the crowd on its feet, she danced in delight as Kovinic’s return hit the net.