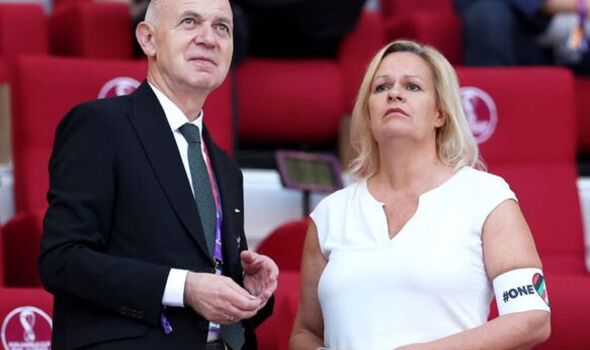 German minister Nancy Faeser has been spotted in the stands at the World Cup in Qatar wearing the OneLove armband.

As this picture shows she has it on display while with FIFA President Gianni Infantino.

The armband has become controversial during the tournament with England skipper threatened with a yellow card if he wore it for the Three Lions first match.

Fans have been displaying flags and sporting items of clothing featuring pro-LGBTQ+ colours and messaging in protest over Qatar’s treatment of the community.

Qatar law calls for a prison sentence of one to three years for “inducing or seducing a male or a female in any way to commit illegal or immoral actions”.