Norbert Rottgen, chairman of the German foreign affairs committee and an ally of Angela Merkel, insisted granting Britain a longer Article 50 extension “would have been better” for the EU. He claimed the French President was demanding a brief delay to benefit his own European Parliament election campaign. On Twitter, Mr Rottgen wrote: “A longer Brexit extension would have been much better!

“But Macron prioritised his own election campaign and interests over European Union.

“The UK now needs to use the new deadline to either decision on the case or a political path forward.

“Good news: time should be sufficient for that.”

The German’s rant comes after EU leaders agreed to delay Brexit until October 31 with a “review” of the process to take place at June’s European Council summit. 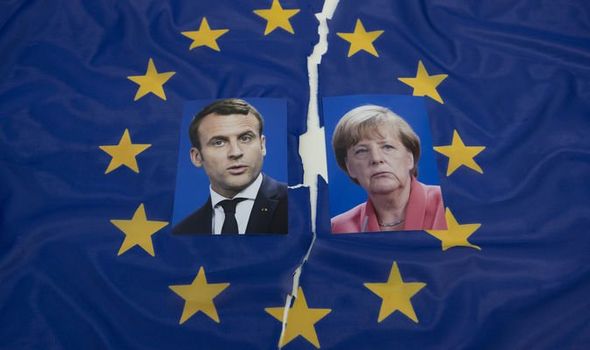 Mr Macron was left entirely isolated in his push for a short Brexit delay, according to a senior EU official.

The source said: “Of the EU27, 19 member states supported a longer extension, 7 were in between and the rest went short.”

Donald Tusk, the European Council President, warned Mrs May not to “waste this time” given to her.

He refused to rule out another extension though, adding: “I am too old to exclude another scenario.

“I think still everything is possible.”

Mrs May said: “What we have agreed tonight means that we can leave the European Union before June 30. What we need is to ensure that we have an agreement in parliament, that we can get through the necessary legislation to enable us to leave. This decision enables us to do that.”

Mr Macron, who was largely blamed for the lengthy talks, said the six-month delay was the “best possible compromise” to protect the EU’s interests.

He added it was now “up to Britons to be clear with themselves and their people” about possible participation in the EU Parliament elections next month.

Mark Rutte, the Dutch prime minister, warned colleagues that they could have a battle over another extension on their hands in six months.

He said: “I would expect this is the last delay.

“On October 31, the British will either have agreed to a deal, have decided to cancel Brexit or leave without a deal. But then we will have had six more months to prepare for that.”

He added: “At the end of October we are six months down the road, so it will be increasingly difficult to grant extensions.”