A terrifying video shows exactly how coughing on an airplane can spread the deadly coronavirus through a cabin.

The visualisation was created by Purdue University, Indiana, a few years ago to show how coronavirus pathogens travel far further than expected.

It shows how saliva droplets from one cough cause an initial plume of germs, which then spread throughout the plane in the air.

Up to ten people around the cougher are highlighted as most at-risk because of their proximity – but some bugs spread to each corner of the cabin.

The simulation reflects viruses that are airborne, meaning they linger in the air. But scientists aren’t completely sure SARS-CoV-2 fits into this category.

Some evidence suggests that droplets from an infected person may travel through the air of offices, restaurants and planes via air conditioning.

It follows a study by US officials which found one infected person spread SARS-CoV-2 led to 43 per cent of their colleagues in their office in South Korea.

The GIF from Purdue University School of Mechanical Engineering shows how tiny invisible droplets from a single cough can flow through the cabin of a Boeing 767 passenger jet.

Scientists made it in 2014 to study infectious-disease transmission on aircraft so they can inform on optimal and safe ventilation systems.

‘The transmissions of infectious diseases could take place in commercial airliner cabins.’

The model was based on the assumption that the 2003 SARS virus was an airborne disease.

This means the germs from a person’s breathe, sneeze or cough can linger in the air and travel because the droplets are very small in size.

According to the World Health Organization, COVID-19 virus is primarily transmitted between people through respiratory droplets, which are much larger in size.

Larger droplets only travel short distances before falling to the floor, which is why it the ‘safe social distance’ recommended between people is two metres.

Aerosols, on the other hand, are small and can linger in the air for longer and travel further – such as that seen in the GIF.

But there is some compelling evidence to say that SARS-CoV-2 is airborne, despite most of it not being subject to peer review. Or at least, air conditioning systems are to blame for fuelling the virus round a room. 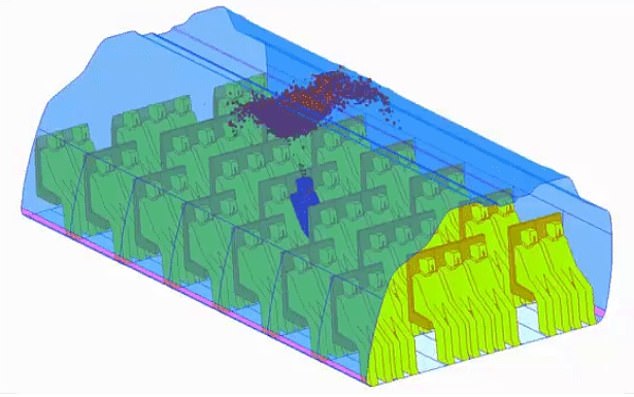 A terrifying GIF shows exactly how a cough on an airplane can spread the deadly coronavirus through a cabin. It was created in 2014 by Purdue University in Indiana 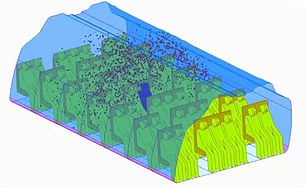 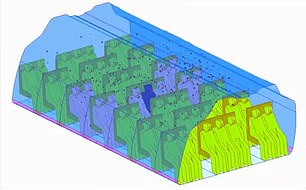 It shows how the saliva droplets from one cough cause an initial plume of germs, which then spread throughout the plane in the air

For example, scientists in the US have shown in the laboratory that the virus can survive in an aerosol and remain infectious for at least three hours.

However, the conditions were argued by the WHO to be highly artificial and did not represent what happens if someone coughs in real life.

Evidence is emerging that air conditioning may propel infected droplets round confined spaces – such as an airplane.

One report in a Centers for Disease Control and Prevention (CDC) journal on April 2 explained how a cluster of cases in Guangzhou, China, may have been fuelled by air-conditioning.

Ten people in three families were diagnosed with the virus after eating at the same restaurant. But the researchers said droplets from coughing and sneezing alone could not explain the spread of the virus.

Jianyun Lu and colleagues concluded that ‘droplet transmission was prompted by air-conditioned ventilation. The key factor for infection was the direction of the airflow.’

Another study published on April 23 in the same journal – Emerging Infectious Diseases – shone light on the ‘alarming’ spread of the coronavirus in an office.

Researchers in Seoul, South Korea, traced thousands of people who were at risk of infection after coming close to an individual with COVID-19.

They defined an at-risk person as one who worked at, lived at, or visited ‘building X’ during February 21 to March 8.

The team tested 1,143 people and 97 tested positive, 94 of whom were working on the 11th floor of a call centre. The first patient worked on the 10th floor.

There were 216 employees on the 11th floor, meaning the virus attacked 43 per cent. All those infected were on the same side of the room.

Shin Young Park and authors wrote: ‘This outbreak shows alarmingly that severe acute respiratory syndrome coronavirus 2 (SARS-CoV-2) can be exceptionally contagious in crowded office settings such as a call center.

‘The magnitude of the outbreak illustrates how a high-density work environment can become a high-risk site for the spread of COVID-19 and potentially a source of further transmission.’

Both studies were released early and are not final versions. 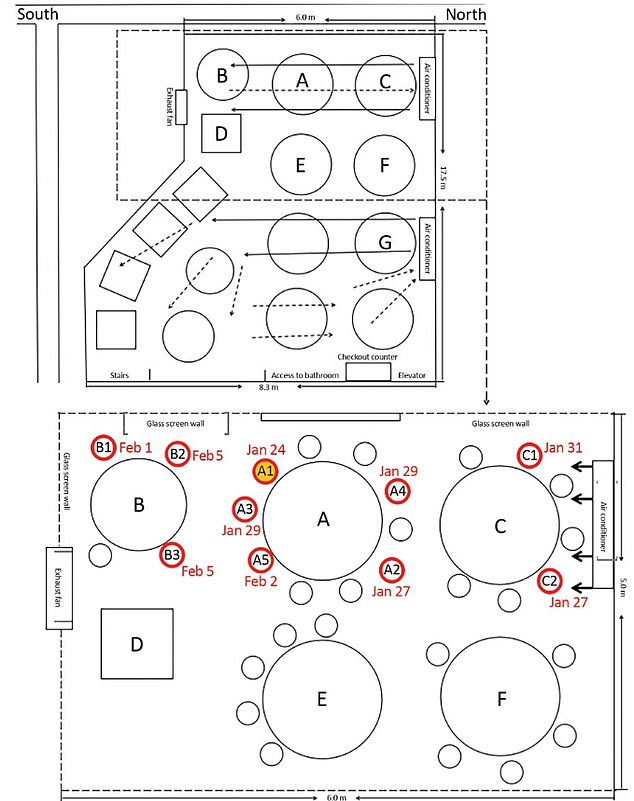 One report explained how a cluster of cases in Guangzhou, China, may have been fuelled by air-conditioning. Ten people in three families were diagnosed with the virus after eating at the same restaurant. But the researchers said droplets from coughing and sneezing alone could not explain the spread of the virus. Pictured, a sketch showing arrangement of restaurant tables and air conditioning airflow. The red circles indicate seating of future case-patients; yellow-filled red circle indicates the first patient 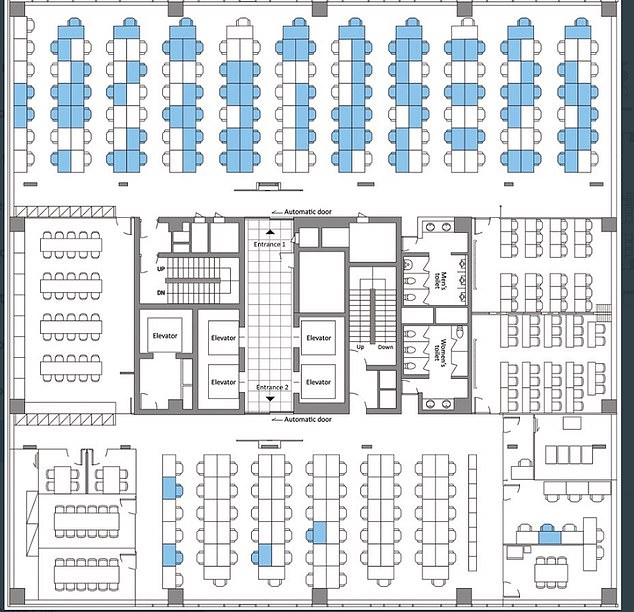 Another study in Seoul, South Korea, showed how one infected person led to 97 other cases, 94 of whom were working on the 11th floor of a call centre. There were 216 employees on that floor, meaning the virus attacked 43 per cent. All those infected were on the same side of the room (pictured)

A simulation appears to indicate that current social distancing guidelines may not be enough to keep joggers safe during the coronavirus pandemic.

The video, created by simulation technology company Ansys, shows that droplets cab spread more than six feet behind you while you are walking, running or cycling.

Because of this, running side-by-side with someone may actually be safer than running behind them so you don’t directly come into contact with any droplets, engineers say.

‘If we see a whale or dolphin blow through their blowhole, we can see the water and jump out of way if we have to,’ Marc Horner, the principal engineer for healthcare at Ansys, told DailyMail.com

‘But if someone sneezes or coughs, it happens so quickly and the droplets are so small, [the simulation gets] that mental image in your mind of how far away you need to stand so gravity has time to pull the droplets down.’

Federal health officials chose six feet as the guideline for social distancing because of the way that respiratory droplets travel.

When an infected person coughs or sneezes, droplets typically travel no more than six feet before gravity pulls them to the ground.

The video shows two scenarios: one in which two people are running side-by-side and another in which they are running one behind the other.

In the side-by-side scenario, when one person coughs or sneezes, the majority of the droplets travel behind the runners, not next to them.

This is what makes the scenario in which one person jogging six feet behind another person so unsafe, Horner explains.

‘If someone coughs, those droplets are suspended in the air and, if you are six feet behind, you are going to run right into them and it doesn’t give them enough time to fall to the ground,’ he said.

‘The droplets go straight out and go behind you so if you’re next to someone – ignoring wind conditions –  it won’t hit you.’

If you don’t feel safe enough running next to somebody else, run behind them in staggered formation, meaning not directly behind them.

Lorner says this will help prevent cough or sneeze droplets from landing directly on you.