‘I was watching the happiness on her face when suddenly the log fell’: Girl, five, died in front of her mother when playground swing ‘riddled with fungi’ broke and hit her head, inquest hears 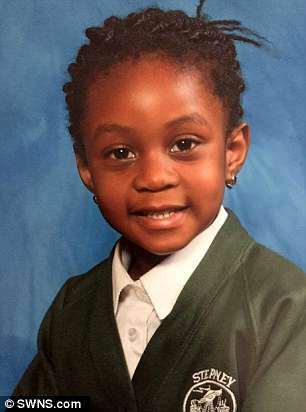 Little Alexia Walenkaki, five, died following the collapse of a swing in Mile End park in July 2015. The rotting log swing broke and smashed into her head

A five-year-old girl died in front of her mother after a log swing that was riddled with fungi, broke and smashed into her head as she played in a playground, a court heard.

Little Alexia Walenkaki died a day before her sixth birthday following the collapse of the swing in Mile End park, inquest jurors were told at St Pancras Coroner’s Court.

Alexia was playing with school friends and her cousin when the playground swing left her with devastating head injuries in July 2015.

A tree expert told the hearing that the log was suffering from a ‘blunderbuss’ of fungi, was in a poor condition and was of a type of wood he would not recommend for outdoor play equipment.

Arborologist Kevin Moore added that when he sent a sample to the lab there were so many different types of fungi they couldn’t say what had caused the decay.

Mother Vida Kwotuah was watching Alexia play in her local park after collecting her from school when she suddenly saw the swing begin to wobble.

The swing, from a poplar tree, had been installed three years earlier in the playground from a 28-year-old tree that had been cut down.

The log swung from a stump fixed into the ground and a nearby zip wire. 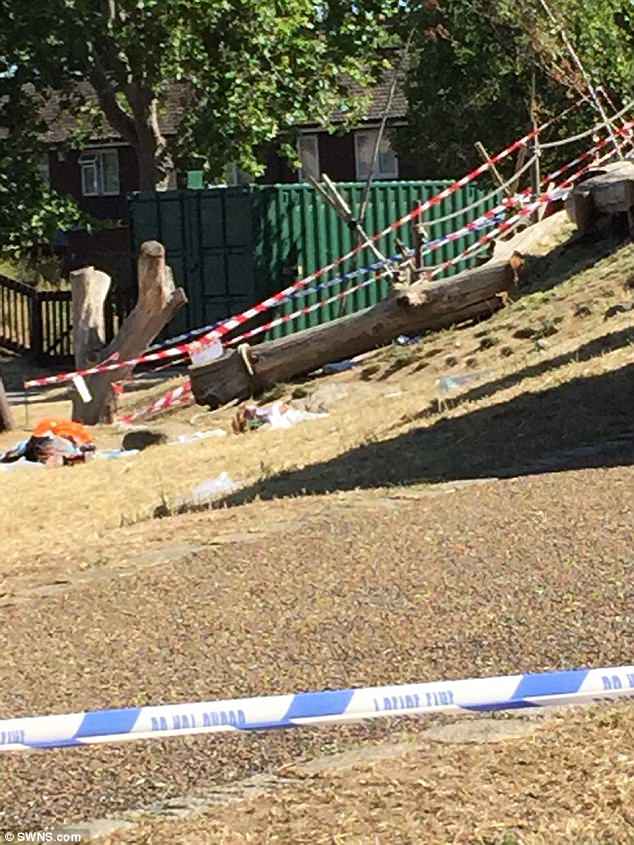 A tree expert told the hearing that the log was suffering from a ‘blunderbuss’ of fungi, was in a poor condition and was of a type of wood he would not recommend for outdoor play equipment. Pictured: Scene where the log broke

‘The base was just over three metres in length and you could seen it was incredibly decayed.

‘I took a sample and sent it to the lab but they were unable to ascertain what was decaying it as there were so many types of fungi.’

‘I was asked as to the general condition of it and I would describe it as very poor.

‘The fungi means that it would break suddenly, it would fracture rather than bend and break, it would snap rather like a piece of glass.

‘It may have started to decay when it was installed about three years ago.

‘With this species of wood it would be a matter of at least a couple of years.

‘The nature of fungi is that you do not see it until it is advanced.

‘When I spoke to the lab they described it as a blunderbuss of fungi inside, multiple organisms decaying the inside.

‘As an educated guess I would say it was a poplar tree, the tree was roughly 28-years-old when it was cut down and the condition of the tree is very poor.

‘Poplar and willow both toughen, they use willow for cricket bats, but they are not very durable and once the decay has set in they do not resist it very well.

‘In the salicaceae family once they are left out in the weather they decay very quickly.’ 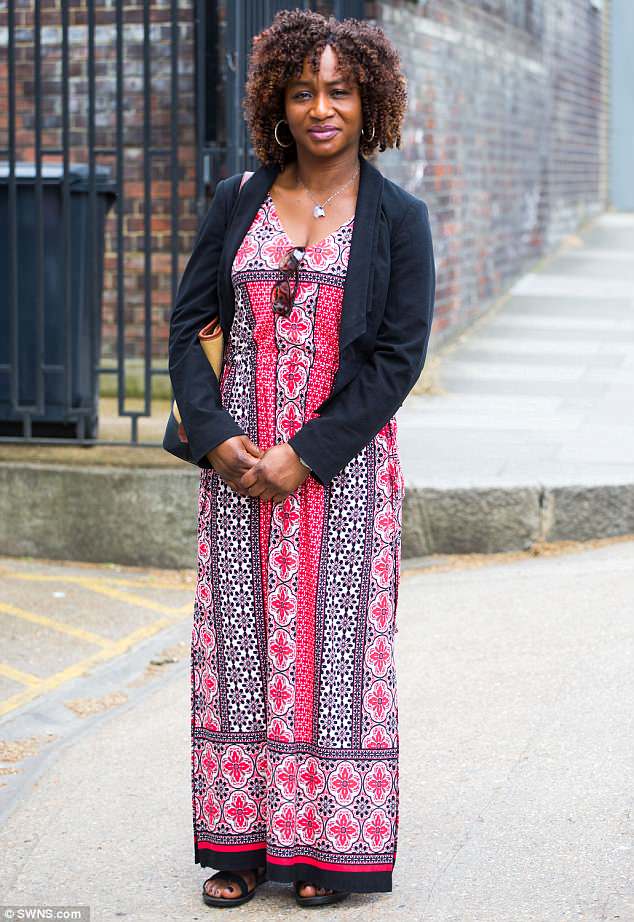 Her mother Vida Kwotuah (pictured) said: ‘Alexia was smiling and I was watching the happiness on her face when suddenly I became aware that the log was not in an upright position, it started to fall’ 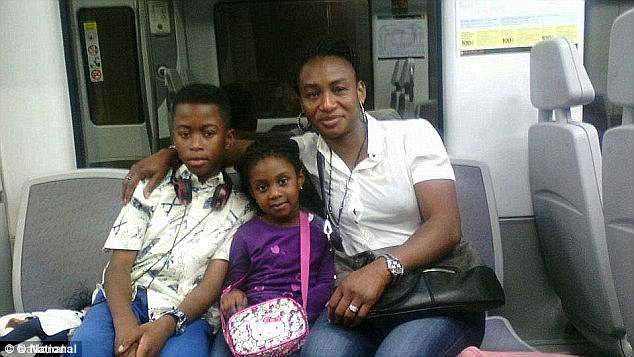 Alexia (centre) with her older brother Austin, 13, (left), and her mother Vida Kwotuah (right). She had been playing in the park with her mother when she was hurt by the falling tree

He added: ‘The tree fractured because it was so extremely decayed, it could not resist the load applied to it, it was not strong enough to support the load.

‘I was asked if it was suitable for play activity and it is not a species, if I had been asked, I would not have recommended because of its propensity to decay.’

As she watched the swing snap Ms Kwotuah rushed over to her daughter who was lying unresponsive on the ground coughing up blood and blood oozing from her nose shortly before 6pm, St Pancras Coroner’s Court heard.

Alexia was given CPR at the playground in Mile End, east London but sadly died an hour later on 17 July 2015, the day before her sixth birthday.

Mum Vida Kwotuah, of Poplar, east London, said Alexia was ‘our world’ and as an active child went to her local park almost daily.

In a statement, read by Senior Coroner Mary Hassell, she said: ‘She was our world. I lived with Alexia and her sibling who was very happy to have her as a sister. She was a blessing to have and cherished by our family.

‘We gave her a nickname which meant that she was a Ghanian warrior, she was an all rounder at sports and teachers asked me to slow down with her because she was ahead of her classmates.

‘She had many friends and was sociable and outgoing, she was definitely a leader and not a follower. My last memory is Alexia hanging from the rope with a smile on her face.’

Alexia was due to celebrate her sixth birthday the next day. Her mother described her as ‘really bright’, and said ‘everyone who saw her fell in love with her’

The heartbroken mother continued: ‘Alexia was with her cousin and some friends, this area in the park is not an area where Alexia would normally play, but it happened that some of her classmates were playing here.

‘I got up and ran towards Alexia as I knew that the log would hit someone.

‘Within a few seconds I saw that Alexia was already on the floor, she was lying on her right side, blood was starting to ooze from her nose, I was on the floor with her and she coughed up some blood.

‘I heard children screaming and I screamed, the woman I was standing with ran towards me and called an ambulance.

‘We arrived at the hospital and were told that Alexia could not survive the injury from the log and we were invited to sit with her.’ 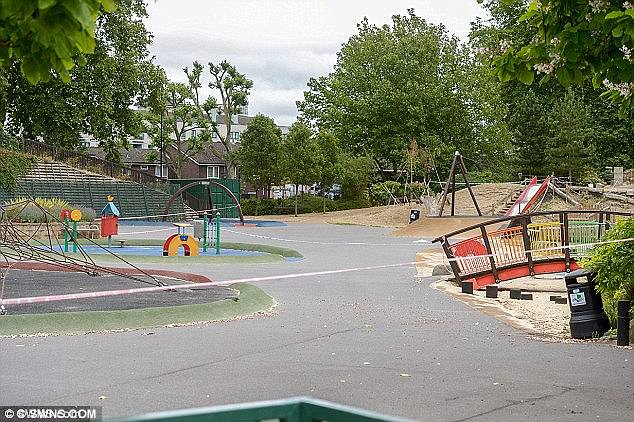 The playground where Alexia was injured was cordoned off today, and Tower Hamlets council has said it ‘would like to extend its deepest sympathies’ to the little girl’s family 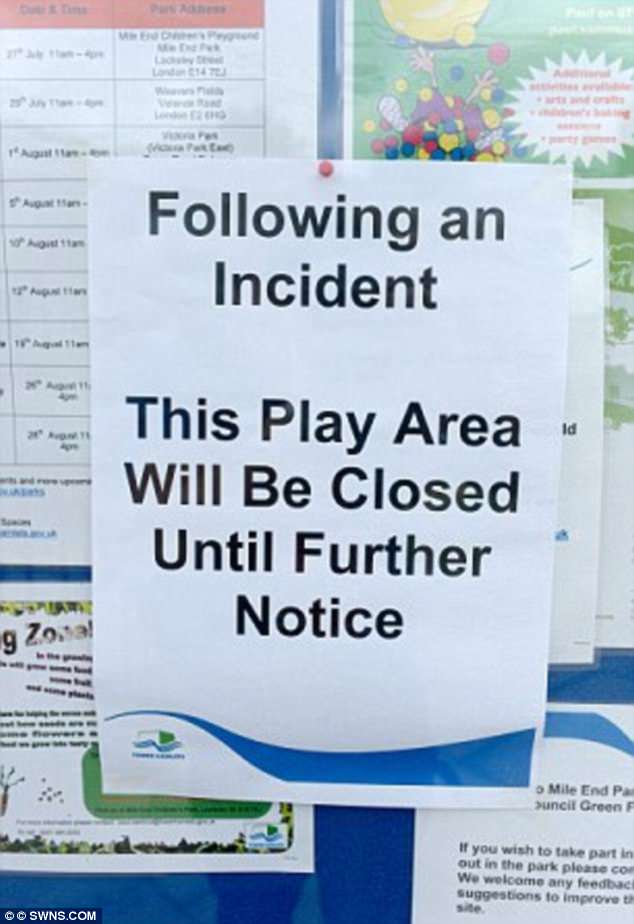 A sign posted outside the entrance to the play area said that it would be closed until further notice at the time, while friends of the little girl had left heartfelt cards playing tribute to her

The log swing was imported into the park as a piece of play equipment, not from a tree that had grown.

Detective Sergeant Andy Northop said: ‘She was in the park, it was 17 July 2015 at approximately 5.45pm.

‘She was playing in the park on a rope swing which was attached to a log, an imported log.

‘She was swinging around on the rope, the log began to wobble and it fell and unfortunately Alexia was hit by the log on the head and as a consequence that was what caused her death.

‘It was not a tree that ever grew, it was an imported log.’

She said: ‘Alexia suffered a severe head injury, a complex fracture to the bones on the left side of her face and her left collarbone.

‘There was also very significant bleeding to her head.’