Girl, ten, is sexually abused in an Indian cinema

Girl, ten, is sexually abused in an Indian cinema as businessman assaults her throughout entire movie in full view of child’s mother

A businessman has been arrested after he was recorded sexually abusing a 10-year-old girl in a cinema – while sat next to her mother.

Every second of the vile abuse was captured by a CCTV camera, which caught 60-year-old KV Moitheenkutty engaging in sexual acts with both the child and her mother.

But Moitheenkutty was arrested only on Saturday – despite the sickening abuse taking place on April 18. 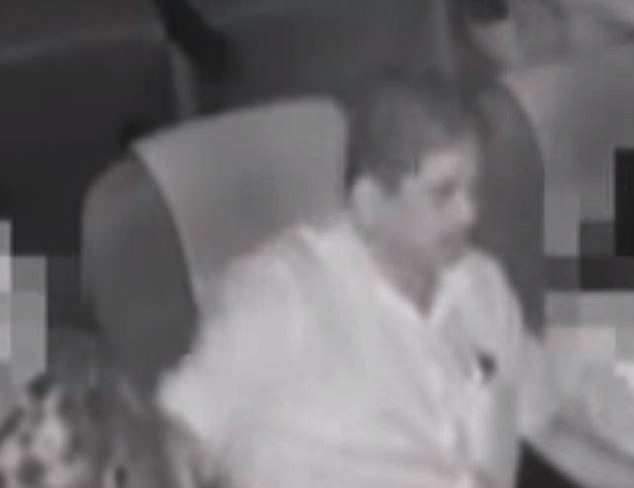 Every second of the vile abuse was captured by a CCTV camera, which caught 60-year-old KV Moitheenkutty (shown sat between the mother and daughter) engaging in sexual acts with both the child and her mother

Police were handed the footage on April 26 by Childline, the charity said, who were given the tape by the theatre’s owner.

The police, however, did not detain the man until a TV channel aired clips of the assault, according to ManoramaOnline.

The failure to act sooner has caused outrage in Edappal, which is in the Malappuram area of Kerala in India’s south.

According to The Hindu, Moitheenkutty has already admitted guilt.

The businessman reportedly owns jewellery shops in Thrissur – another city in Kerala – and in the Middle East.

The victim’s mother is said to have two older daughters and police suspect the youngest may have been abused in the past.

A rescue home has taken in the 10-year-old girl, while her mother has been questioned by police.

According to Gulf News, the sub-inspector of police in the region – KJ Baby – has been suspended from service for his failure to act sooner.

Police are also reportedly considering taking legal action against the mother for her complicity in the abuse.

Moitheenkutty has been charged with the use of criminal force with the intent to outrage a woman’s modesty as well as sexual assault.

A member of Childline told the News Minute that they informed police ‘the very next day’ after being given the footage.

The man, known only as Anwar, went on: ‘We delayed it by a day to thoroughly check the visuals, considering the severity of the case. It’s a three-hour video, the theatre guys found it.

‘We had checked the entire footage. He was abusing the mother and child at the same time, that too continuously from the beginning to the end.

‘During the movie interval, he stops, goes out and then comes back to resume the sexual assault. After informing the police, we approached them every day to follow up.

‘We waited till Saturday as we thought that the police should be given time to trace him. Still they didn’t act.’

Meanwhile, an anonymous source told the outlet: ‘[Moitheenkutty’s] influence as a rich businessman might have prompted the police not to take [the] case against him.’