A little girl’s hair was dyed green by a Primark bobble she was wearing while splashing around in a paddling pool.

Despite four-year-old Celyn Jones’ hair having been washed every day since the incident on Monday, the colour still remains.

And stranger still, the bobble was not even green, but dark-coloured. 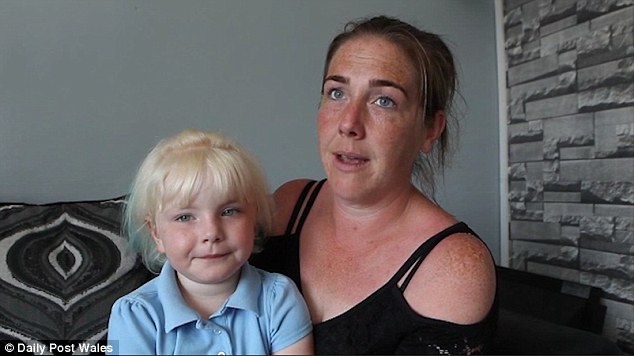 Lowri Jones, pictured with her daughter Celyn, left, bought the young girl a bobble to keep her hair tied up when she splashed around in the swimming pool 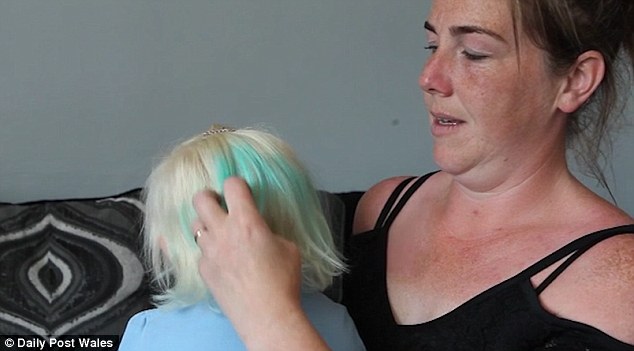 However, the £1 bobble from Primark bled its dye changing Celyn’s hair colour 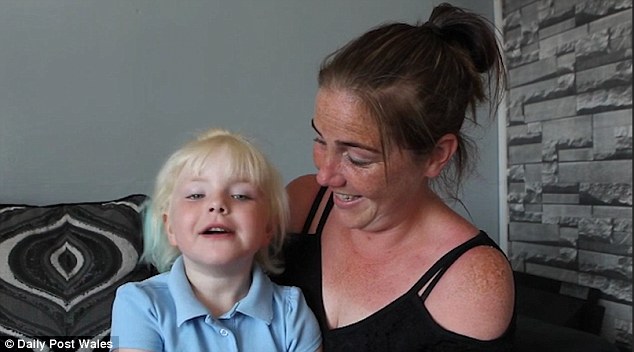 Now her parents Stephen and Lowri Jones from Llangefni are warning others about using the £1 hair ties from the discount fashion store, which is now investigating.

They are worried that another child could swallow the dye.

The couple say they have tried everything to remove the dye and although the colour is fading, it is still visible in Celyn’s bright blonde hair some five days later.

Lowri said: ‘On Monday, I put Celyn’s swimming costume on her after smothering her in sun cream.

‘I tied her hair up with one of the bobbles we’d bought from Primark to keep her hair out of her face.

‘Around 20 minutes later, I started to notice her hair was turning green. 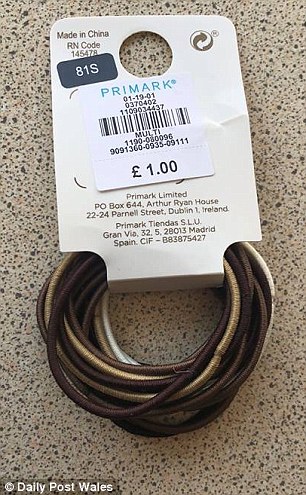 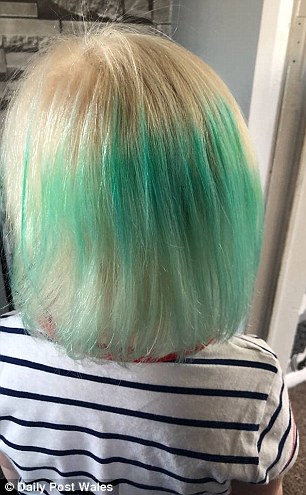 ‘I took the bobble out and the green dye just spread throughout her hair.

‘I didn’t think much about it at first, thinking the water in the paddling pool would wash it out, but it didn’t.’

The mum-of-five said she has since tried all different kinds of shampoos and has even used Fairy Liquid on her daughter’s hair.

Her 33-year-old mother added: ‘Celyn’s hair is very light so you can see there’sstill quite a lot of green in it.

‘Her hair does look a mess and she’s having to go to school with it like that.

‘I’ve explained to the teachers but Celyn is loving it.’ Celyn’s father Stephen said he had emailed Primark to complain.

He said: ‘We can’t even take Celyn to the hairdressers to have the green

cut out because it’s all around the middle of her head.

‘It’s quite embarrassing. It’s just a mess and doesn’t look good on us as parents either.

knows what kind of damage that would have caused?

‘I want to know what Primark is doing about it as I wouldn’t like it to happen to another child.’

A Primark spokeswoman said: ‘The quality of our products is extremely important to us.

‘I can confirm that an email has been received and Primark will investigate this complaint.’

An email sent to Stephen from Primark in response to his complaint asks him to post the bobbles to their officers to be tested by their technical department.