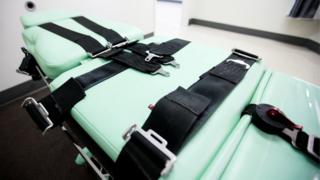 Annual executions recorded worldwide fell by almost a third in 2018 to the lowest figure in more than a decade, Amnesty International says.

Executions in Iran fell by 50% after capital punishment was abolished for some drug offences, Amnesty found.

Amnesty says thousands were probably killed in China but records are secret.

That would make it by far the leading executioner.

The next four nations are Iran, Saudi Arabia, Vietnam and Iraq. They account for about 77% of the 690.

What does Amnesty’s report say?

Amnesty’s review of the use of the death penalty, which was released on Wednesday, says that while the number of executions have fallen in some countries, several others have seen a rise, including the US, Japan, Singapore, South Sudan and Belarus.

“The dramatic global fall in executions proves that even the most unlikely countries are starting to change their ways and realise the death penalty is not the answer,” Amnesty’s secretary general, Kumi Naidoo, said.

“This is a hopeful indication that it’s only a matter of time before this cruel punishment is consigned to history, where it belongs.”

Iran, which executes hundreds of people every year, mostly for drug offences, softened its drug crime laws in 2018. The move, which was applied retroactively, affected some 5,000 prisoners awaiting execution.

At the end of last year, a total of 106 countries had abolished the death penalty for all crimes.

The countries that saw significant falls in reported executions between 2017 and 2018 are:

Have any countries reinstated the death penalty?

Yes. Last year Thailand carried out its first execution since 2009, Amnesty found, while earlier this year Sri Lanka began a search for executioners as part of a crackdown on drug smuggling.

Capital punishment is legal in Sri Lanka, where nearly 1,300 people are currently on death row, but no executions have taken place in the country since 1976.

“These countries now form a dwindling minority,” Mr Naidoo said, adding: “To all the countries that still resort to the death penalty, I challenge you to act boldly and put a stop to this abhorrent punishment now.”