Paris:  More than 18,000 people marched in Paris as part of an international mobilisation to show popular support for urgent measures to combat climate change in advance of a San Francisco summit. 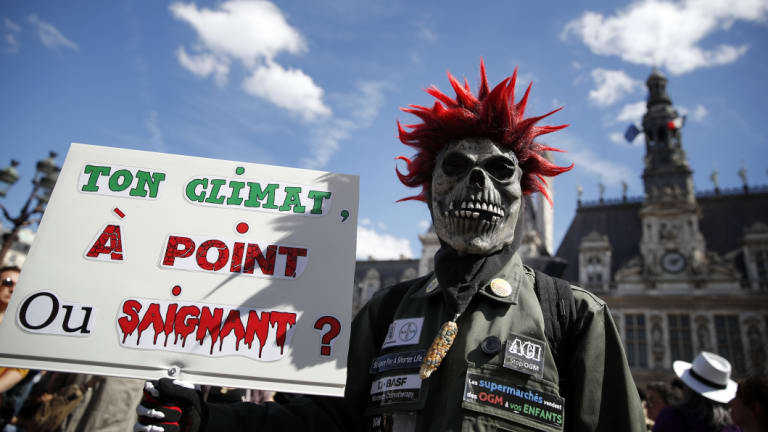 A man holds a poster reading: Your climate. Well done or rare? during a protest, in Paris, on Saturday.

Crowds overflowed a plaza in front of City Hall on Saturday before marching east to the Place de la Republique, carrying an urgent message that it's up to the public to put global warming at the top of the political agenda.

"Planet in Danger," read some banners.

Activists around the world encouraged "Rise for Climate" protests before the summit taking place September 12-14. California's governor proposed the event after President Donald Trump vowed to pull the US out of a landmark 2015 climate accord.

The international agreement was negotiated in France, and the French capital's march was more successful than ones held on Saturday in other French cities or elsewhere in Europe.

Environmental groups said they had organised hundreds of events around the globe to highlight the issue. 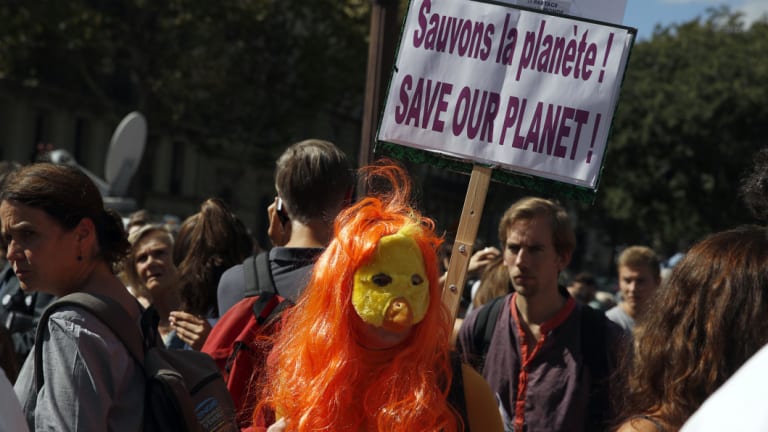 A man holds a poster reading: Save our planet, during a protest in Paris on Saturday.

Thousands of people took to the streets of San Francisco, marching about 3 kilometres from the city's piers to City Hall. Demonstrators banged drums, sang and hoisted signs that said "Rise for climate justice" and "Not a penny more for dirty energy." They called for politicians to spearhead a transition to 100 per cent renewable energy.

Police estimated that 18,500 took part in the Paris march, while organisers put the number at some 50,000.

Several hundred people gathered in France's southern port city of Marseille. Several dozen called for an end to the use of fossil fuels outside London's Tate Modern art gallery. Only about two dozen showed up in Barcelona, Spain.

The front-page of France's daily Liberation newspaper featured a call from 700 French scientists for the government to "move from incantations to acts to move toward a carbon-free society".

The language was a reference to French President Emmanuel Macron's use of the phrase "Make our planet great again," a takeoff on Trump's "Make America Great Again" campaign slogan.

The signing scientists also called for "strong and clear political choices" and said "solutions are available".

The march in Paris, organised with the theme "Change the system, but don't change the climate," was both festive and serious.

One protester, Manuel Bibes, denounced the plastic that inundates daily life. Another, Rodgrigo de la Vega criticised the practice of driving down the road to buy bread.