The world’s population grew by 74 million to 7.8billion during 2021

The world’s population increased by 74million people to a total of 7.8billion this year, according to the US census bureau.

China remains the world’s most-populous country with 1.4billion people, though it is only narrowly ahead of India on 1.38billion which is set to overtake it by 2025.

The US is third with 332million, followed by Indonesia on 275million and Pakistan on 238million.

Figures for 2021 mean the global rate of growth is 0.9 per cent, lower than the 0.96 per cent forecast and coming against the backdrop of the Covid pandemic. 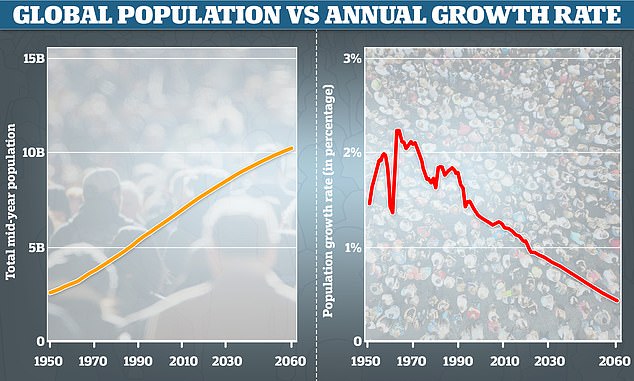 The world’s population grew by 78million to 7.8billion in 2021, in line with projections (left) – but the rate of growth fell to 0.9 per cent meaning it has been falling since the 1960s (right) 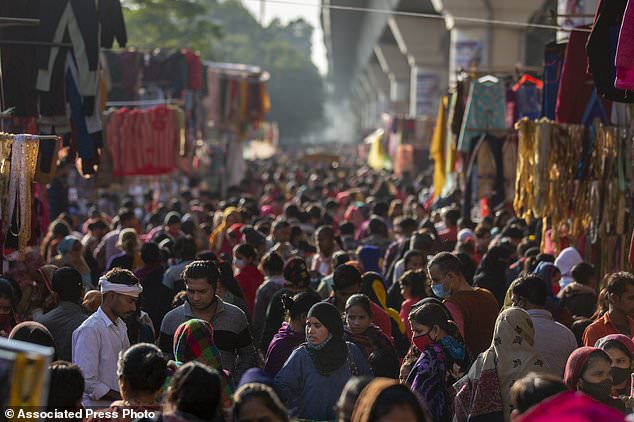 India was the world’s second-most populous country in 2021, according to US census bureau data, and is set to overtake China as the most-populous by 2025

While the global populations are still rising overall, the rate of increase has been falling more-or-less consistently since the mid-1960s when it peaked around 2 per cent – with global population set to peak before 2100 after which it will decline.

Half of the world’s population already live in countries where lifetime fertility – the number of children a woman is expected to give birth to on average in her lifetime – has fallen below 2, meaning the population will decline overall.

According to UN data, the global population will continue to grow until 2100 but growth will be concentrated in fewer and fewer places.

More than half of population growth in the next three decades is expected to be concentrated in just eight countries: the Democratic Republic of the Congo, Egypt, Ethiopia, India, Indonesia, Nigeria, Pakistan, Tanzania, and the United States.

Meanwhile 55 countries are expected to see their population fall by one per cent or more over the same period.

The most-dramatic falls, according to UN data, will come in Bulgaria, Latvia, Lithuania, and Ukraine – where populations are expected to fall by 20 per cent.

Those trends will be driven by falling fertility rates along with net emigration, the UN predicts.

The global tipping point at which the world’s population of over-65s will outnumber the total number of young people aged 15 to 24, the UN says.

After 2100, if projections hold true, then the global population will enter the first period of sustained decline in recorded history.

But other studies have been less optimistic. One recent study published by The Lancet estimated the peak will actually come in 2064 – almost four decades earlier.

Global populations will reach 9.7billion that year, the Lancet study suggested, before falling to around 8.8billion by 2100.

It means that, far from the overcrowded future imagined by sci-fi novels and films, humanity could actually be headed for a future where abandoned buildings, towns and even cities are the norm because their population will die out.

The Lancet study predicted the hardest-hit nations will be Japan and Italy, both of which could see their populations more-than halved before 2100.

Spain, Portugal, Thailand and South Korea are also expected to see a reduction of around 50 per cent.

Even China, known for its rapidly expanding population in the 20th century, could see its population almost-halve by the end of the 21st.