One of the Government’s top scientific advisory panels found out Covid had spread to another country from China during a crunch meeting to discuss the virus’ threat to Britain, official documents reveal.

Public Health England (PHE) members present at an hour-long NERVTAG discussion on January 13 were notified of a case in Thailand – which was the first time the then-unnamed disease had been diagnosed outside of China.

The infected woman, 61, was spotted through thermal screening at a Bangkok airport after she travelled with family members from Wuhan – the Chinese city at the heart of the pandemic.

NERVTAG advisers questioned how she caught the coronavirus because she had not visited a seafood market that was originally considered Covid’s ground zero, raising the prospect the disease was spreading between humans.

But the group of virologists and epidemiologists from Britain’s top universities, who feed directly into SAGE, insisted there was little evidence to say it was being passed from person to person and decided the risk to the public was still ‘very low’.

Minutes of the group’s first meeting on Covid-19 revealed the group was ‘fully aware’ the case in Thailand was detected by a thermal image scan. But they concluded that port of entry screening was ‘not advised’. 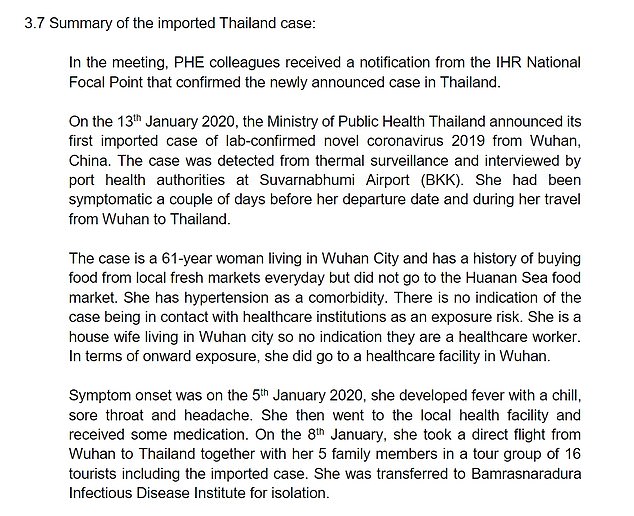 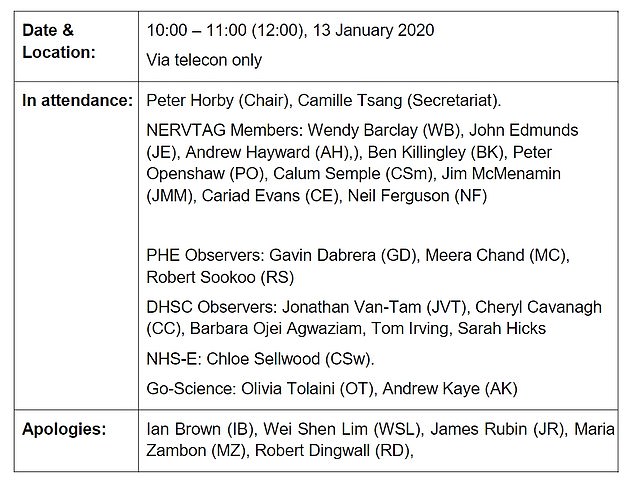 NERVTAG agreed to meet up again in ‘around two weeks’ time’. Department of Health observers who were present were told to simply sort out putting up ‘advice posters’ in airports for travellers with tell-tale symptoms

NERVTAG agreed to meet up again in ‘around two weeks’ time’. Department of Health observers who were present were told to simply sort out putting up ‘advice posters’ in airports for travellers with tell-tale symptoms.

But the group actually met again after just eight days. PHE representatives warned that the situation was ‘rapidly changing’ and scientists agreed there was now ‘clear evidence’ of human-to-human transmission. 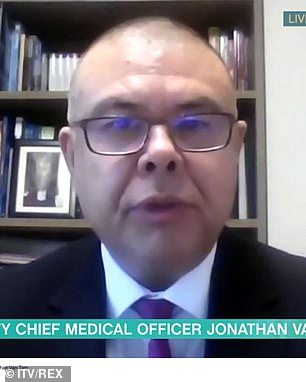 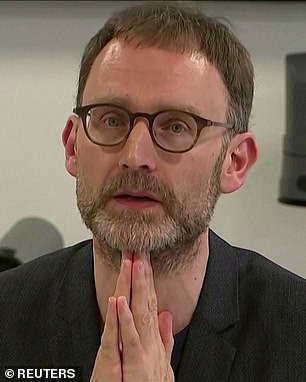 Only 283 cases of Covid had been diagnosed across the world at the time, including four outside of China and 21 in provinces other than the hot-bed of Hubei – which Wuhan is the capital of. Another 15 cases, including one in Taiwan, were still being investigated.

Government scientists are already fretting about a potential public inquiry into the evidence ministers were given to shape Britain’s bungling response to the Covid-19 pandemic.

Department of Health officials in September – before the UK’s second wave had even kicked in – were working out how they could support members of NERVTAG if No10 called for an official probe.

Minutes of a meeting of the advisory panel, which feeds directly into SAGE, say: ‘There will likely be scrutiny of NERVTAG’s deliberations as they have offered critical pieces of advice.’

Professor Peter Horby, an infectious disease expert at Oxford University who chairs the panel of top scientists, revealed he would circulate a document on ‘records management’ in preparation for an inquiry.

MailOnline yesterday revealed that NERVTAG found out Covid had spread from China to Thailand during a crunch meeting in January – but still insisted the risk of the disease to the UK public was ‘very low’.

Official figures show at least 50,000 Britons have since died, with ministers blamed for being too slow to implement the first lockdown in March and letting the cruel disease run rampant through care homes.

Pressure is mounting on Boris Johnson to commit to a public inquiry into the Government’s handling of the coronavirus pandemic, with grieving families accusing No10 of ‘flawed decision-making’.

NERVTAG recommended upgrading the threat to the public from ‘very low’ to ‘low’ but dismissed bolstering it further because the UK had still yet to record a confirmed case.

It wasn’t until January 29 that Britain recorded its first confirmed Covid case when a University of York student and their parent – who had flown in from China – tested positive after being escorted out of a hotel in the city centre by medics in hazmat suits.

At the second meeting, NERVTAG – chaired by Oxford University infectious disease specialist Professor Peter Horby – discussed how four out of the five cases spotted outside of China were ‘detected by border screening’.

But Professor Andrew Hayward, an epidemiologist at University College London, said it was not proof that port health screening – such as using thermal scanners to look for fevers in travellers – could identify the majority of cases. He said other cases may have been imported but not yet spotted.

In light of the ever-changing outbreak and other governments adopting port of entry screening, Department of Health chiefs asked the group to reconsider the evidence on screening travellers for Covid.

But the panel stood firm and said: ‘Providing information to travellers and providing effective means for screening febrile travellers attending healthcare settings was likely to be a better option.’

Professor Ferguson, who was one of the experts behind the terrifying Imperial College London projections that spooked No10 into Britain’s first lockdown in March, claimed that modelling suggested the benefit would be ‘low’.

He said it would only detect travellers who were not sick before boarding a flight but became ill during the journey. This is because it can take patients several days before they show any signs of being ill.

Minutes from the second meeting on January 21 also show that ‘NERVTAG felt there was a lack of clarity on the exit screening process in Wuhan’.

But the group assumed China was stopping travellers with a fever from departing the nation because of statements released by local authorities. And they said it would have little effect – even if Beijing’s bureaucrats weren’t doing it.

Dr James Rubin, a psychologist at King’s College London, also warned that screening could lead to ‘stigma’ for travellers.

Documents say: ‘It was noted that port of entry screening in the UK would be a significant undertaking, especially as fever may not be a very sensitive method of identifying cases.’

Fever wasn’t mooted as a symptom until January 30 – the day after the first two coronavirus patients were diagnosed on British soil. Members ‘largely agreed’ it was a sign of the disease.

NERVTAG also said that direct flights out of Wuhan would not be the only way to travel out of the affected area and that the outbreak zone ‘appears to be expanding’.

At the third meeting on January 28, the experts discussed widening the ‘case definition’ of a Covid patient – a set of criteria to classify whether someone really has Covid.

Department of Health bosses warned keeping it just to patients who had been to Wuhan – which had already banned all flights and trains from leaving the city – was inconsistent with the reality of the ‘changing geographical spread of the virus’.

Data at the time revealed there were at least 30 provinces in China with confirmed cases of WN-CoV – the place-holder name for the coronavirus before it was eventually given a title in early February.

NERVTAG said ‘expanding the case definition to the whole of mainland China at this moment in time was not feasible and did not seem appropriate with the information at hand’.

But they agreed it should include the whole of Hubei – which is home to around 60million people – and a wider number of provinces. The list of affected areas should be kept under review, NERVTAG also said.

Just two days later at the fourth meeting, the group U-turned on their advice and accepted it was ‘necessary’ to include all of mainland China on the case definition list.

Minutes from the meeting say: ‘Following a short discussion, NERVTAG agreed with DHSC on expansion of the geographical element of the case definition to include the whole of mainland China.’

Professor Chris Whitty also said that ‘feedback’ and the ‘evolving nature’ of the crisis meant that it would be better to slap the whole country on the list, instead of just a handful of provinces.

Professor Van-Tam also argued that any Britons with tell-tale symptoms of Covid who were seeking to be repatriated from China should not be allowed to board an organised flight back to the UK.

During the same meeting, NERVTAG said there was ‘no evidence’ to support that wearing face masks cuts the risk of spreading the virus.