GPs say they are dealing with a ‘tsunami’ of patients returning to appointments as the Covid crisis fades out in England.

More than 28million people booked GP practice appointments in March making it one of the busiest months ever, the BBC reported.

The figure was five million more than in February – a sudden spike of 20 per cent.

And doctors say they no longer see highs and lows in patient flows throughout the year, and that instead it is like they’re constantly in crisis.

Dr Dean Eggitt, a GP in Doncaster in South Yorkshire, told the broadcaster: ‘The ability to catch up has gone. That was before Covid. Then Covid hit and then it’s just peak, peak, peak, peak all the time.’

During the height of the coronavirus pandemic people avoided the NHS – having been advised to except in emergencies during the first wave – and officials fear that many have developed serious illnesses like cancers and not been checked.

The number of people dying at home surged to above average levels while non-Covid hospital deaths were less common, suggesting people were missing out on  end-of-life medical care.

A&E visits plummeted while the virus was circulating but they have surged again recently with the ‘worried well’ returning to hospital emergency departments. 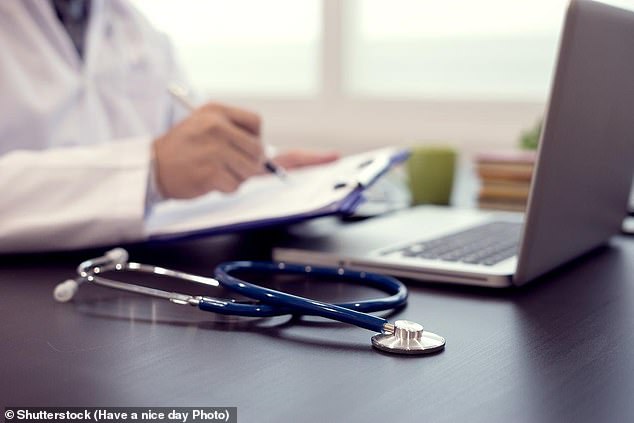 GPs were seeing their patient workloads rising even before the Covid pandemic, they say, and now there are people booking appointments who should have been treated months ago but avoided it because of the pandemic (stock image)

Dr Eggitt told the BBC: ‘We have almost a tsunami of patients coming to us. It feels like the river has flooded the banks.

A Health Foundation analysis of NHS data found that there were around 31million fewer GP practice appointments between April 2020 and March 2021 than in the previous year – 279m compared to 310m.

This was likely not a result of fewer people being ill but of fewer visiting their family doctor, meaning millions may have gone without care they usually would have had.

As a result, the patients now turning up to appointments are sicker than they would have been if they had seen a doctor six months ago.

This creates more work for the NHS and means people suffer more and, in the case of diseases like cancer or heart disease, makes them less likely to survive.

GPs have been warning for years that they don’t have enough staff to cope with rising patients, which was already a problem before the pandemic.

People living for longer after living increasingly unhealthy lifestyles – eating more junk food and exercising less – means many in middle and old age have long-term illnesses such as type 2 diabetes or high blood pressure which need regular treatment for years or decades.

The King’s Fund NHS think-tank estimates the health service is short of around 2,500 full-time GPs and warns this could surge to 7,000 as more retire in the coming years.

Chairman of the Royal College of GPs, Professor Martin Marshall, said: ‘General practice was already facing intense workforce and workload pressures – the pandemic has only exacerbated these.

‘We urgently need more GPs and other members of the practice team.’

Medics have also warned that the ‘worried well’ are returning to A&E departments and increasing the pressure emergency doctors face.

‘Interestingly, in the Covid-19 areas where there are high levels of the variant that originated in India, there are people who are worried about whether they’ve got Covid-19 so they’re coming into hospital.’