Grand National jump jockey, 21, who panicked and sped off in his Audi A4 at 114mph when police stopped him for a breath test as he drove home over the limit after night out is jailed for ten months 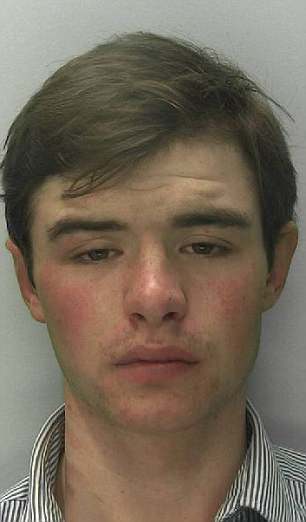 Charlie Deutsch, 21, has been jailed for 10 months after driving at 114mph away from police

A jump jockey who rode in this year’s Grand National has been jailed after a court heard that he panicked and drove off at high speed when police stopped him for a breath test.

Charlie Deutsch, 21, who has ridden 88 winners over the jumps, reached speeds of up to 114mph in his Audi car after escaping from police custody at the roadside and trying to shake them off, Gloucester crown court heard.

Deutsch was driving other jockeys home in Cheltenham, Glocestershire, after a night out to celebrate the retirement of a colleague at the Venetia Williams stables, the court was told.

Deutsch, from Tewkesbury,  Gloucestershire pleaded guilty to dangerous driving whilst over the drink drive limit and escaping from police custody on March this year.

He was jailed for ten months and banned from driving for 17 months.

His breath test reading was 49mcgs in 100mls of breath, well over the legal limit of 35mcgs.

His lawyer, Charles Royle, urged the court not to pass an immediate jail sentence because it could ruin Deutsch’s career.

He described Deutsch as a ‘professional jockey of exceptionally good character.’ He handed the court references from Venetia Williams and fellow top trainer Nigel Twiston-Davies.

Mr Royle conceded however that the ‘promising young sportsman’ could not have ‘made the matter any worse for himself’ than he did by attempting to escape.

Prosecutor Janine Wood said it was at 1.30am on March 30 that Police Sergeant Marcus Forbes-George spotted Deutsch driving too fast in Cheltenham.

He intended only to warn the driver about his speed but when he pulled alongside him it became apparent the jockey was intoxicated.

Sgt Forbes-George then arrested Deutsch, who said ‘Please don’t, this will ruin me. I’m a jockey. I have to drive 50,000 miles a year.’

Mrs Wood described Deutsch as becoming ‘increasingly agitated’ and said he then ran back to his vehicle.

He started the car as Sgt Forbes-George broke the driver’s window with his baton in a bid to remove the ignition key.

He failed and Deutsch drove off with three passengers in his vehicle. 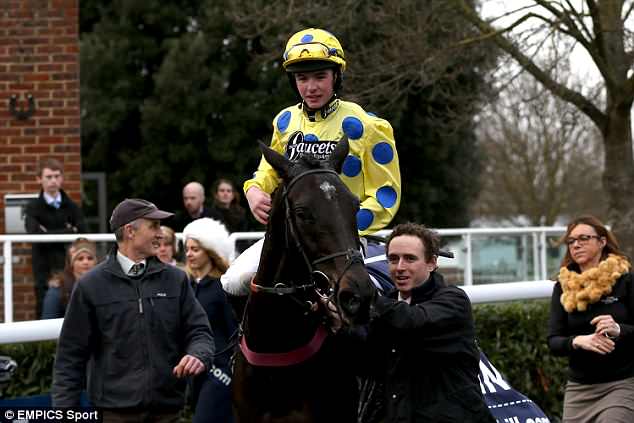 ‘The other occupants were shouting at him to stop,’ Mrs Wood said.

As Deutsch drove away he trapped the officer’s arm in the window causing him pain.

The struggle also caused the officer to drop his radio which fell into the footwell of Deutsch’s car.

Traffic officers homed in on the signal from the radio police and saw the Audi A4 pass them with no headlights in Bishops Cleeve.

Deutsch then led police on a 4.81 mile chase and did not stop despite sirens and blue lights.

The chase ended after a stinger was deployed, but not before Deutsch reached speeds of 100mph in 50mph zones, drove on the wrong side of the carriageway and went the wrong way round a roundabout.

Mrs Wood said speeds in the pursuit were estimated to be 114mph at one stage.

When his Audi came to rest on grass verge, Deutsch was again arrested, and continued to resist the officers, Mrs Wood said.

Deutsch had no previous convictions, she added. 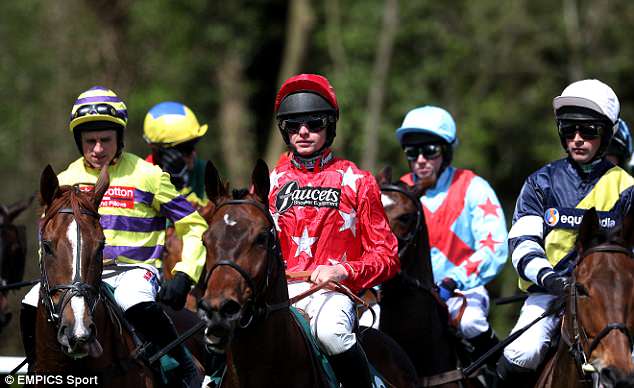 The judge, Recorder James Watson QC was told by probation officer Joanne Hall ‘It is very clear he is remorseful. He apologises and regrets his actions.

‘He was out with other jockeys in 21 Club in Cheltenham. He was the designated driver, but had a couple of drinks of Prosecco and cider.’

The court heard that Deutsch had announced they would get a taxi back, but instead drove as he ‘didn’t realise he was drunk.’

He also said he was unaware he was speeding, and he panicked when the police stopped him.

‘His only thought was his job,’ Ms Hall said. ‘His job is his dream, which he absolutely loves. He decided to get out of the situation.’

Mr Royle said: ‘He is a very sensible and promising young man who has done something remarkably stupid.

‘He made it immeasurably worse by his actions. He is remarkably well liked.

‘He has a good reputation and following in the industry.’

On that night Deutsch had been to the retirement party of Venetia Williams’s previous head jockey, he said.

The other occupants of Deutsch’s car were also jockeys and once the police became involved, Deutsch panicked and feared he would lose his job, he added.

Mr Royle said Deutsch rode in this year’s Grand National, and was unseated at Becher’s Brook.

‘A tent was erected around him,’ Mr Royle said, ‘and he was taken off on a spinal board, but he walked away.’ 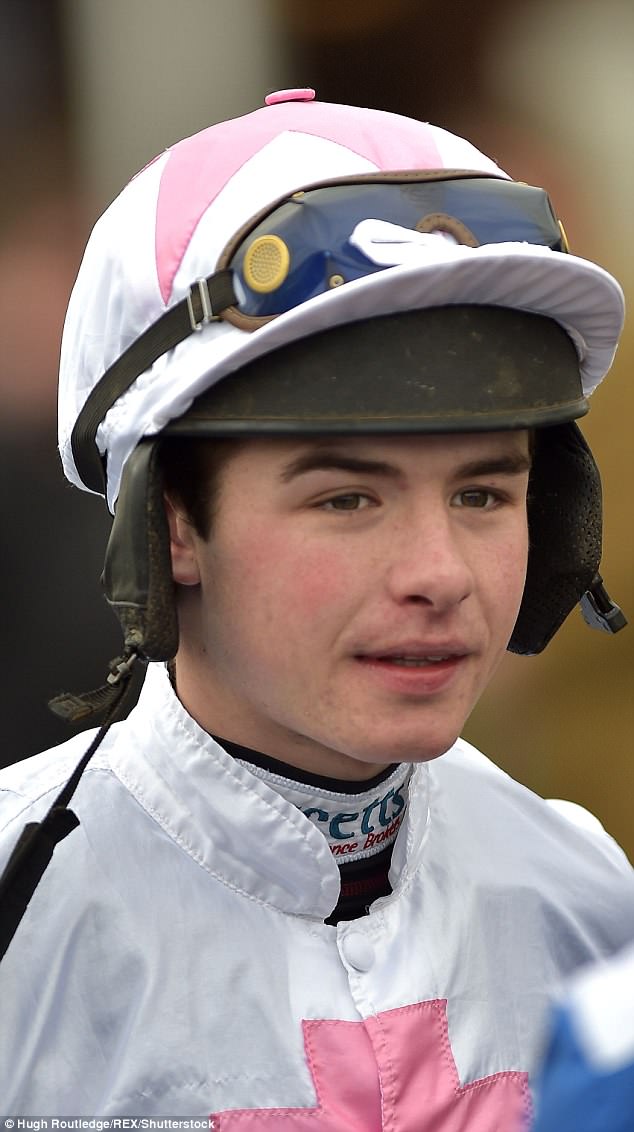 Mr Royle said it was not clear if Deutsch would be allowed to continue as a jockey if he was given a jail sentence.

He described driving away from Sgt Forbes-George as ‘an impulsive attempt at liberty that was unsuccessful.’

‘This was an opportunistic escape born out of panic,’ the barrister concluded. ‘He has brought great shame on himself and his family.’

Recorder Watson QC told Deutsch ‘You set off on a course that amounted to a violent escape.’

The judge said that Deutsch ‘shut his ears and mind’ to the pleas from his passengers to stop.

‘Your conduct was deliberate. You were stopped and brought back in to custody only because a stinger was deployed.

‘Your control of the car seems tenuous in the sense of safety, and was highly dangerous to anyone else on the road.

‘What you have brought on yourself will have a lasting impact, and I accept to a degree that what you did was born out of panic.

‘But your conduct was outrageous,’ the judge said.

‘To run back to your car, violently resist the officers in a deliberate decision to break out of the situation come what may.

‘Those who resist arrest, involving violent struggles and cause injury to police officers must not expect a custodial sentence to be suspended.

‘It is with a heavy heart and reluctance, but it is too serious to merit suspending the sentence,’ the judge concluded.

Alongside the 10 month jail sentence, Deutsch was disqualified from driving for 17 months and ordered to take an extended retest.

He was also ordered to pay £250 in compensation to Sgt Forbes-George and £140 in court surcharges.