Giving grandparents an automatic right to see their grandchildren may have damaging results for some young children, ministers have warned.

They say changes to ease the agony of grandparents frozen out after a family break-up could have ‘unintended consequences’.

In particular, ministers are anxious to avoid any new law that would allow grandparents to use children as weapons on the side of one parent in a difficult divorce.

The warnings about any new ‘grandparents law’ follows pressure from MPs to amend the Children Act 1989, with ministers promising to ‘look at’ changes that would prioritise grandparents’ rights in the courts.

Groups representing grandparents want to see automatic access to grandchildren after children’s parents split, and an end to legal safeguards that they believe unfairly restrict the rights of grandparents. Similiar rights are also being sought for aunts and uncles.

However, children’s minister Nadhim Zahawi said yesterday that the Government would be guided by the principle that the wellbeing of the child comes first, adding that ‘if it is in the child’s interest, as it may be, to see their grandparents, then that is what should happen’.

A statement from the Ministry of Justice said: ‘The welfare of a child is the primary consideration for the family courts and steps are taken wherever possible to reduce the impact of family conflict on children when relationships end.’

Hopes among grandparents’ pressure groups and their supporters have grown following a Westminster debate last week in which MPs spoke of the pain of grandparents separated from their grandchildren. 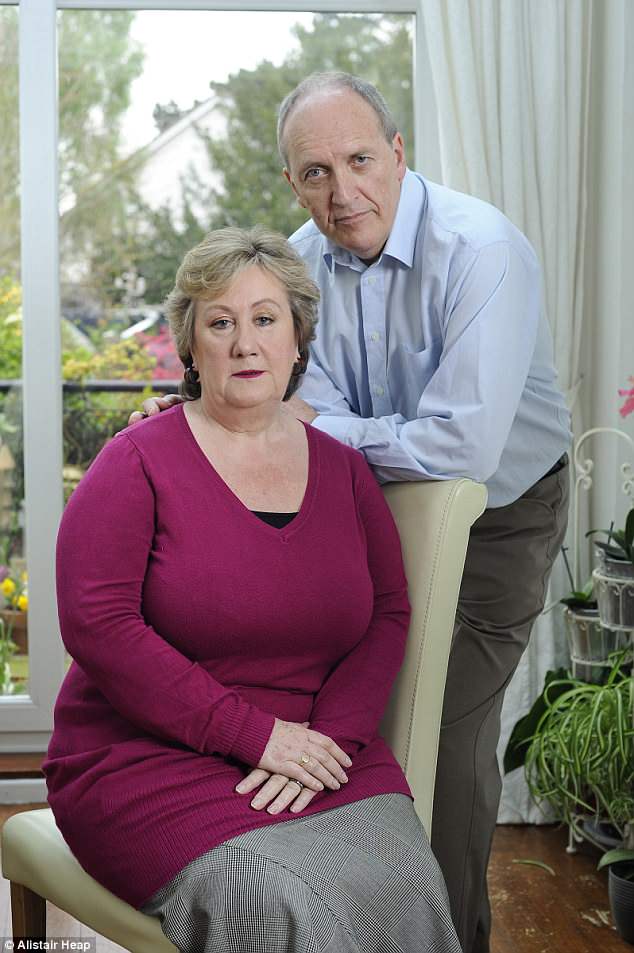 They were four simple words, but to Jane Jackson they were heart-stopping: ‘I love you, grandma.’

They were words Jane hadn’t heard for 11 years and, she told me, thought she would never hear again.

Words she dreamed of and hoped for, every day and every minute of every day, but never really believed her beloved granddaughter would be able to say to her. Until Sunday when, for the first time in more than a decade, they met.

She said the now 17-year-old young woman was shaking like a leaf. They spent the afternoon together, and Jane told me: ‘Just seeing her sitting on my sofa – actually sitting there – was unbelievable, magic.’ Then her granddaughter gave her that message of love.

Listening to the quiet joy in Jane’s voice as she described her magical afternoon, I found tears filling my own eyes.

As with many grandparents, the cause of the family split was a divorce. Her son and his wife had broken up, and she’d lost contact with her granddaughter.

They were forbidden from meeting, writing or speaking to each other, and there was absolutely nothing they could do about it.

She’d tried hard to stay calm, neutral, not to interfere and bide her time, but years of silence and stalemate were hard to endure.

For years Jane has kept one memory alive in her heart, of her granddaughter, aged seven, sitting in the back of her car: ‘I could see her, her blue eyes shining, a smile as broad as the Earth, as she waved goodbye.’

This enforced separation is a source of heartbreak for so many grandparents, and grandchildren, and something I have campaigned against for many years.

At the last count, in 2016, around 2,000 grandparents went to court to try to fight for the right to see their grandchildren – an expensive, frustrating and harrowing act borne of desperation. And without the rights of grandparents enshrined in law, often ultimately futile. And these were the lucky ones, who could afford to hire professional help.

That is why I was overjoyed this week to hear that these voices are finally being listened to. 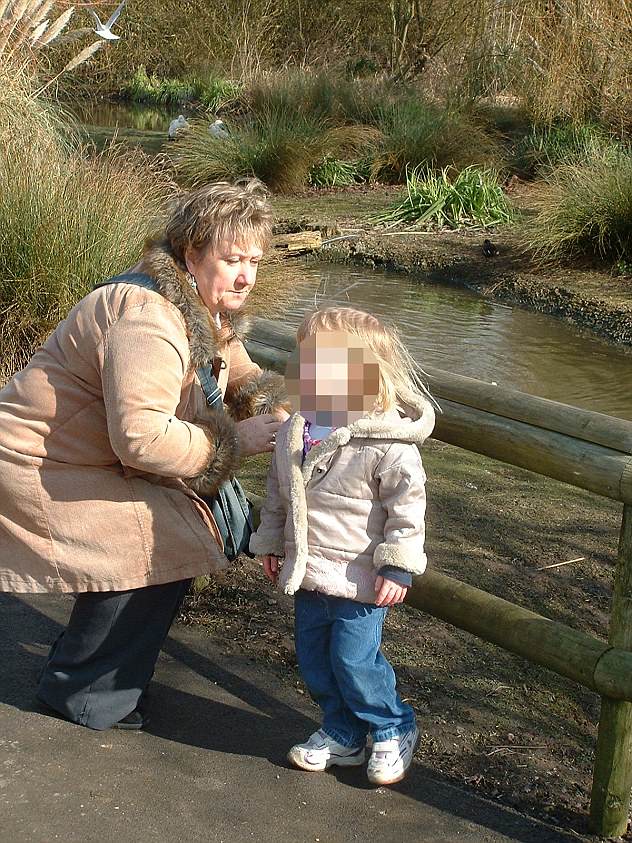 Parliament is to look at a change to the Children Act 1989, which could establish a ‘presumption’ that grandparents (and uncles and aunts) have a right to see their grandchildren, nieces and nephews, after the children’s parents break up.

Jane, 66, and her husband Marc founded the Bristol Grandparents Support Group – of which I am patron – offering support to others in the same, sad situation. ‘I preach to the others that they should never give up hope. But the truth is I gave up hope years ago,’ she admits. ‘So if it can happen for us, it can happen for anyone.’

I am yet to hear Jane’s full story, of how she finally broke through to her granddaughter, but having spent a glorious Bank Holiday weekend with two of my grandsons, I know how precious this contact is. If anyone told me I could never see my grandchildren again, I would feel as if my heart had been plucked out of my chest. We have such fun together. I may be far too lenient, I may spoil them terribly, but that’s my role as a grandparent.

I remember the same warm, easy love from my own grandmother. When as a teenager I ran away from home after a stupid row with my mother, I rang Granny and told her I was going to spend the night with her.

She made a slap-up tea for me and sent me home the next morning. Years later, when she needed eye surgery, I stayed with her to put the drops into her eyes. I treasure the little crystal bow brooch she left me in her will. I named my oldest daughter, Emily, after her. Her love of children inspired me – I still remember how they clustered around her. And what angers and distresses me is the knowledge that thousands of today’s children have been cut off from what should be the heart and soul of a family: the grandparents. That is why I see this proposed change in the law as not so much a victory for grandparents, but for grandchildren.

Of course, circumstances do exist where it is in the child’s best interests not to be in contact with a grandparent, but to deny them this precious relationship needlessly feels pointlessly cruel and almost sadistic.

Both grandparents and grandchildren have written to me in their hundreds. They’ve tearfully told me of Christmas cards and birthday presents returned, of grandparents being warned by the police that they were ‘stalking’ by trying to send letters and gifts. One grandmother said: ‘The police arrived, read the riot act to me and left me sobbing behind a closed door.’

Jane knows of several grandparents who actually took their own lives. Many grandparents have described their loss as ‘a living bereavement’, knowing that their grandchildren are alive but prevented from even sending them a simple loving message.

Why does this terrible split in a family happen? Often, but not always, it’s due to a bitter divorce or separation. Sometimes it even happens when one partner dies, a time when the whole family needs to comfort and support each other. And yet a grandmother told me that when her daughter died of breast cancer, ‘as soon as she passed away her husband pushed us out of the children’s lives. When my daughter died it was a double loss – you have the loss of your daughter to deal with and the loss of no contact with your grandchildren. We have no rights. No power. No voice.’

This proposed change in the law could see an end to that. Jane, who for many years worked as a teaching assistant for children with special needs, says there is still a long way to go.

She told me: ‘Meeting my granddaughter is not the end of the story, it’s just the beginning. We must keep up the pressure on MPs to change the law.’ Recently I was able to introduce Jane to Nigel Huddleston MP, who held a debate last Wednesday, and MPs from every party joined the cause. Now Lucy Frazer, a minister in the Justice Department, has promised to look at this very simple change to the Children Act. 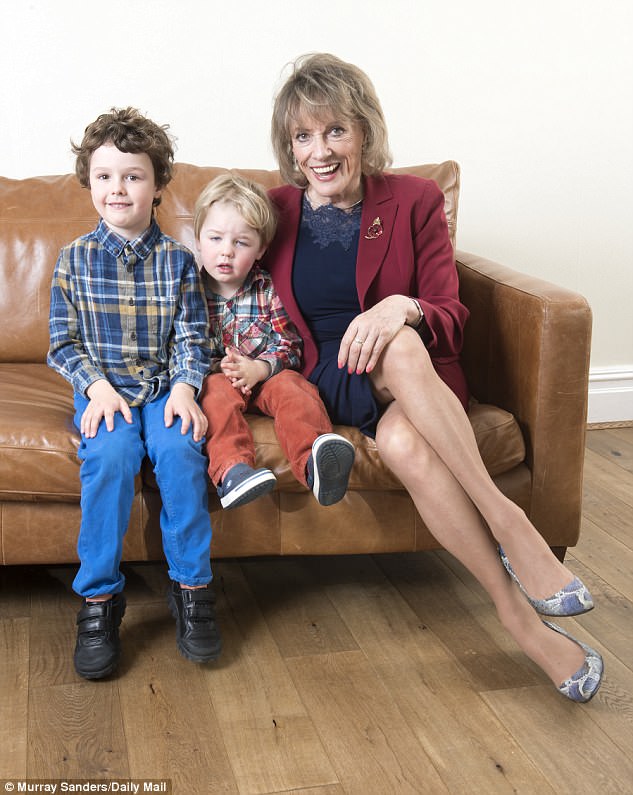 Dame Esther Rantzen is pictured with her grandchildren Alexander, two, and Benji, five

This is not a law to take sides in a divorce, or weaponise warring parents. This is a change in the law designed to protect and support children who need and long for that precious inter- generational relationship.

For some, alas, it is too late. Michael, aged 29, bitterly regrets the loss of his grandparents. He wrote to me: ‘My grandmother died when I was 12. We were not allowed to go to her funeral. My grandfather tried the legal route, and found he had no rights whatsoever.

‘My grandfather died when I was 16. Again we were not allowed to attend the funeral. I remember asking my mum if I could see him before he died. I was not allowed. I feel a sense of deep loss, guilt and regret. As a child you are powerless to insist that you see your grandparents, however much you may want to.’

French law gives children that power. But when British grandparents as a last resort do go to the courts to ask for access, all too often it costs thousands of pounds to no avail.

The simple addition to the Children Act which is proposed would not only change attitudes in our courts, but perhaps also in parents. No matter how bitter a separation is, surely the children should be given as much security as possible, and the continuity of a grandparent’s love can be healing when a child is in real pain.

As one grandson wrote to me: ‘The summers that I shared with my grandparents are the most memorable in my life. However, things changed when I was nine or ten. That’s when my parents’ relationship became a bit rocky. My grandmother still sends letters and occasionally we speak on the phone… I do miss them very much, and hope that some day I will be able to visit them again.’

So I do hope Miss Frazer recognizes this is not about grandparents’ rights, it is to protect and support grandchildren. Thousands who are suffering a ‘living bereavement’ need the support of the law.

And one day many others, like Jane Jackson, will be able to rejoice in that simple message that means so much: ‘Grandma, grandpa, I love you.’