WASHINGTON (AP) — New White House press secretary Karine Jean-Pierre was delivering her third on-camera goodbye to a departing staffer in less than 24 hours when she quipped to reporters, “I promise we will have a press shop.” She added, “Not everyone is leaving.”

It’s a dynamic playing out across the White House complex this month — and more evidence that not even the White House is immune from what has been called “the great resignation” as employers struggle to fill vacancies and workers jump to new jobs at record rates.

The administration is undergoing a period of unusually high staff turnover as President Joe Biden nears 18 months in office. Long hours, low morale and relatively low pay are taking a toll on both the ranks of the senior staff and the more numerous junior aides who keep the White House functioning.

It’s not unusual for staff to turn over at this point in a presidency, but the swiftness of the change has been stark at times: Two-thirds of the White House press shop, much of the COVID-19 response team, two of the deputy counsels to the president, even the staffer who manages the White House Twitter account are all leaving within a few weeks of each other.

Some of it is by design. As is customary, White House staff were told to leave by July or to wait to depart until after the November elections, according to current and former officials.

Still, the turnover, particularly within senior ranks, pales in comparison to the turbulent first year of President Donald Trump, who hired and dismissed staff at a record pace. Also, the Biden White House staffing was more stable than many predecessors in its earliest days, making the recent and upcoming exits more noticeable.

No critical roles are going unfilled

The full scale of the Biden turnover will not be clear until the end of the month, when the White House is required to submit its annual salary report to Congress.

Biden aides insist the departures are not tied to the president’s low poll numbers, but instead reflect a natural transition for staffers — some of whom also toiled long hours on the campaign — looking to improve their quality of life. The aides emphasized that replacements have been secured for most of the departing staff and that no critical roles are going unfilled.

“It’s a normal time for this level of turnover in any administration,” said White House spokesperson Emilie Simons. “Government service involves sacrifice, and staff often have young children or promising careers in the private sector they put on hold, or opportunities for advancement within the administration or through graduate school.”

Many of the departing aides are heading to federal agencies, which have far deeper pockets than the smaller Executive Office of the President. They can often double their salary and substantially reduce their workload.

In many ways the departures echo a broader trend in the economy — which the Biden White House has championed — where a historically tight labor market has given workers abnormal leverage to seek stronger-paying jobs that are more compatible with their post-pandemic lifestyles. 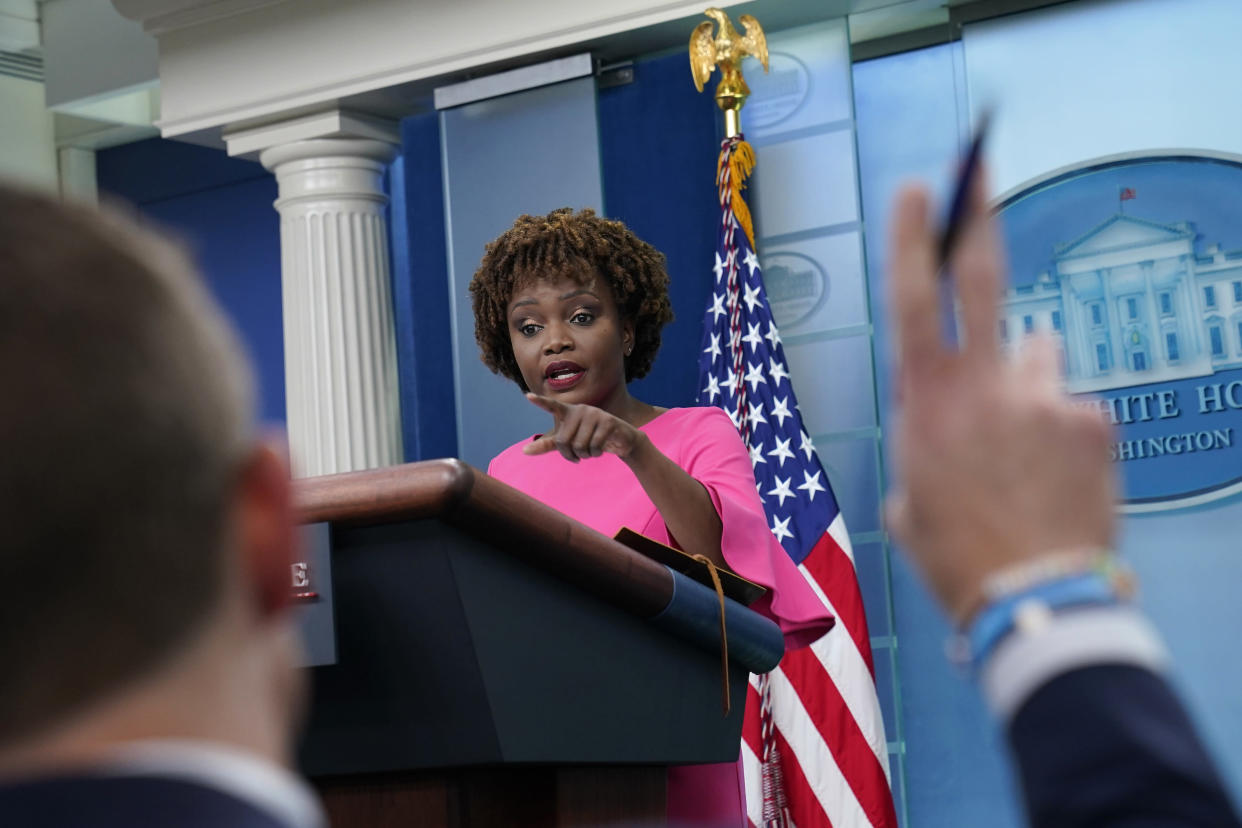 “We’ve seen these historic levels of quitting,” said Nick Bunker, director of economic research at the Indeed Hiring Lab. ”We’ve also seen really rapid employment growth so that it’s people sort of taking advantage of the situation, getting new jobs, getting higher wages. So I think it is from a worker point of view, pretty much broadly a positive story.”

More than 4 million workers have been quitting their jobs each month over the past year, according to Labor Department data, accounting for almost 3% of all workers leaving jobs each month — most for other work opportunities.

“It’s a worker’s market right now,” then-White House press secretary Jen Psaki said last year, months before leaving herself for a role at the news outlet MSNBC. “We know that. People are looking for more dependable benefits. They’re looking for wages that are higher.”

The White House has bristled at the term “great resignation” and has tried to reframe it as what Bharat Ramamurti, the deputy director of the National Economic Council, calls the “great upgrade.”

Congress sets the budget for the Executive Office of the President, and that budget has remained largely flat even as costs have gone up, including some driven by the coronavirus response.

Biden also expanded the staff when he entered the White House, owing in large part to the centralization of the federal COVID-19 response and climate policy within the West Wing. The 2021 report showed an average salary of about $94,000. That’s 40% higher than the country’s median household income, but still less than what the well-credentialed staff could earn in the private sector.

“White House salaries tend to be well below the salaries that people have before they come into the White House,” said Kevin Hassett, former chair of the Council of Economic Advisers during the Trump administration. “This follows naturally from the fact that a president can choose people who are at the top of their professions. So when people return to their outside profession, the salary likely increases for almost everybody.”

‘Nobody goes to the White House to coast’

Veterans of previous West Wings who serve in or are in contact with Biden administration officials say there is a notable lack of joy across the White House complex. The pandemic has diminished some of the benefits of the job that typically make the demands of the work more bearable, they said.

“These aren’t perks in the superficial sense, but they’re moments that build your team, sharpen focus on the mission, and recharge your batteries,” said Eric Schultz, principal deputy White House press secretary at the end of the Obama administration. “Nobody goes to the White House to coast, but the jobs are draining, so inspiration along the way can mean a lot.”

The pandemic meant few birthday parties in the bowling alley in the bowels of the Eisenhower Executive Office Building and curtailed the opportunity to give loved ones a tour of the historic workplace. In December, the White House was unable to hold staff holiday parties because of COVID-19, and travel is only just returning to pre-pandemic norms. For Biden’s first year in office, most staff could not even stand on the South Lawn driveway to view the president arrive or depart on Marine One.

The COVID precautions around Biden himself, including testing for those who might encounter him daily, mean many staff members have few personal interactions with their boss. For some departing staff, a highlight of their time in the White House came when former President Barack Obama visited the White House and talked with staff on the anniversary of the Affordable Care Act. Aides said he spent almost five hours in the building and made a point of mingling with staff — in many cases spending more time with them than Biden has been able to.

Biden, aides said, has restarted one pre-pandemic tradition: accommodating departure photos for staffers and their families who are leaving the administration.