An effigy of climate activist Greta Thunberg has been found strung up and hanging from a bridge in Rome.

Dressed in a yellow poncho, the effigy had Greta’s pigtail braids with a sign in English saying “Greta is your God”.

Police in the city have begun an investigation after images of the dummy were shared on social media, saying that the inquiry had been opened after “aggravated” threats.

Local media reports say the effigy was strung up by a group called Gli Svegli (The Awake in English).

Rome mayor Viginia Raggi said in a post on Twitter that she stood in “solidarity” with the 16-year-old Swede and her family.

The incident comes as climate change protest group Extinction Rebellion have begun two weeks of demonstrations across the world in an attempt to get governments to change environmental policy.

More than 280 activists have been arrested in London after just a day.

The UK parliament was the first in the world to declare an environmental emergency back in May, with the government promising to make sure the UK will produce net zero greenhouse gas emissions by 2050.

Greta Thunberg recently gave an impassioned speech at the United Nations, where she criticised world leaders for their current environmental policies.

She said: “People are suffering. People are dying. Entire ecosystems are collapsing. We are in the beginning of a mass extinction and all you can talk about is money and fairytales of eternal economic growth. How dare you.”

:: A New Climate is a series of special podcasts from the Sky News Daily. Listen on Apple Podcasts, Google Podcasts, Spotify, Spreaker

The campaigner’s comments drew the attention of climate change sceptic Donald Trump, who appeared to mock the teen by tweeting: “She seems like a very happy young girl looking forward to a bright and wonderful future. So nice to see!” 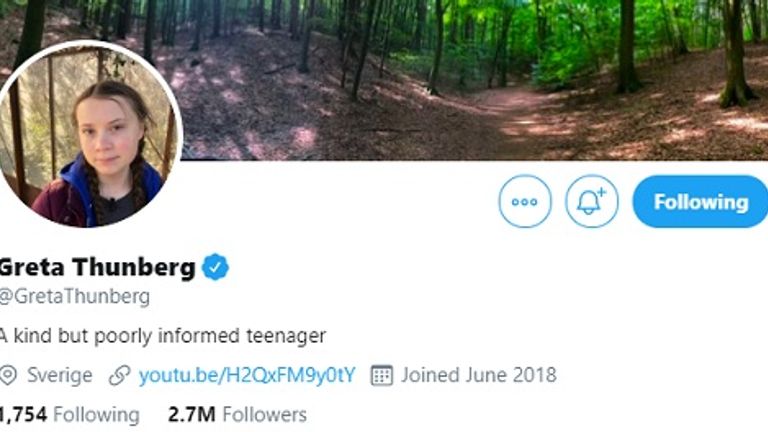 On both occasions, Thunberg later adapted her biography on Twitter with the quotes about her.