The grieving widow of the director killed in a freak giraffe attack has come face to face with the animal that headbutted her husband to death.

Dina Carvalho, wife of South African movie director Carlos, 47, traveled to the Glen Afric reserve to face down the giraffe.

Seeking closure, she returned to the spot just days after her husband was killed. 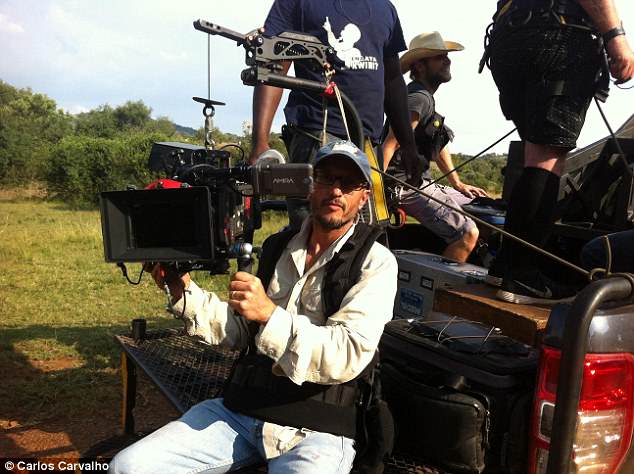 Carlos had been sent flying by the giraffe, named Gerald, after it swung its neck at him. He landed in a crumpled heap and blood reportedly poured from his eyes, nose and ears.

The mother-of-two paced alongside the giraffe as he pushed towards her, against the fence of his enclosure.

Describing her feelings after the brave act, Dina told The Sun: ‘I wanted to feel what my husband must have faced in those last terrifying seconds of his life.

‘The whole time we paced Gerald never took his eyes off me. So I just stared back at his restless eyes and the horns that killed Carlos thinking about that awful moment he struck my husband.

‘I felt numb, defiant and incredibly sad all at the same time.’

She confronted the animal on Thursday after spending hours on the set of Premium Nanny 2 hearing the film crew describe her late husband’s final moments.

Carlos Carvalho had worked on ITV’s popular Wild at Heart series that featured a British family building up an animal hospital in the South African bush. 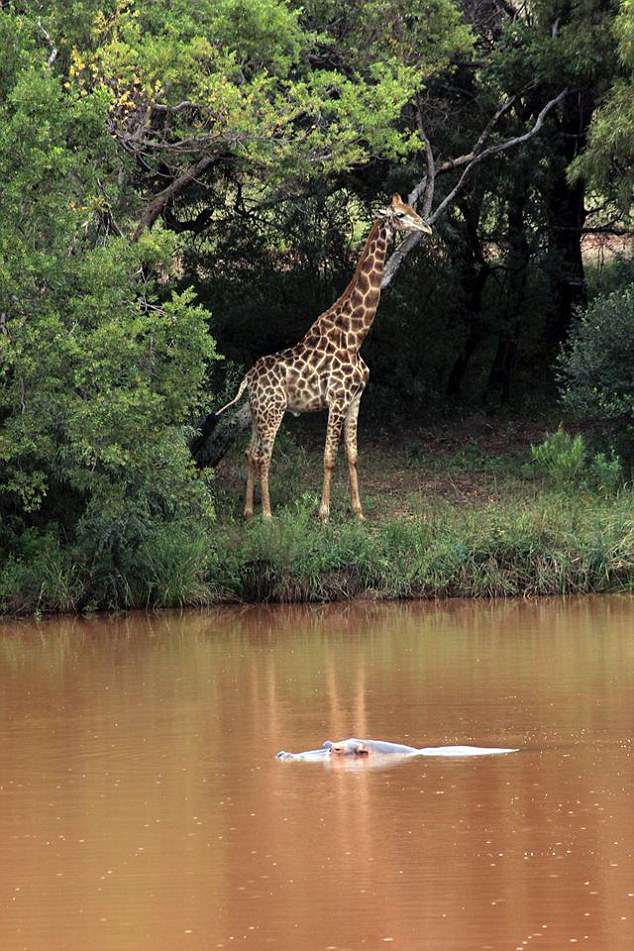 Gerald the Giraffe (pictured) crushed the camera man’s skull while he was filming in Broederstroom, South Africa

But the 47-year-old was sent flying 16 feet through the air while working on a feature film with Gerald the Giraffe after the animal headbutted him, causing devastating head injuries.

He was airlifted from the scene in Broederstroom, South Africa, to the same hospital where British safari park owner Mike Hodge is recovering from a lion attack in Johannesburg but surgeons were unable to save him.

Drikus Van Der Merwe was part of the filming crew and said he was stood next to Carlos when he was attacked.

‘He started chasing the boom swinger who joined our unit,’ he added. ‘The giraffe followed him but we didn’t feel threatened because he just seemed to be inquisitive.

‘We started shooting close ups of its body and its feet. Then while Carlos was looking through the camera eyepiece Gerald swung his neck and hit him against his head. 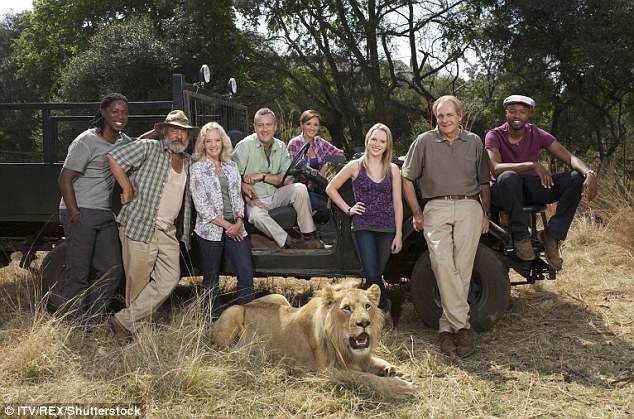 The Wild at Heart TV series followed the story of a British family who went to South Africa to set up a farm (pictured, the cast of the show) 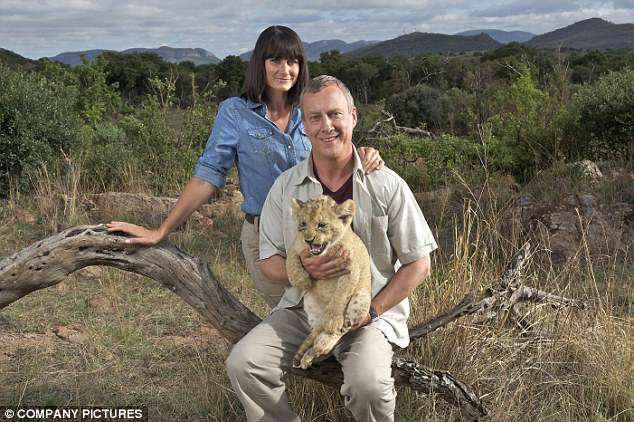 The film-maker worked on the ITV Series Wild at Heart (pictured, the show’s stars Dawn Steele and Stephen Tompkinson

‘It came out of nowhere and Carlos didn’t even see it coming. He wasn’t aware of the danger.’

‘I could see he was unconscious,’ he said. ‘There was blood coming out of his eyes and ears so I knew he had a severe head trauma. But I never thought he would die.

‘Out of all the wild animals we have filmed I can’t believe a giraffe killed Carlos. I suppose we get so used to filming animals that we become desensitised in a way.’

Moments before the attack, photographer Van Der Merwe took the final pictures of Carlos alive as he worked on rigging.

He said: ‘Carlos was standing in front of the giraffe, the animal spread its legs, bent its neck and swung its head at Carlos. It was a terrible accident and we are heartbroken.

‘Gerald will remain at the lodge. He did nothing wrong.’

Carvalho won a number of awards since he began his career as a runner in 1992.

They included a Silver Lion at the Cannes Film Festival in 2003 for a public service announcement for Childline and a 2014 African Movie Academy Cinematography Award for his work on ‘The Forgotten Kingdom’. 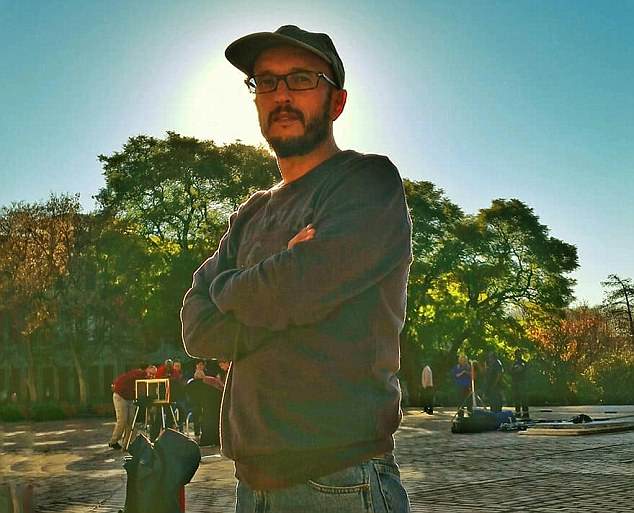 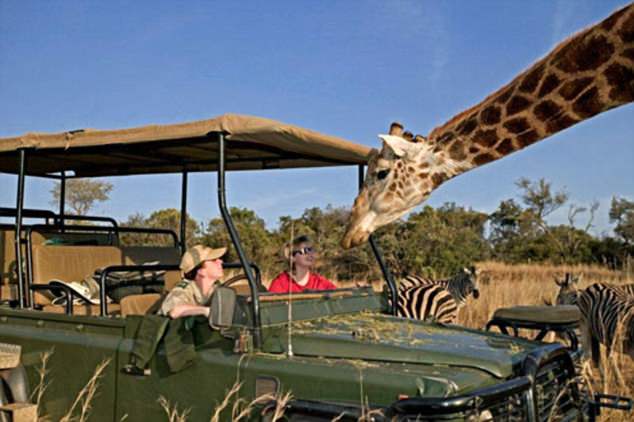 Gerald the Giraffe (pictured) attacked the film-maker, who worked on the hit TV show Wild at Heart, in which a British family set up a farm in South Africa

Adult male giraffes which stand 18 feet tall and weigh up to 1.2 tons fight with their heads in what is called necking to prove dominance and for the right to access to females.

As the video below shows it can be very violent and can result in serious death or injury.

Carlos had his skull crushed by the horns known as ossicones on the top of the giraffe’s head .

The filmmakers Cape Town agent Sandi-Lee Slabbert said: ‘The giraffe headbutted Carlos during filming and he was rushed to hospital but died that night from head injuries.

‘He was an amazing, amazing man and fabulous to work with. Everyone loved him and loved working with him.

‘He was very well known at Glen Afric where he filmed a lot. He is a very sad loss to everyone who knew him and the industry.’ 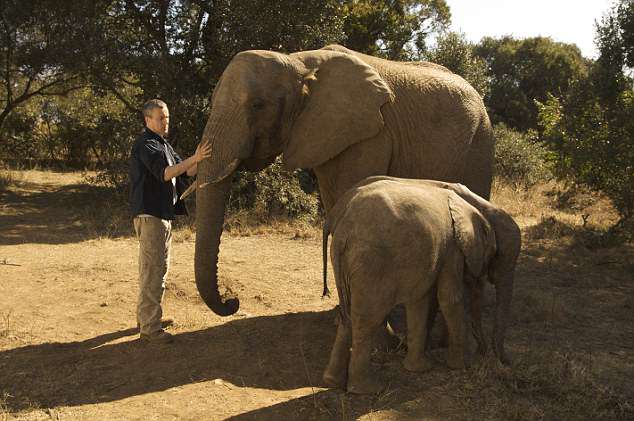 The attack happened in the park where ITV show Wild at Heart was filmed (pictured, the show’s star Stephen Tompkinson with elephants on set)

In 2014, Carvalho, who was the director of photography for The Forgotten Kingdom, the first feature film produced in Lesotho, won the Haskell Wexler Award for Best Cinematography at the 14th annual Woodstock Film Festival Maverick Awards Gala held in New York.

He has won a number of awards for TV, documentaries and films over a long career.

CEO at CallaCrew who provide staff for the film world Jan Bowden wrote on Facebook that it was with a very sad heart that they had to announce the passing of Carlos.

She said: ‘He was filming a feature at Glen Afric and had a fatal run-in with a giraffe on set.

‘He was flown to hospital but succumbed to his injuries. He will be sorely missed. Our thoughts are with his family and friends.’

TV’s Wild at Heart on which Carlos worked for many of the seven series of which 65 shows were broadcast bewteen 2006 and 2012 was a favourite with the stars of the show.

Actor Stephen Tompkinson and actress Amanda Holden played the original husband and wife team who set up the veterinary practice and animal hospital in he African bush.

It was filmed at the majestic Glen Afric Country Lodge where Carlos died and a special set was created called Leopard’s Den in the grounds which is still a a tourist attraction.

The wildlife park is home to elephants, lions, cheetahs, giraffe, hippos and monkeys and overlooks the Magailesberg Mountains and is a popular spot for TV and film programmes.