New York: Robert Frank, a giant of 20th-century photography whose seminal book The Americans captured singular, candid moments of the 1950s and helped free picture-taking from the boundaries of clean lighting and linear composition, has died. He was 94. 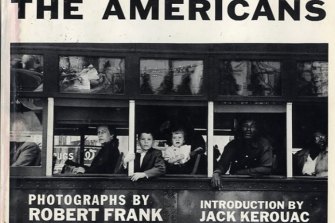 Frank died on Monday in Inverness, on Cape Breton Island in Nova Scotia, according to his second wife, June Leaf. The couple divided their time between Nova Scotia and New York.

The Swiss-born Frank influenced countless photographers and was likened to Alexis de Tocqueville for so vividly capturing the United States through the eyes of a foreigner. Besides his still photography, Frank was a prolific filmmaker, creating more than 30 movies and videos, including a cult favourite about the Beats and a graphic, censored documentary of the Rolling Stones' 1972 tour.

Black-and-white Super 8 pictures by Frank were featured on the cover of the Stones' Exile On Main Street, one of rock 'n' roll's most acclaimed albums.

On Thursday, the band tweeted a tribute to Frank, calling him an "incredible artist whose unique style broke the mold." 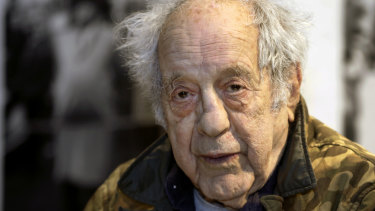 But he was best known for The Americans, a montage that countered the 1950s myth of bland prosperity and opened vast new possibilities for photography, shifting the paradigm from the portrait to the snapshot.

As essential to post-war culture as a Chuck Berry song or a Beat poem, Frank's shots featured jukeboxes, luncheonettes, cigars, big cars and endless highways, with an American flag often in the picture.

"Robert Frank changed the way we see," Mark Lubell, executive director of the International Centre of Photography, told The Associated Press on Tuesday.

"When The Americans came out, America was on the rise. America had won the war. But he saw something different, things that were not as rosy a picture as Life magazine might have had it." 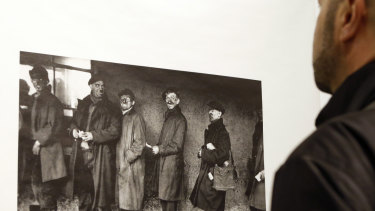 A photo by Robert Frank at the opening of the exhibition featuring Frank’s work, “Robert Frank: Books and Films, 1947–2016,” at New York University’s Tisch School of the Arts in New York in 2016.Credit:AP

He made the trip on a Guggenheim Fellowship secured for him by American photographer Walker Evans, whose stark pictures from the 1930s had helped define the country during the Great Depression.

"When you are an artist you are influenced by, you know, by the cars outside, by a painting, by literature, by Walker Evans," Frank told Art in America magazine in 1996.

Frank was a shy, sad-eyed man who openly, and gruffly, preferred being the storyteller and not the subject. His photographs, deadpan and unconventionally cropped, have the feel of someone standing on the outside, intently looking on. 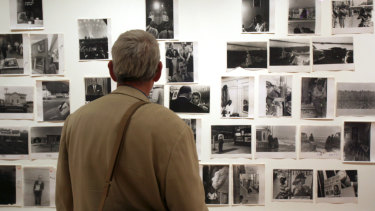 A man looks at prints from the Looking In: Robert Frank’s “The Americans” exhibit at the Museum of Modern Art in San Francisco in 2009.Credit:AP

"The more distressing new quality in Frank's pictures was their equivocating indirection, their reluctance to state clearly and simply either their subject or their moral," John Szarkowski, a former head of the Museum of Modern Art's photography collection, wrote in 1989.

Considered by many as one of the most important books of photography published since World War II, The Americans was not initially well received. Popular Photography could have been mistaken for the early opponents of Impressionist painting when it described the images as "meaningless blur, grain, muddy exposures."

Finding a publisher had proved a challenge for photos that often depicted American life as bleak, dark and unhappy: black and white passengers gazing out of a racially segregated trolley in New Orleans; a tuba player at a political rally in Chicago, his face obstructed by his instrument; two women looking out a brick building, their faces obscured by a fluttering American flag.

The Americans was eventually published by Grove Press, which had a history of releasing taboo-breaking works. The introduction was by On the Road novelist Jack Kerouac, who directly addressed his subject: "To Robert Frank I now give you this message: You got eyes." 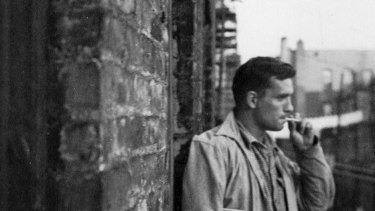 "The humour, the sadness, the EVERYTHING-ness and American-ness of these pictures! …" Kerouac added.

One of the images, Indianapolis, 1956, shows an unsmiling black couple on motorcycles staring at nothing in particular as a crowd surrounds them. As with all his photos, Frank left the interpretation to the viewer, a mysterious quality the photographer himself seemed to share.

"He has by turns been described by people who do not know him as ornery, reclusive, hard, manipulative to the point of destructive, and cold as a bowling ball. He rarely gives interviews," Vanity Fair reported in 2008. "He speaks in short, elliptical snatches and views life with the detached outlook of an undertaker."

A new edition of the monograph was published in 2008 by the famous German photo book publisher Steidl to mark the book's 50th anniversary. Exhibitions on the occasion were held in 2009 at the National Gallery of Art in Washington, DC, the San Francisco Museum of Modern Art and the Metropolitan Museum of Art.

Born in 1924, he grew up in a wealthy Jewish family that lived in Switzerland during World War II, sparing Frank the worst of the Nazis, but leaving him with a lasting awareness of human tragedy.

Finding his father too materialistic and his early surroundings too narrow, he emigrated to New York in 1947. Inspired at first by European Modernism, he had already spent years working in photography studios and had assembled a portfolio of 40 pictures that later came out in book form.

In his new country, he started out as a fashion photographer for Harper's Bazaar and became friends with Willem de Kooning and Allen Ginsberg, among others. After meeting Edward Steichen, then director of the Museum of Modern Art, he was included in a 1951 group exhibition at the museum, "51 American Photographers." In the early '60s, the Art Institute of Chicago presented a solo exhibition of Frank's work, and MoMA again featured him in a show in 1952. The first retrospective of his work was in 1974 in Switzerland at the Kunsthaus Zurich.

The harsh reaction to The Americans soured Frank on photography for a time and led him to movies, including the 1959 short Pull My Daisy and the notorious Rolling Stones documentary C—sucker Blues. Both the Stones movie and Pull My Daisy, based on a Kerouac play and featuring fellow Beats Allen Ginsberg and Gregory Corso, featured prearranged scenes shot in a style that made the action appear spontaneous.