President Donald Trump is desperate for a flashy, big win in foreign policy after a series of less-than-successful stunts.

His pullout from the Iran deal has been widely criticised; his advisers' prediction that our European allies would follow us seems highly questionable. Moving the US Embassy to Jerusalem touched off mass protests in which about 60 Palestinians were killed. His concession to China on ZTE led to bipartisan scorn. In short, he has put all his eggs in the North Korea basket. 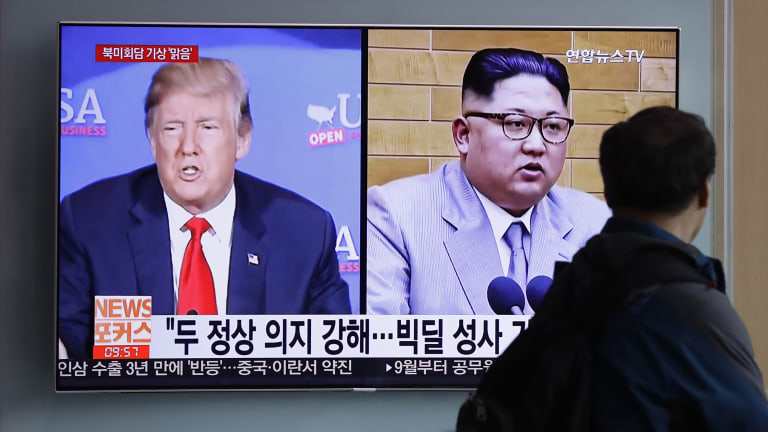 Donald Trump and Kim Jong-un are due to meet in Singapore on June 12 but the meeting is now in doubt.

If it is the latter, Trump may be particularly susceptible to Pyongyang's posturing. Trump's reliance on "chemistry" with world leaders and penchant for interpreting other countries' moves – be it the "nice" release of three Americans held in North Korea or a red-carpet welcome in China (the biggest ever!) – in personal terms are counterproductive when dealing with a methodical, aggressive regime. Instead of winning favour, Trump's childish rhetoric merely confirms adversaries' belief that they can manipulate him with a few superficial moves.

Nicholas Eberstadt warned in the Washington Post in early March: "A good North Korean negotiating team seizes immediate control of the agenda. Typically it will suddenly stop talks, or unexpectedly demand resumption, to throw the other side off its game. If Team North does not take control of the agenda, talks get shut down until Team North says it is time to start talking again."

In short, if they did not see Pyongyang's latest manoeuvre coming, Trump and his team are more gullible than we imagined.

Pyongyang also cleverly targeted national security adviser John Bolton, whose touting of the "Libya model" (in which its leader was deposed and then killed in rebel custody) was needlessly provocative.

The Associated Press explains: "Though North Korea has been for the most part silent about its intentions for the meeting, the announcements underscore two of its biggest concerns – the future of the nearly 30,000 US troops in South Korea and claims coming out of Washington lately that sanctions and Trump's 'maximum pressure' policy are what drove Kim to the negotiating table.

"But defanging Bolton, the most militant of Trump's advisers, is now also apparently a major priority.

"'We do not hide our feeling of repugnance toward him,' North Korea said of Bolton in a statement attributed by state-run media to senior Foreign Ministry official Kim Kye Gwan…

Most US presidents would see North Korea's threats as a test and would therefore neither budge from the US negotiating stance nor allow our foe to dictate who advises the President. Whether Trump will crumble (as he did in offering China an olive branch on ZTE) remains to be seen. This should nevertheless serve as a warning for US officials, and Trump specifically, to cut the happy talk and maintain a high degree of scepticism about Pyongyang's intentions.

Trump, on the other hand, has gotten nothing concrete from North Korea on its denuclearisation; he has not gotten anything of lasting value. Second, the promise of a summit is already buying Kim some international stature and credibility while raising questions as to whether our South Korean partners have been engaged in some wishful thinking regarding the prospects for denuclearisation.

By offering North Korea a summit, Trump is now at risk of losing something of no strategic value – a world-class photo op – if he does not accede to North Korea's table-setting demands for the summit. And should he ever get into a room with Kim, one can only imagine what he would give up to get his own version of "peace in our time".