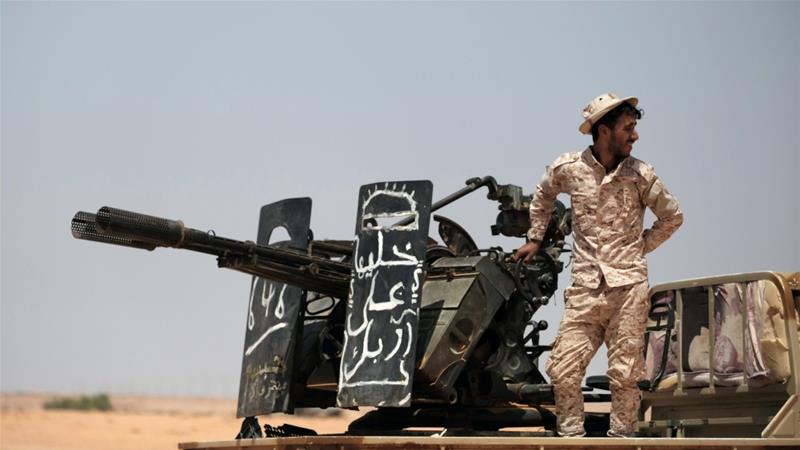 Ahmed Mismari, spokesman for Haftar’s self-styled Libyan National Army (LNA), said on Sunday rival forces from the war-torn country’s west were mobilising around front lines in the centre of the country.

In a media briefing, he said the eastern-based forces were ready to respond to any attempted attack on its positions around the coastal city of Sirte and Jufra, further inland.

Mismari’s comments were the first by the LNA after the announcement on Friday of a ceasefire and a call for the resumption of oil production by the Tripoli-based Government of National Accord (GNA), headed by Prime Minister Fayez al-Sarraj.

“The initiative that al-Sarraj signed is for media marketing,” Mismari said. “There is a military build-up and the transfer of equipment to target our forces in Sirte,” he added.

“If al-Sarraj wanted a ceasefire, he would have drawn his forces back, not advanced towards our units in Sirte.”

Mismari made no reference to a parallel ceasefire call also issued on Friday by the head of Libya’s eastern-based parliament, Aguila Saleh. Saleh has gained influence compared with Haftar since Turkish military support for the GNA forced the LNA to retreat from a 14-month offensive on Tripoli in June.

Al Jazeera’s Malik Traina, reporting from Misrata, said: “Previously in any negotiations or any peace talks in Libya, Haftar was a very significant member and very involved in these kinds of talks – and he’s feeling sidelined now.”

Traina noted this was not the first time Haftar had rejected a ceasefire agreement. In January, Turkey and Russia also tried to support a truce that was signed by the GNA in Moscow, but not by Haftar.

Meanwhile on Saturday, Libya’s High Council of State, an advisory body to the GNA, vehemently rejected any dialogue with Haftar.

In a statement, it underlined the need to seriously work to end the “state of insurgency” in the country through an immediate ceasefire and the need to enable the government to take control over all of Libyan soil.

“Any dialogue or agreement should be under the Libyan political agreement, which regulated the mechanism of dialogue to be only between elected bodies,” it added.

With Haftar loyalists blocking oil facilities in the country in recent months, the council also called for resuming the production and export of oil – Libya’s main source of income – and holding those responsible for the closure of the facilities accountable.

Libya splintered into rival political and armed groupings after the uprising that toppled and killed longtime ruler Muammar Gaddafi in 2011.

The oil-rich country remains deeply divided between factions based in the east and west that back rival governments and parliaments.

The conflict has become an arena for regional rivalries, with Haftar being supported by Egypt, Russia and the United Arab Emirates and the GNA having the backing of Turkey and Qatar.

There has been little fighting since June. In the past, both sides have accused each other of quickly violating truces and using them to rearm.