The image of Bahraini footballer Hakeem al-Araibi – barefoot, shackled, and surrounded by guards – shocked many across the world, and reinvigorated the resolve of his supporters.

This contrasts wildly with the moment Araibi’s release was announced on Monday. The feeling of injustice drove the global pressure on Thailand to drop Bahrain’s vendetta against a young man who had escaped torture and imprisonment to continue his football career in Australia. 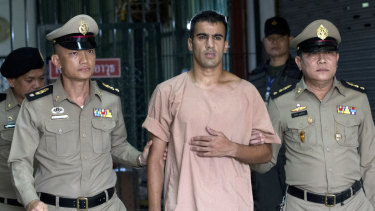 As we celebrate Araibi’s safe return to his home, wife, and regular life in Melbourne, we must remember those who have the misfortune of languishing in Bahrain’s prisons.

Hours after hearing about Araibi’s release – resulting from Bahrain’s decision to finally withdraw its extradition request – my brother-in-law, Sayed Nizar, suffered a miscarriage of justice. Bahrain’s top court upheld his sentence to three years’ imprisonment. All in all, he will be spending 11 years in prison.

Sayed Nizar, his mother, Hajer, and cousin Mahmood remain behind bars because of my human rights activism in London.

Araibi’s result comes just a month after the UN declared that my family are imprisoned arbitrarily. Unsatisfied with its work so far, Bahrain rubs salt further into the wounds by denying Hajer medical care to examine a lump in her breast. She has been suffering for six months with no respite, and is now becoming increasingly fearful that it may be cancerous.

This ordeal could end with a simple trip to the hospital. Instead, the Bahraini government uses her health as a bargaining chip, hoping they will silence me. Their brazen attitude is no doubt supported by their confidence that they can get away with anything.

Araibi’s case, however, has forced them to think again. International pressure was crucial to securing his freedom, with the Australian government – through its Prime Minister and Foreign Minister – making it explicitly clear that Araibi has the full weight of their support. International scrutiny forced the despotic regime to back down, as they could not act with impunity.

Like Araibi, I too am a refugee who fled torture in Bahrain. The British government, however, has offered no support for me or for the freedom of my family. They have done nothing but embolden the Bahraini regime to take further measures to punish my family.

British ministers have insisted on the integrity of Bahrain’s assurances and have refused to consider any alternative. In doing so, they have disregarded the findings of the UN, Human Rights Watch and Amnesty International. Curiously, these same sources are cited as rationale for cold diplomatic relations with some states. Why turn a blind eye to Bahrain?

When states put their weight behind a cause, positive change happens. Araibi offers a prime example of the power of diplomatic relations. In the context of the UK, you need to look no further than Matthew Hedges, the student released by the UAE swiftly following the intervention of the UK Foreign Secretary.

Unfortunately for me, I am not a British citizen so the British government does not deem it important to take me seriously. Nor am I a refugee in Australia, a country where the government appears to take the necessary steps to uphold its duty to its refugees.

Today, as I attended the funeral of David Mepham, who once led Human Rights Watch in the UK, I met some Foreign Office ministers who consistently wave away concerns for my family’s plight. These ministers attend the funeral of a champion for human rights, and yet they show indifference to the causes that Mepham dedicated his life towards.

Soon, Araibi will be reunited with his beloved wife. I had the joy of experiencing this same feeling when reunited with my wife and my infant son two years ago – after Bahrain detained them and released them following an international outcry. No words can describe that moment of euphoria.

While we enjoy such moments, we must pause to remember the ordeal suffered by 4000 others in Bahrain’s prisons. Our actions can be hope for them, and we must endeavour to reunite them with their own families so that they, too, can enjoy the same moment one day.

As Nobel peace prize laureate Elie Wiesel once said: “There may be times when we are powerless to prevent injustice, but there must never be a time when we fail to protest.” Injustice may be beyond our control, but as long as we do our best to stand up against it, there will always be hope.

Sayed Alwadaei is director of advocacy at the Bahrain Institute for Rights and Democracy.