HARDMAN: Brighton Beach posse were on a mission to bin the bad stuff

The Brighton Beach posse were on a mission to bin all the bad stuff so it’s rather lucky the drizzle kept the nudists away, says ROBERT HARDMAN

Maybe it was just as well that the grey skies and intermittent drizzle had kept the nudists away. Because nothing was going to stop the beady-eyed army marching along Brighton’s famous beachfront this weekend with one aim in mind: to bin the bad stuff.

Gloves on, bags in hand (one for recycling, one for glass, one for the rest) and a pincer-clawed litter-picker in the other, the Daily Mail’s Great Plastic Pick Up campaign was in full swing for several hours along Brighton’s eastern seafront.

Even the stretch of official nudist beach along Madeira Drive, I am sorry to say, was strewn with its fair share of detritus. It’s not just clothes that naturists like to leave behind, it seems. 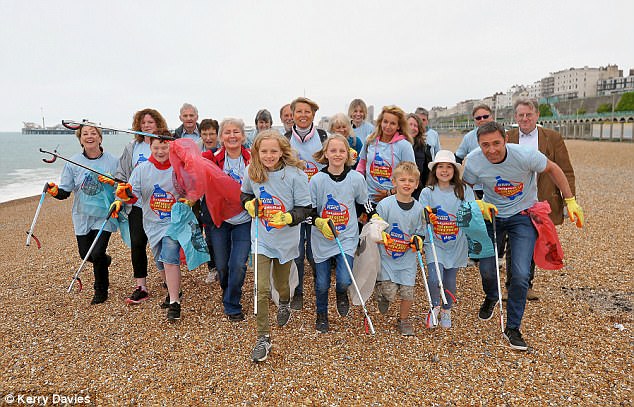 Maybe it was just as well that the grey skies and intermittent drizzle had kept the nudists away. Pictured: Hardman joins volunteers on Brighton Beach on Saturday taking part in The Daily Mail Great Plastic Pick up

By the end of the operation, though, this purposeful gang had managed to rid one small stretch of Britain’s coastline of 30 bagloads of plastic bottles, plastic tops, crisp packets, coffee cups, beer cans – and a surprisingly large number of disposable barbecues.

It was the same story right across Britain, this weekend. So take a bow, all of you who turned out. From the beaches of Cornwall to inner-city Glasgow, from rural lay-bys and clogged canals to suburban playing fields and municipal parks, thousands of you were magnificent as you gave up your time to clear up the mess.

It is a mess that, in some cases, has been sitting there for years and might have stayed there for centuries. For, as we know, plastic never really disappears. Most of it morphs into toxic particles which leak in to our soil, sea and food chains. Each year, the world dumps at least eight million tons of it in to our oceans, with the truly disgraceful prospect of there being more plastic than fish in the sea come the year 2050.

Put another way, 1,000 pieces of litter are discarded for every 100 yards of coastline each year.

Centuries from now, archaeologists will look back and marvel at the selfishness of a generation which not only regarded single-use bags, bottles, straws and packaging as perfectly acceptable but then couldn’t even be bothered to put them in a bin.

At least, the boffins of the future will have marginally less stuff to analyse after this weekend.

With more than a thousand Great Plastic Pick Ups to choose from, I set off to join one in Brighton where a pumped-up posse were gathering shortly after breakfast.

It only takes one person to set the ball rolling and, in this case, it was local resident Lucy Agace. 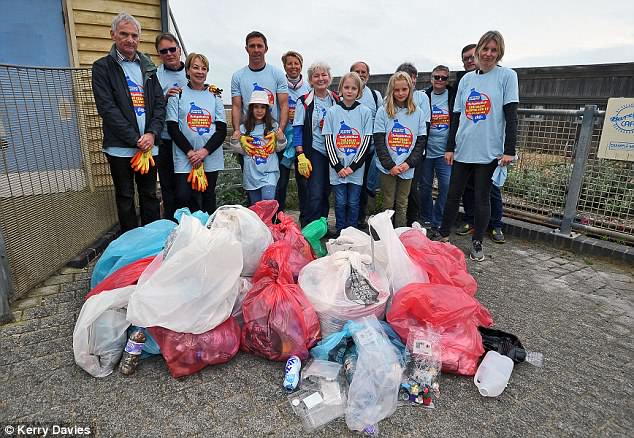 This is a cause which unites people of all ages and outlooks wherever they are, writes HARDMAN

She has seen the damage caused by the spread of plastic at first hand after spending much of the last 30 years underwater as a marine photographer and the author of several diving guidebooks. So when she read about the Daily Mail’s campaign, together with Keep Britain Tidy, she organised a time and a place and put it on www.greatplasticpickup.org.

Gatwick firefighter Jake Alexander, 43, had made the journey to the coast at the insistence of his daughter, Poppy, eight. ‘I saw a picture of a crab stuck in a plastic bottle and I want to do something about it,’ said Poppy firmly.

I met mortgage administrator Cathy McTavey, from London, who had never even set foot in Brighton before. Her partner, property administrator David Lipscombe, had seen a poster for the Mail’s campaign in a south London supermarket. They had gone online to look for a Great Plastic Pick Up and had decided to make a day of this one.

Retired hospital worker Theresa Wilkins had made the short journey from her home in Saltdean. She explained that she always picks up litter on the beach and was delighted that someone had finally got round to organising something. ‘I remember paddling here last summer and feeling something in the water,’ she explained. ‘I counted 16 plastic bags washing around my knees.’

Brighton & Hove City Council had turned up to help with the Mail’s campaign, too, providing gloves, litter-picking sticks and a rubbish van. The council’s own cleaning team were already out patrolling the area but there is only so much they can do.

Ultimately, our litter problem is down to the litter lout, not the town hall.

One supervisor explained that the team had collected 40 tons of rubbish from municipal seafront bins on the morning after the latest Bank Holiday. That was just the stuff that people had put in the right place, not all rubbish abandoned haphazardly by the selfish and the idle.

A crowd of all ages had gathered outside the Yellow Wave Beach Club, midway between Brighton Pier and Brighton Marina, for this operation. After a short briefing from Lucy on what should go in which bags, we dispersed in every direction.

I set off with Poppy Alexander and her father, Jake. Both voiced frustration at the casual way people toss aside whatever they have just finished with. ‘I chased a guy down the road the other day after he dropped a cider can,’ Jake explained. ‘He was actually a bit embarrassed. But you never know how people will react.’

That was a recurring concern among all those I spoke to. It’s all very well remonstrating with a thoughtless litter lout but we have all read or heard of those who end up on the receiving end of a stream of abuse – or worse – for their troubles. ‘If you’re an older person or a woman and you are on your own, you think twice, don’t you,’ said Jennie Taylor.

That did not stop web designer Louise Ford, 22, and her mother, Fontaine, 55, a retail assistant. They noticed a group of eight young men who had been drinking plastic bottles of beer near the pier and then just walked off leaving them on the shingle. ‘I asked them to pick them up – and they did,’ said Louise.

Local pubs may have banned customers from taking glassware outside – with a happy reduction in the amount of broken glass – but it was clear from this haul that many drinkers still cannot be bothered to take their empty plastic glasses or bottles to the nearest bin.

By lunchtime, a very respectable pile of rubbish had been accumulated back at the meeting point. Most of it was plastic, though there were surprises, too. Cathy McTavey had not only picked up the remains of a disposable barbecue but a wok which had been cooking on it. I suppose if someone is too lazy to put a barbecue in the bin, then they are probably too lazy to wash up a frying pan, too.

Everyone remarked that they had genuinely enjoyed this experience, not least because they had something to show for it. Organiser Lucy Agace was grateful to the Mail and very happy with the results. But she would like to see this repeated until everyone gets the message: we have to stop using something once and then throwing it away.

‘Supermarkets have cut right down on plastic bags at the check-out. So why do they still have them in the fruit and veg section?’ she asked. ‘The big challenge is to eradicate single-use plastic full stop.’

She says she has now become so worried about the quantities of plastic in the sea that she has virtually given up eating fish.

A few miles away, in the East Sussex county town of Lewes, I came across an equally impressive Great Plastic Pick Up in the woods between the local playing fields and the main route to the port of Newhaven. In a matter of minutes, organiser Steven Sparks had filled an entire bin liner with plastic bottles, a motorbike battery and a lot of beer cans.

‘I’ve been blown away by the amount of stuff we’ve found – especially the amount of McDonald’s packaging.’ The nearest McDonald’s, he explained, was almost ten miles away. ‘So I suppose it must take people around ten miles to eat a meal and then they chuck it out of the window here.’

His six-year-old son, Austin, was baffled by a strange plastic discovery in the undergrowth. We old-timers had to explain that it was an ancient form of entertainment known as a cassette tape. There were many young children here, all of them with an impressive enthusiasm for the task in hand. Helen Parkyns had come with an added incentive – a freshly-baked lemon drizzle cake to be shared among all willing helpers afterwards.

Her husband, David, and his friend, Paul Dennis, had done some comparative studies on their findings. The ‘best before’ date on one crisp packet showed that it was at least 12 years old and yet it had hardly deteriorated. Next to it, they had discovered an old pair of shoes which had moulded away to virtually nothing.

A further 12 miles to the east, a similar exercise was under way on the beach at Cuckmere Haven as Angela Tucker and friends rounded up bags of plastic bottles, plastic ties, plastic straws, plastic nets and lines – plus two dog leads, one flip-flop and a lunchbox still packed with its owner’s lunch.

‘It was quite therapeutic and we managed to have a laugh,’ she said. ‘It’s a good feeling to know, at least for today, this beach is clean.’

The sentiment was echoed nationwide. No one regarded this as a chore. Everyone seemed very pleased that the Mail had got people together in this way and they would gladly do it again.

This is a cause which unites people of all ages and outlooks wherever they are.

Take London caterer Hugh Walker who has taken extended leave from work to cycle around Britain’s entire coastline signing up cafes to a scheme to refill any water bottle for free (@hughsrefilltour). It is going to take him months. Having got as far as the south-west coast of Scotland this weekend, he couldn’t quite reach the nearest Great Plastic Pick Up in time – so he has now resolved to do one every day for the rest of his tour, starting this morning in Garlieston Bay.