‘He made FALSE promises’: Jo Johnson slams brother Boris as he urges MORE ministers to quit over ‘chaotic’ Brexit deal – and says it would be a ‘travesty’ if Britons don’t get second referendum

Jo Johnson, who resigned over the government’s handling of Brexit, claimed his brother Boris made ‘false promises’ during the referendum campaign and said he would welcome other ministerial resignations.

The former transport minister, who voted to remain in the EU referendum, said ‘if others follow, good on them’ when quizzed about the delicate nature of the Conservative frontbench.

He revealed he had been talking to other ministers and knew some were ‘reflecting hard’ on whether to accept Theresa May’s latest round of negotiations. 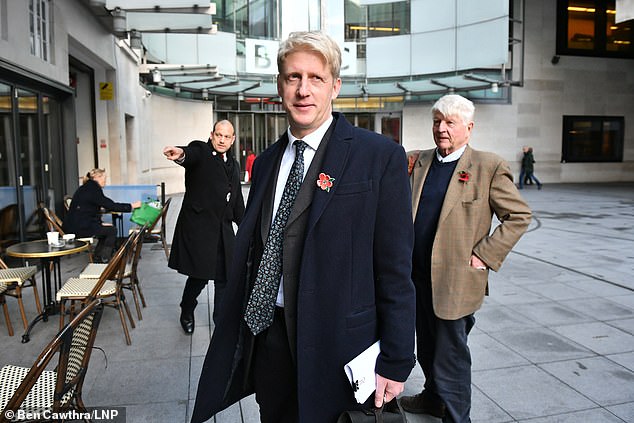 He labelled Theresa May’s Brexit plans as ‘delusional’ and said they put the country at the brink of the greatest crisis since World War Two.

Johnson, who was pictured with his father Stanley outside BBC Broadcasting House in London this morning, said: ‘I know many are reflecting hard about the deal that’s looming and how they will respond to it but it’s obviously for each of them to work out how best to respond.

‘It’s up to (lawmakers) to take a stand, I’ve done so, if others feel that it’s right for them to do so then good on them.’

Pressed on whether more ministerial resignations were coming, Mr Johnson told Radio 4: ‘It’s for each MP to come to his or her own view.

‘This is one of the most momentous questions we will ever face in our political careers. 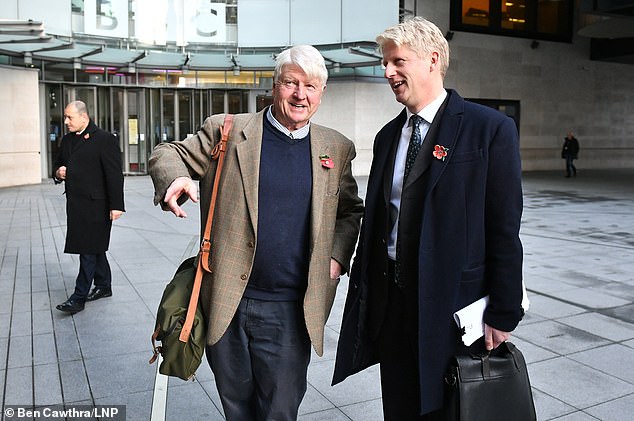 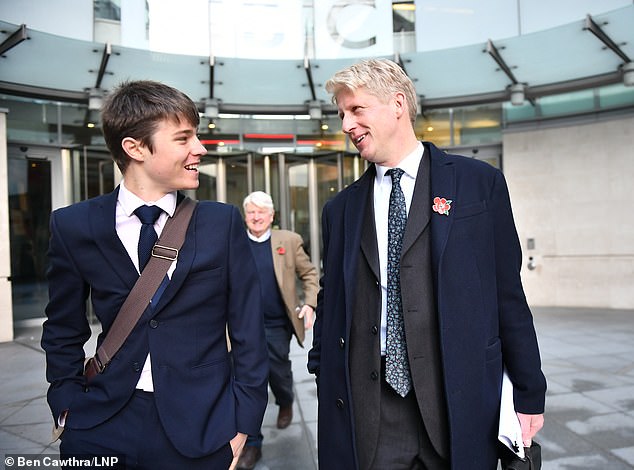 Jo Johnson outside the BBC headquarters in London this morning

‘And everybody is thinking very hard about it.’

Taking a thinly-veiled swipe at his brother, Johnson said the type of Brexit deal promised by his brother and the deal May was trying to tie Britain into were very different.

He added it would be a ‘democratic travesty’ if Britons were not able to go back to the polls to vote on the terms of the deal that may be struck with Brussels.

The terms Theresa May appears to have struck with Brussels would lead to Britain becoming a ‘vassalage state’, Johnson said, or would lead to the UK crashing out on WTO rules on the other hand. 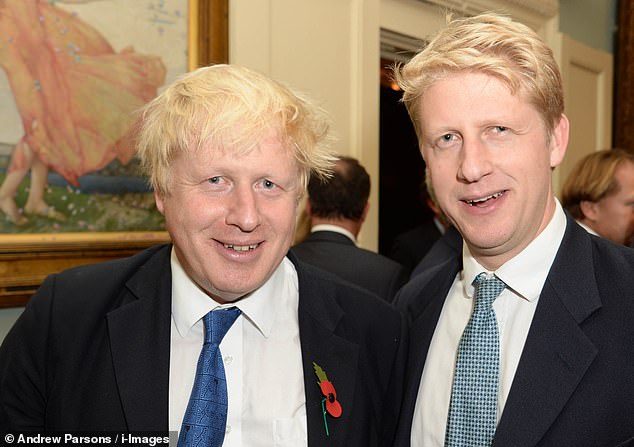 Jo Johnson resigned from the frontbench yesterday over the government’s stance on Brexit. Pictured: Boris Johnson pictured with his younger brother in 2014

Jacob Rees-Mogg, a leading Brexiteer in May’s party, told BBC Radio he rejected the call for another referendum but agreed with the criticism of the deal. He said in its current form it would not have enough Conservative support to get through a vote in parliament.

Green said: ‘My basic disagreement with Jo is about the need for a second referendum.

‘I think a second referendum would be divisive but it wouldn’t be decisive.

‘All the evidence is that the country is still, more or less, split down the middle.’

Yesterday, Boris tweeted of his ‘boundless admiration’ for his brother Jo

Speaking to the Daily Mail yesterday, Johnson said the ‘reality’ of what was being negotiated was far from what had been promised during the referendum campaign in 2016, and the country was faced with a ‘terrible’ choice between ‘vassalage and chaos’.

He told the paper: ‘I have always been a loyal member of parliament. I have never rebelled on anything. I’m not a serial mutineer. I’ve just reached the point where I cannot see the logic of how we are proceeding with Brexit.

‘It’s riddled with such contradictions as to make no sense at all now at any level. It is a fake fudge.

‘It was meant to be about sovereignty and trade deals, but we’re going to have no capacity to make meaningful trade deals.

‘It was meant to be about a brave new future as a deregulated economy. But we’re signing up to the common rule book on standards and health and safety, the environment and all the rest of it. It’s completely incoherent.

‘Rather than take this irrevocable step we should give the public a chance to reflect on whether this extraordinary course, which is so different from what was promised in the referendum, is really the one they want to go down. And if they do, well fair enough.

‘I really wanted the Prime Minister to make a success of Brexit, and stood by silently and watched over the past couple of years and lent every support I could in the Commons voting lobbies. But what’s the point when we’re about to do something which doesn’t stack up.

‘We are on the verge of doing the deal. I have waited for two years to give the Prime Minister space, not to tie her negotiating hand, not to narrow her freedom of manoeuvre.

‘But now that we’re actually at the point of being asked to vote it through in the coming days, at some point you got to say ‘hold on, does this make sense or not?

‘And to me it doesn’t anymore. I don’t want to resign from the government – you work hard for these privileged positions, but I’ve got to do it.

‘I’ve got no idea if others will follow, I’m not part of a plot, this is not about leadership. I’m not trying to oust Theresa May: I’ve wished her well. It’s not about her.’