A hearing impaired baby has been captured in a heartwarming video enjoying the sound of his mother’s voice for the first time.

The parents of Harrison Rex, now two, learnt about their son’s condition just 14 hours after he was born.

Mother, Eisha-Marie Stone, and her husband Chris Rex, from Perth, worked tirelessly to find a treatment for Harrison and eventually when he was six weeks old, he received his first hearing aid.

In the touching video, Ms Stone says her son’s name and as Harrison finally hears her he smiles from ear-to-ear.

‘I was not expecting the big emotional reaction from a 6.5 week old,’ Ms Stone said after sharing the video.

‘In all honesty I was still probably in denial about his impairment… until this moment. The pure happiness that exploded from his tiny body was such an amazing experience.’

Harrison had been in his grandmother’s arms at the time he first heard the world around him.

Ms Stone said that before he was given his hearing aids, she and her husband were offered little support. 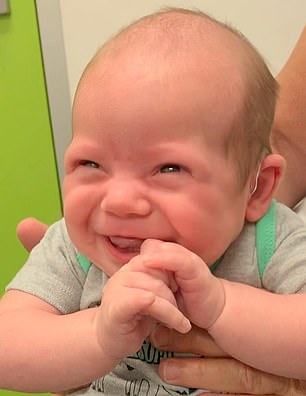 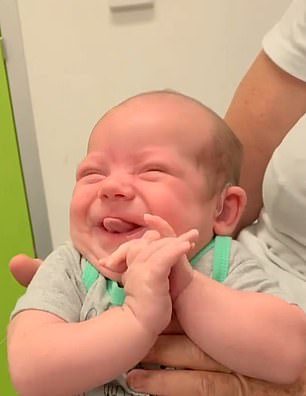 ‘No one would say anything to us when he was first born; not where to go, what to do. It’s like they didn’t recognise we were human beings who just had their lives shattered,’ Ms Stone told Perth Now.

‘I would stay up most nights Googling and Facebooking who could help us and what the best treatment would be for Harrison. That’s when I found Telethon Speech and Hearing.’

She said she couldn’t describe the moment her baby son first heard her, and that it was the ‘biggest feeling of relief’.

Harrison started a program with Telethon at four-months-old and now at the age of two, he can form sentences and speak like other children his age. 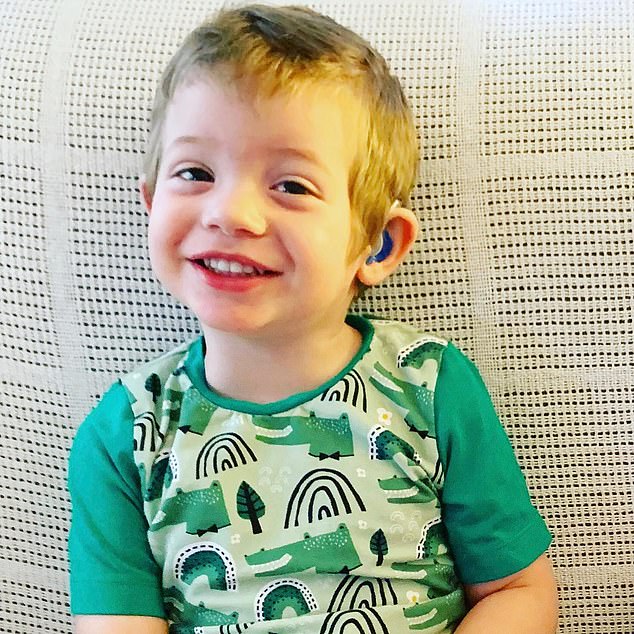 Harrison, who is now two-years-old can speak and form sentences like other children his age thanks to his hearing aids