A DOCTOR raged that a hero cop was asked to supply more evidence of his disability – telling officials “we can’t grow him a new leg.”

Special constable Ben Perry had part of his leg amputated after being hit by a car on the M42 in 2018. 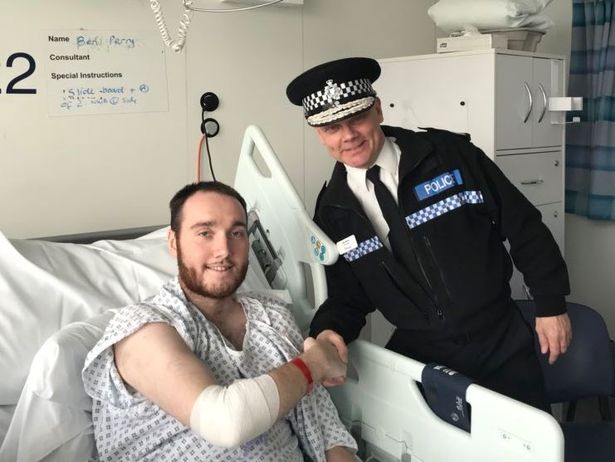 The 26-year-old had been trying to renew his blue badge, but was shocked when he was told that he didn’t qualify.

He shared the hilarious note that his doctor wrote to the council, bluntly telling them that they “can’t grow him a new leg.”

The former West Mercia Police officer lost part of his right leg in a collision when he stopped to help a driver who crashed into the central barrier of the M42.

He was then hit by another passing car and thrown into the road as he returned to his own car.

Ben, from Droitwitch, posted the cutting response from his doctor on Twitter and said: "After an appointment with my doctor, he composed a letter for me…

"Please can we show some appreciation for this legend."

A screenshot of the note read: "I was most surprised to be asked for a statement of fact regarding Ben's disability.

"I can assure you he has indeed had a traumatic amputation of his right lower leg in a road traffic accident.

"This has left him severely debilitated with chronic phantom limb syndrome and perpetual pain in his stump which on some days allows him to be independently mobile and other days leaves him unable to walk independently.

"I would be grateful if you could take this into account when dealing with his requests for blue badges in the future.

"It is of course unlikely that this situation will change unless medical science allows us to re-grow a new leg for him. Kind regards."

Hundreds of people responded to the post, with many saying that the process for Ben to get a blue badge was “ridiculous”.

His tweet racked up more than 124,000 retweets, with Ben adding that common sense had beaten the council and his application had been accepted.

“Where necessary, we request further information as set out by current, national guidelines.”