A heroic dog has made a miracle recovery after being stabbed in the skull when defending his owner against an armed robber in South Africa.

Gino Wensel, 40, was exercising his faithful German Shepherd called Duke when suddenly he became aware of a man coming towards him with a knife in his hand.

Duke did not hesitate, but bared his fangs and growled at the intruder, who turned on the dog and plunged a steak knife with all his force into its skull. 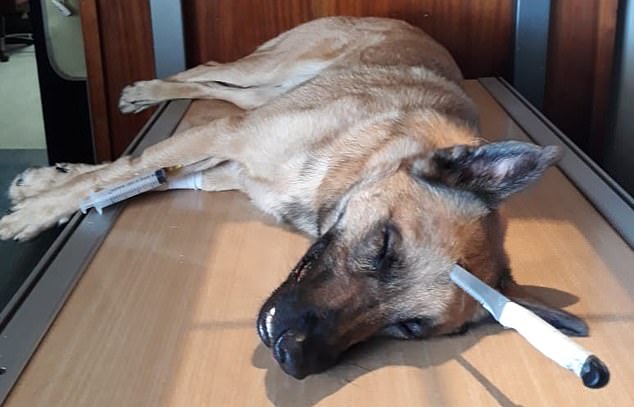 A true hero: Duke the German Shepherd stepped in to defend his owner Gino Wensel from an armed robber, and was brutally attacked with a knife 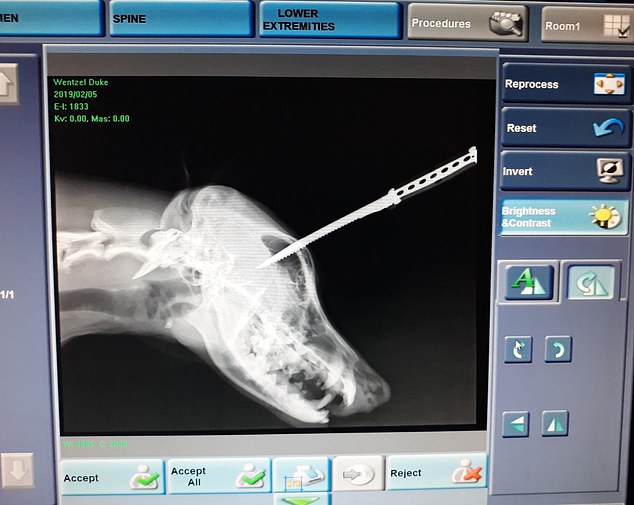 Shocking: An X-ray shows how deep the knife had been plunged into the dog’s head 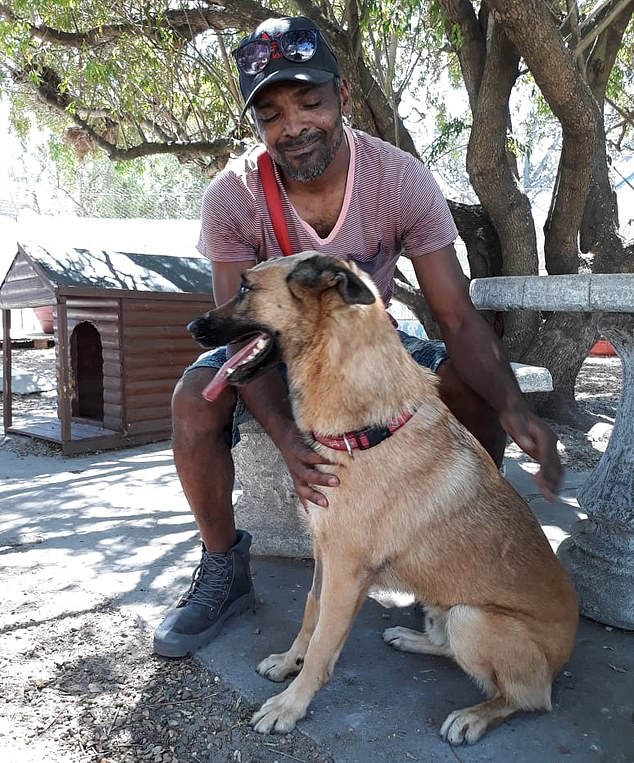 My saviour: Duke likely saved Mr Wensel’s life, and the pair had an emotional reunion once brave dog had come out of surgery

Despite the blade lodged in his head, the fearless dog went for the attacker, and managed to scare him off before collapsing in a heap with blood pouring from the head wound.

The cowardly attack happened in the Mitchell Plains area just outside Cape Town.

AWSSA spokesman Allan Perrins said: ‘Duke had suffered a very high impact blow that I have no doubt was intended to kill him and was in a critical condition and was close to death.

‘He was slipping in and out of consciousness and he was immediately sedated and given pain relief while we carried out an X-ray as we feared the blade was in Duke’s brain. 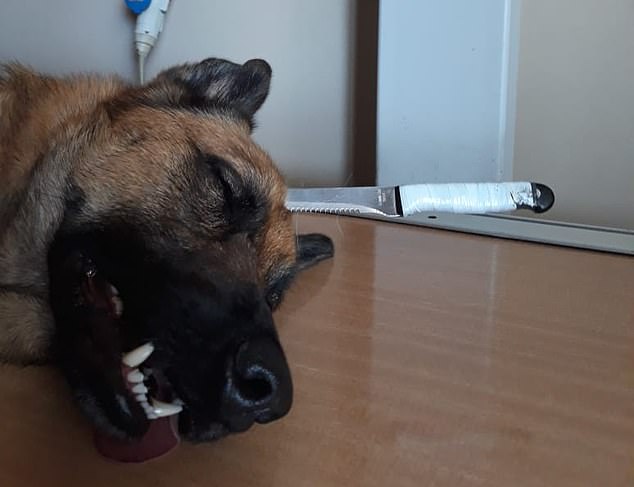 Brave: Even after the attacked had stabbed him in the head, Duke still chased him off before collapsing in the street 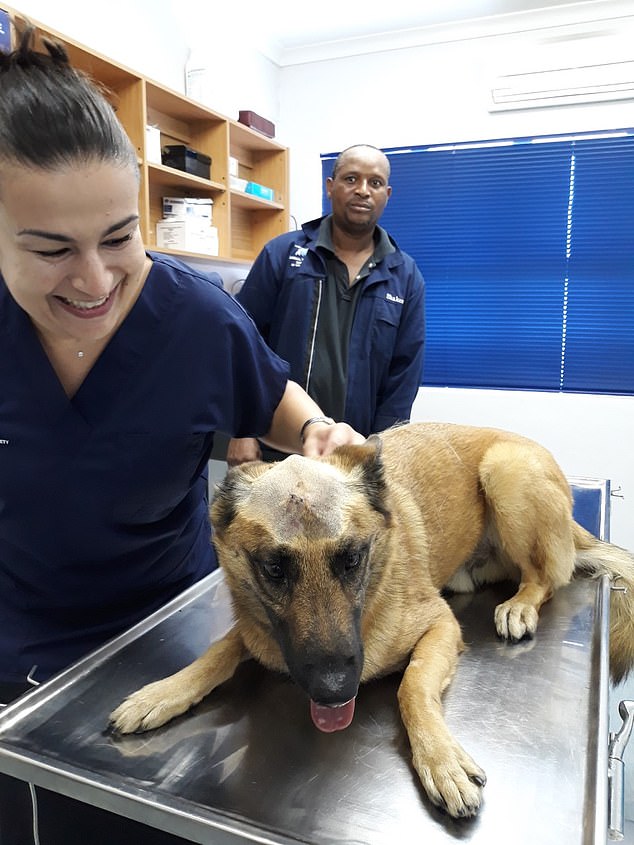 Back at it! Duke the dog wakes following the successful surgery where the knife was removed 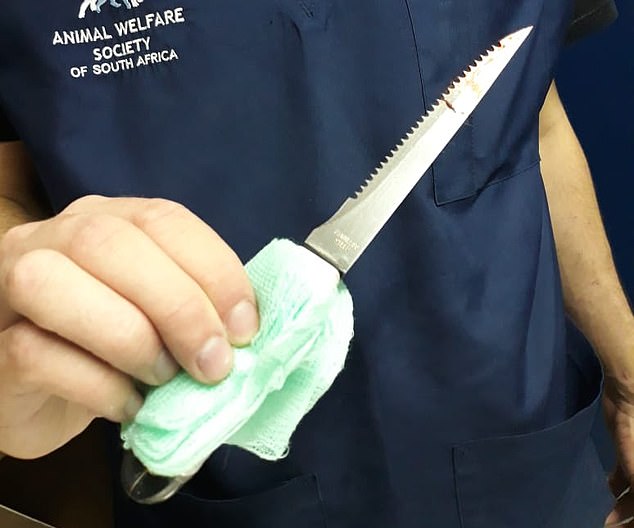 Weapon: An animal clinic staff member holds up the serrated steak knife after it has been removed from the dog’s skull

‘The X-ray showed however that the blade had gone in three inches but had bent on entry away from the brain missing it by millimetres and turned towards his right eye socket.

‘A fraction harder and Duke would have died but our vet Dr Zheneta Stoynova operated immediately and extricated the blade safely and then stitched up the deep wound.

‘Incredibly Duke has recovered overnight and his owner came back for him today and the fuss they made over each other gives all of us the reward we need for what we do here.

‘The guy who stabbed Duke in my opinion wanted to rob Gino and when Duke defended his master he stabbed him very hard and tried to kill him but Duke saw him off’ he said.

Mr Wensel said: ‘I have no doubt this man was trying to kill my dog. There are very bad men and gangsters round here. Whether he was trying to rob me or attack me I will never know. 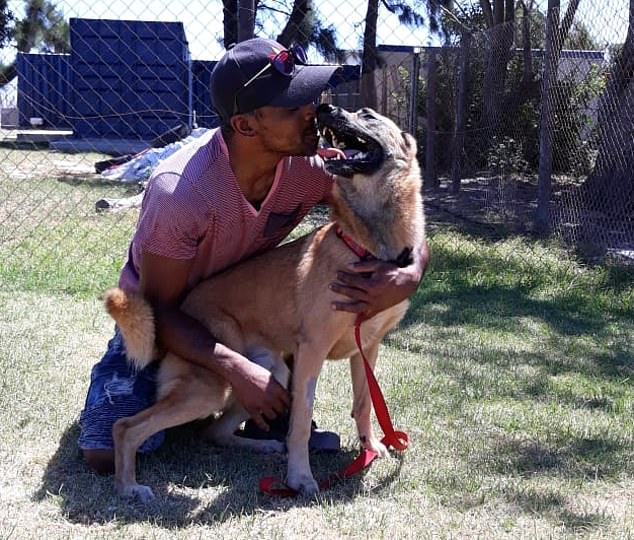 Best friends: The two pals were overjoyed to see each other again once Duke had recovered 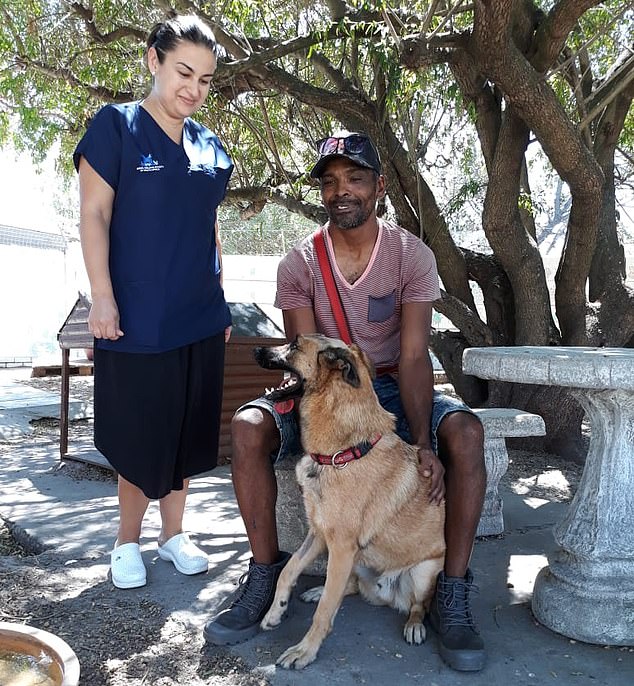 Two saviours: Duke’s life was saved thanks to the skills of the vet, pictured, at the Animal Welfare Society of South Africa (AWSSA)

‘What I do know is Duke was never going to allow anyone to cause me any harm. I thought he was dead. It was only the knife moving in his head that showed me he was just alive.

‘This man probably wanted to rob me but my dog nearly lost his life protecting me’ he said.

Mr Perrins said: ‘We rely entirely on donations from generous members of the public to help and save animals for poorer people who do not have the money to pay for help.

‘Gino is unemployed and has little money so we didn’t charge. He came in today with Duke’s lunch box which had his name on it and you can tell the dog is so looked after.

‘He may have very little money but what he gets he spends on Duke and their bond is so special and to be able to save Duke and give him back to Gino was just wonderful’ he said.