Hezbollah leader Hassan Nasrallah labelled America ‘the Great Satan’ in a speech Sunday, as he vowed revenge for Qassem Soleimani’s death and cited The Washington Post’s criticism of Donald Trump.

The Lebanese secretary-general called the president ‘the biggest liar in America’s history’ a week after saying all US bases, all warships and every single soldier in the region is now a target.

The last known images of Iranian general Qassem Soleimani before he was blown up in a US drone strike show him hugging and praying with Nasrallah in Beirut.

And Nasrallah said Sunday: ‘America, the Great Satan, is responsible for Israel and all its crimes against the Palestinian people’

‘America built ISIS to destroy our countries, our cultures, history, and our future. Every ISIS bombing against a mosque or church, it must be called “Made in USA.” We must never forget this, that America is our true enemy.’

He also said: ‘I direct people to look at the @washingtonpost caricature on the missile strike.’

It was not clear which cartoons Nasrallah was referring to but a number of the paper’s drawings appear to criticize Trump’s actions in the region. 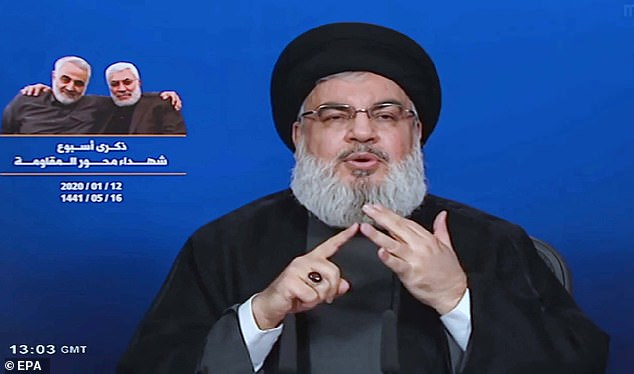 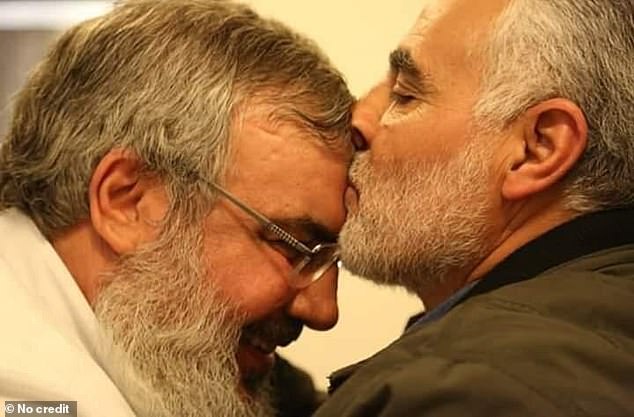 Nasrallah added: ‘The American leadership said in days after Soleimani’s death the world was a safer place. They will discover in blood that they were wrong.

‘The Americans should get their army out of our region—and the alternative to them leaving vertically is leaving horizontally [in coffins].’

As the head of the Iranian Revolutionary Guards’ Quds Force, Soleimani oversaw Tehran’s interventions in regional power struggles from Lebanon and Iraq to Syria and Yemen.

Hezbollah’s influential head Sunday: ‘Every country and people in the region must thank Soleimani and Abu Mahdi al-Muhandis for defeating ISIS, because in their battle they protected the entire region’s peoples. Lebanon and other countries.’

He added: ‘@realDonaldTrump is lying that Soleimani was planning attacks on US embassies. This is not true at all, and Trump is the biggest liar in America’s history.’ 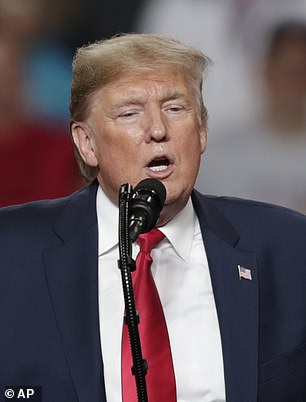 The comments were Nasrallah’s second since Soleimani’s killing.

Calling the killing an ‘ugly American crime’ Nasrallah said: ‘Soleimani’s funeral constituted a second Islamic revolution in Iran, and I think it put the Americans and others who are betting on internal Iranian dissent in great despair.’

Hezbollah is the only side not to have disarmed after Lebanon’s 1975-1990 civil war.

The United States has designated it a ‘terrorist’ group and several of its figures are under sanctions, but the party is also a key player in Lebanese politics.

Thousands gathered in front of the gate of the Amirkabir University of Technology near the former US embassy in Tehran over the weekend to protest the government and Iran’s Supreme Leader Ayatollah Ali Khamenei for mistakenly downing a civilian passenger plane.

‘More importantly, the USA is watching. Turn your internet back on and let reporters roam free! Stop the killing of your great Iranian people!’ 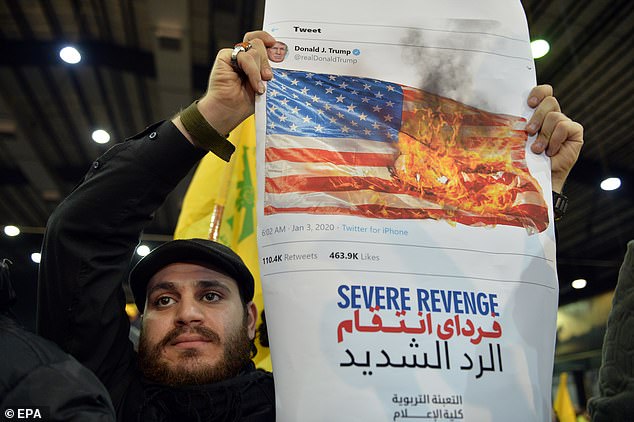 A supporter of Hezbollah carries a placard during a mass rally to pay tribute to the Iranian Revolutionary Guards Corps (IRGC) Lieutenant general and commander of the Quds Force Qasem Soleimani in the southern suburb of Beirut, Lebanon on January 5 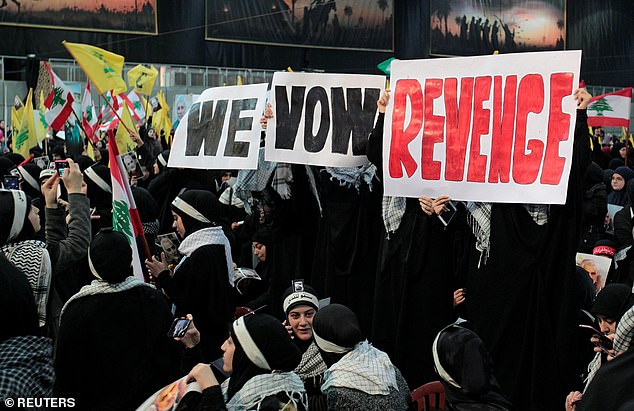 Lebanon’s Hezbollah supporters attend a funeral ceremony rally in Beirut’s suburbs, Lebanon to mourn Qassem Soleimani, who was killed in an air strike at Baghdad airport

The plane crash early on Wednesday killed all 176 people on board, mostly Iranians and Iranian-Canadians.

Iran’s top Guards commander briefed parliament on Sunday, a day after the armed forces said the Ukrainian airliner was shot down in error in an admission that sparked an angry demonstration.

After initially blaming a technical failure, authorities finally admitted to accidentally shooting it down in the face of mounting evidence and accusations by western leaders.