HGV driver is jailed after his own lorry cameras capture him on his phone for 38 MINUTES, reading at the wheel, cutting across lanes, speeding and tailgating during terrifying M1 journey

A lorry driver who was caught breaking several driving laws on a dangerous six-hour journey up the M1 has been jailed for 14 months.

At one point, HGV driver Dmitrijus Jakimcovas spent 38 minutes on his mobile phone during a prolonged spell of dangerous driving on the M1 between junction 2, on the outskirts of London, to junction 22 at Markfield.

He also tail-gated and undertook other motorists, cut across lanes, drove in the fast lane, broke the speed limit and even read paperwork on the motorway drive.

Drivers and passengers on the M1 were so worried about his driving that they telephoned the company number on his lorry.

Shocking footage of the reckless behaviour was recorded on an in-cab camera installed over the right-hand side of the driver’s seat.

His bosses at Graphic Packaging International in Bardon viewed footage from his cab and called in the police.

Leicester Crown Court was shown 20 of 38 footage clips showing him on his mobile phone, tailgating and flashing his headlights at drivers and undertaking a line of traffic by driving down a slip road then across the chevrons and hard shoulder and back into lane one.

The majority of the footage, which were from a cameras around his 44-tonne truck, showed agency driver Jakimcovas travelling along the busy M1 on October 24, 2017. 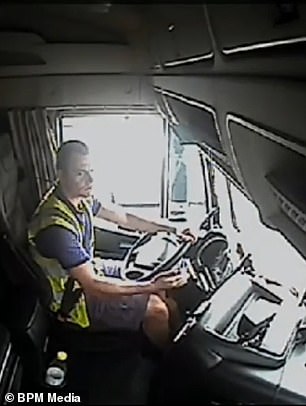 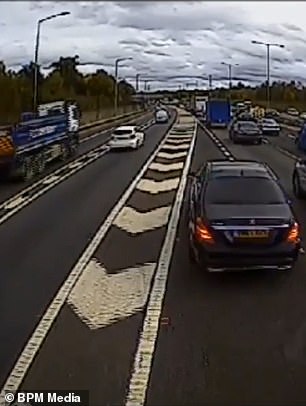 Prosecutor Priya Bakshi told the court how the 30-year-old Lithuanian was reported by other people in vehicles on the M1.

She said: ‘Worried people on the motorway reported him to his employers because of the manner of his driving.

‘He was using the third lane unlawfully on a number of occasions.

‘At one point the extensive footage showed him on his mobile phone for 38 minutes without a break.

‘It was on a highly-congested road just after 2pm. 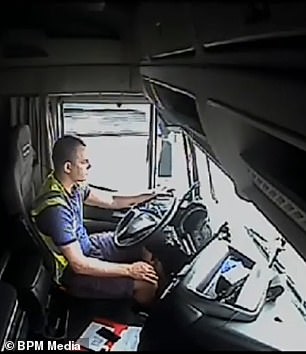 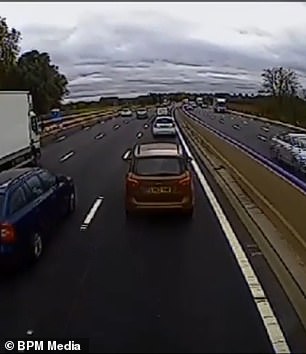 Jakimcovas, of Stretton Road, off King Richards Road, Leicester, pleaded not guilty to dangerous driving but was convicted at Leicester Magistrates’ Court in June 17

Jakimcovas, of Stretton Road, off King Richards Road, Leicester, pleaded not guilty to dangerous driving but was convicted at Leicester Magistrates’ Court in June 17.

Robert Lassey, defending, said that his client had been on his phone for 38 minutes because he had received a call from his ex-wife telling him his son was ill.

He said: ‘I am forced to say that this series of offences do not make for comfortable viewing.

‘Some of the time he was on his mobile phone was due to the fact that his ex-wife called him to tell him that their son was very poorly.

‘He chose to take that call while he was driving. It does not excuse being on his mobile phone but does perhaps go a way to explain some of it.

‘In effect his mind was elsewhere.’

Mr Lassey said Jakimcovas had come to the UK in 2008 and had been an agency driver for five years. He had been of previous good character up until October 2017. 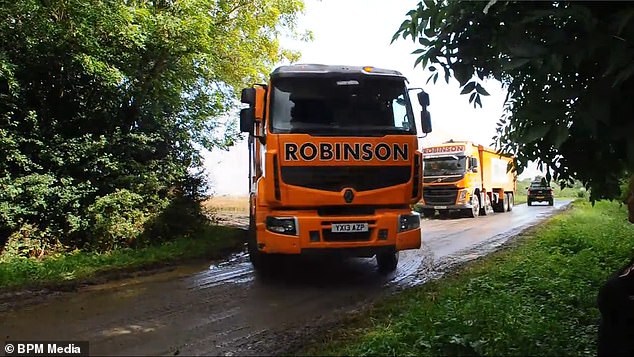 The judge sent Jakimcovas to jail for 14 months. He banned him from driving for two years and seven months because of the ‘very serious nature of this offence’

But, the court heard that since the day of the dangerous driving offence, he had other road traffic convictions.

In March 2018, he was convicted at Leicester Magistrates’ Court of driving without due care and attention and failing to stop.

On December 2018 he was convicted at the same court of using a fraudulent registration document and no insurance.

He was banned from driving for six months.

Judge Timothy Spencer QC said: ‘All in all, this is one of the worst instances of dangerous driving I have ever had the misfortune to watch and this took place over more than six hours.

‘It is only by sheer luck that no actual damage and no actual injury was caused.

‘You stand before me in this court because you elected trial in the magistrates’ court and they found against you.

‘How on earth you thought you could defend a charge of dangerous driving beggars belief.

‘You showed scant regard for the obligations of driving on the road and for the safety of other road users.

‘You were driving this lorry, 44 tonnes of it.

‘There is particular obligation when driving such a vehicle to observe the rules of the road, to pay respect to other road users and not to put others road users in danger.

‘You flaunted that time and time again.

‘Today I have to give you a sentence of immediate custody. If I did not, I would be failing in my duty in light of the very serious nature of this offence.’

The judge sent Jakimcovas to jail for 14 months. He banned him from driving for two years and seven months.

The Crown Prosecution Service released clips of Jakimcovas’s driving which had been shown in Leicester Crown Court.

Andrew Baxter, deputy chief crown prosecutor for CPS East Midlands, said: ‘This was a prolonged piece of dangerous driving where the defendant seemed oblivious to the obvious danger his actions posed to other road users.

‘In viewing the video taken in the cab, you can see there is limited concentration, inappropriate use of lanes and overtaking regular use of a mobile phone and a casual and aggressive manner displayed in his driving.

‘It is extremely fortunate that nobody was hurt as a result of this driving.’