Fetch! Hilarious moment a golden retriever films the inside of its own mouth when it steals a GoPro from its owner

This is the hilarious moment a dog filmed the inside of its own mouth when it stole a GoPro from its owner.

The footage, filmed somewhere in the UK, captured the playful pup as it relaxed in the garden with its owner.

The young boy was spending the day fixing up his bright red bicycle – and is seen letting the air out of a tyre before proceeding to replace it. 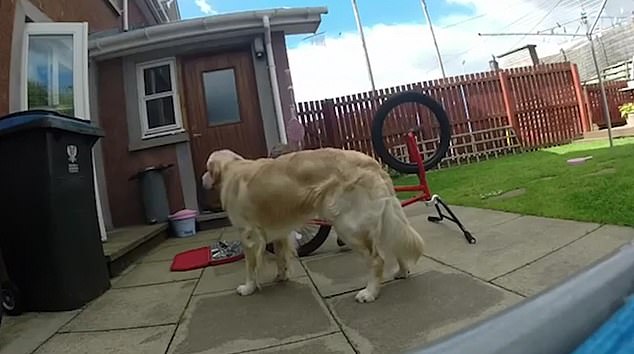 The footage, filmed somewhere in the UK, captures the playful pup as it watches its owner fix his bright red bicycle

But his dog had no interest in the scene before it, and loitered around as it waited for attention.

It soon gives up – heading back inside the house as the boy continued to work on his bicycle.

The determined pup, however, is soon back in the garden – chomping on a pink plastic swingball racket it found on the ground.

The retriever even rolled onto his back, waving its paws joyfully in the air as it continued to play with its new toy.

But then, losing interest in the racket, the cheeky dog spotted something better – a GoPro camera set up across the garden. 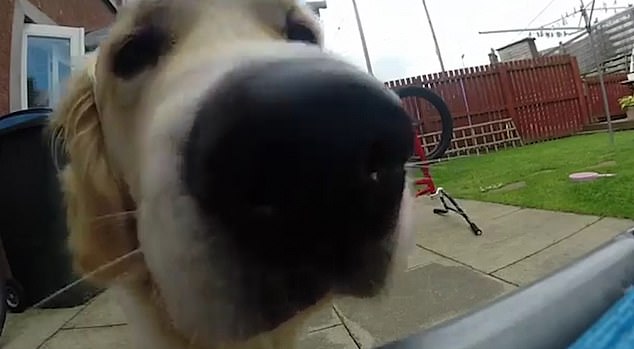 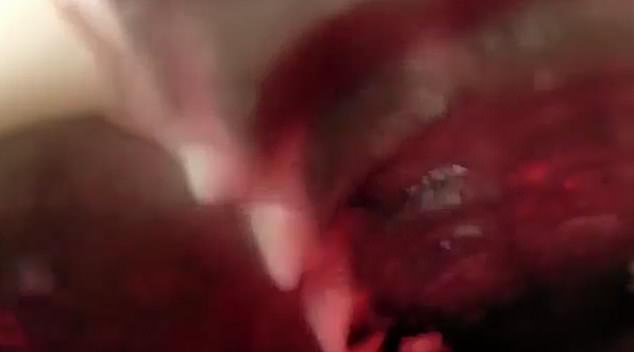 The golden retriever then picks up the camera with its mouth, filming the inside of its mouth which flashes red due to a light on the device

It ambled up to the camera, sniffing at the lens for a moment before picking it up with its teeth.

The GoPro then twisted to film the inside of its mouth – the dog’s teeth glowing as a red light on the camera flashed.

But the theft only lasted a few moments, and its owner can be heard yelling ‘give me it!’ through the muffle of the dog’s mouth.

The boy soon retrieved his camera, quickly wiping the lens clean before placing it on the ground.