Fury as homophobic donor withdraws her $7,600 donation to cancer-stricken 18-month-old toddler after realizing the girl’s parents are lesbians

A homophobic donor withdrew her $7,600 donation destined to deliver life saving treatment to a 18-month-old with cancer after learning that her parents are two women.

Tiffany and Albree Shaffer, 26, were in the hospital waiting for yet more results of little Callie’s treatment when they received a hateful Facebook message informing them of the donor’s change of heart earlier this month.

The couple were devastated learn the would-be donor had backed out of giving them $7,600 to cover the 18-month-old’s medical bills after discovering they were in a same sex relationship. 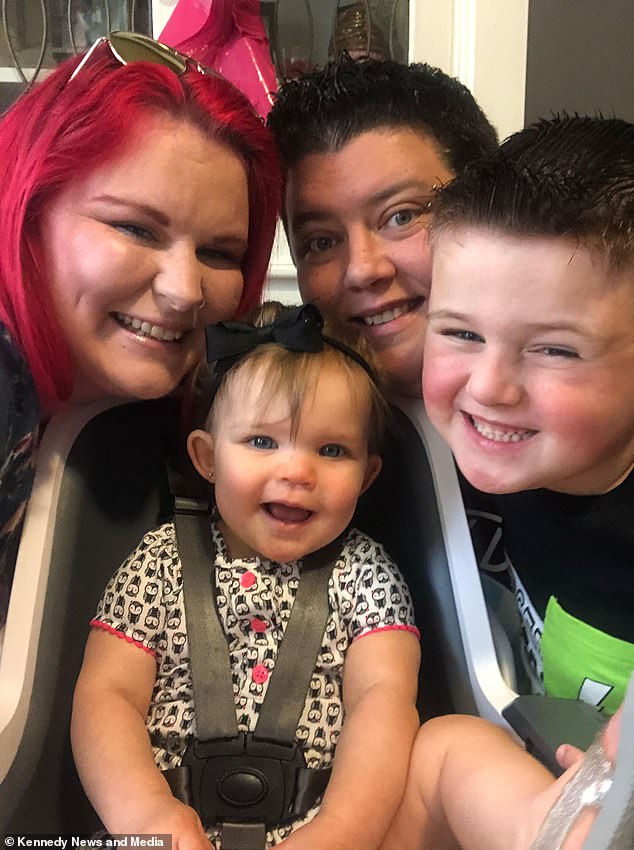 18-month-old Callie Shaffer (centre) with her family; brother Tyler, seven, and parents Tiffany and Albree (left) Shaffer, 26. A $7,600 donation towards the care of Callie was removed after the donor found her parents were a same sex couple

However in a heart-warming twist, another benefactor named Aaron Jackson, 37, offered to match the required sum after being dismayed at the blatant homophobia.

Charity worker Aaron felt compelled to step in after claiming to have had a donor refuse to back his charity when they discovered they advocated LGBT rights.

Now Albree, from Cincinnati, Ohio, US, who quit her childcare business to care for Callie, says the generous donation will mean they have the time to focus on battling their daughter’s neuroblastoma. 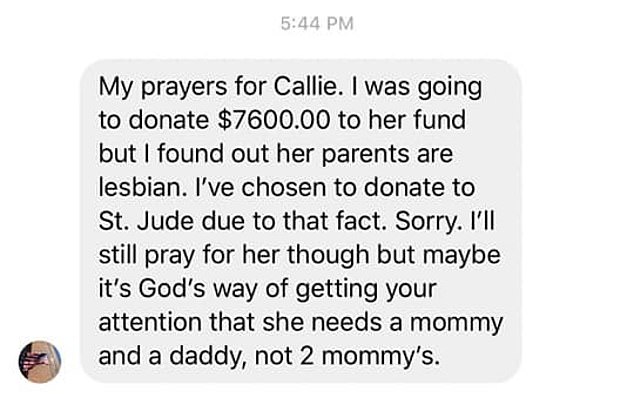 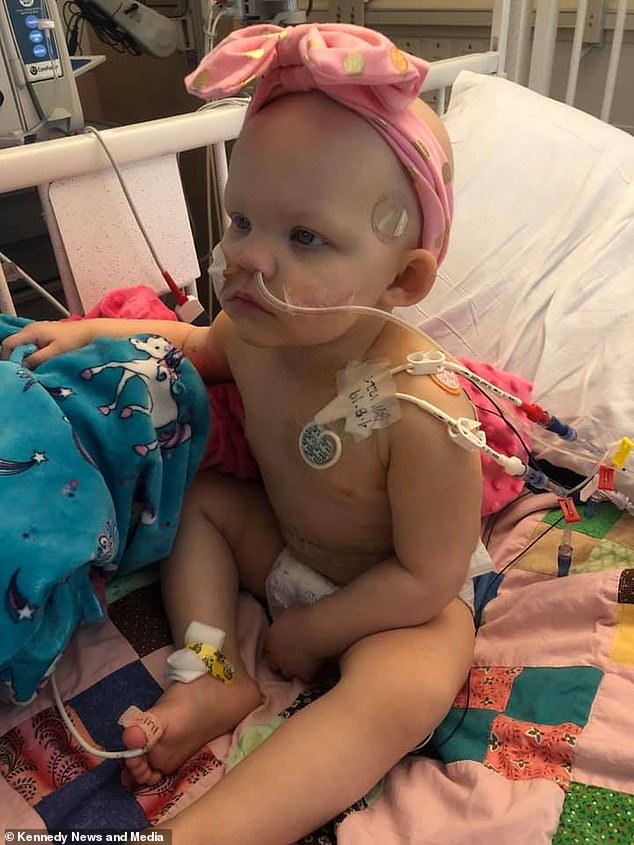 Callie Shaffer receives treatment for stage four cancer in hospital. Callie was diagnosed with stage 4 neuroblastoma, on January 8 and is deemed high risk because the advanced and aggressive cancer has metastasized to her bones

Now Albree, who quit her childcare business to care for Callie, says the generous donation will mean they have the time to focus on battling their daughter’s neuroblastoma.

‘Sorry. I’ll still pray for her though but maybe it’s God’s way of getting your attention that she need’s a mommy and a daddy, not 2 mommy’s.’

However upon hearing about it, Aaron contacted them and said: ‘I heard that you lost 7,600 because you two are lesbians.

‘Well, I’m giving you $7,600 because you are wonderful parents that are fighting for your child.’

Albree said: ‘We were already scared and stressed out and then we received that disgusting message. 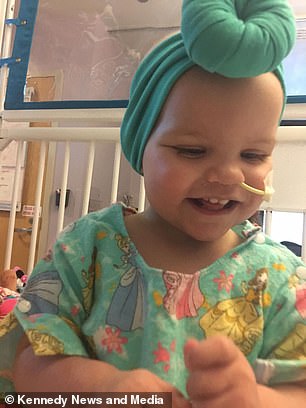 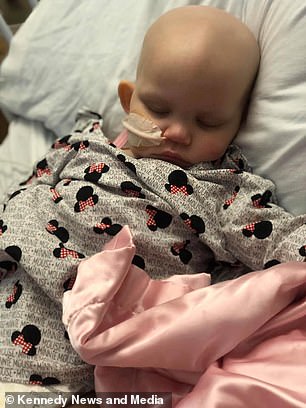 Callie only began showing symptoms of illness back in December last year when the toddler stopped eating, drinking and wanted to be held all the time 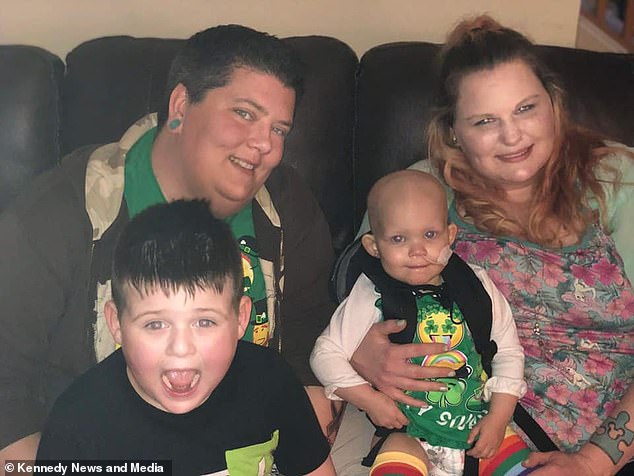 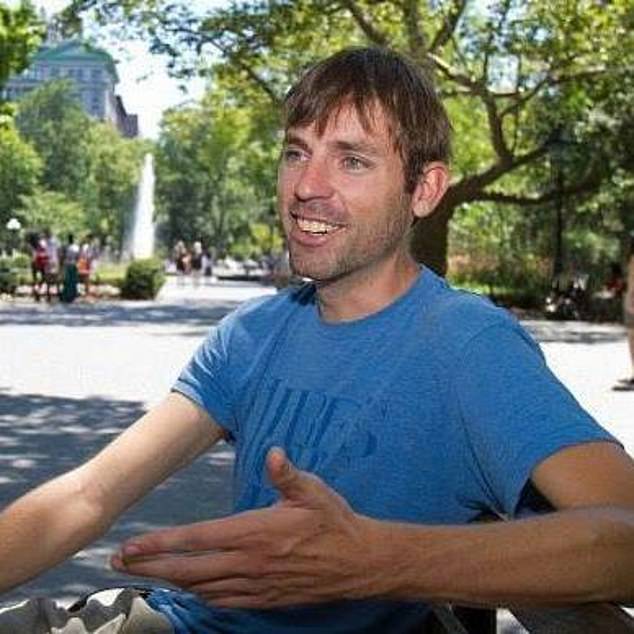 Aaron Jackson, 37, was the kind donor who stepped in to help the family and fund the tot’s cancer treatment after being appalled by the homophobic donor

‘First we were shocked then disgusted.

‘How can someone write something like that when we’re already so down?

‘We didn’t reply and haven’t heard from her since, but we’ve heard from others that she’s since deleted her page.

‘We’re still shocked [that Aaron said he would donate so much]. I cried when I found out.’

‘It was confusing because we weren’t sure it was legit but he said ‘we deserved it’.

‘We do believe that maybe that woman [who withdrew her donation] should have an education class, because people can be afraid of what they don’t have the knowledge of. It doesn’t matter who cares for the child.

‘I would say thank you to that woman now, because she’s [inadvertently] brought so much awareness for Callie’s story.’ 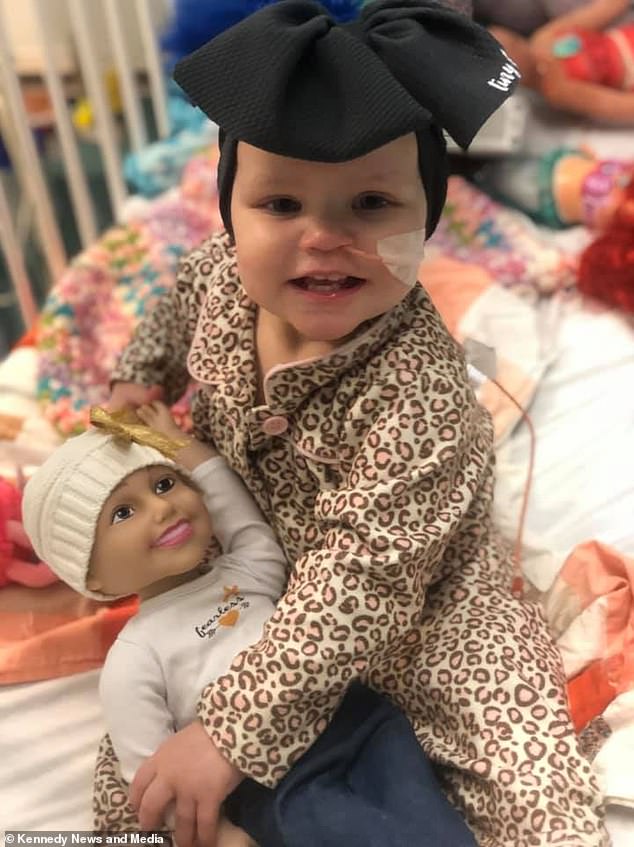 Callie playing with her doll while in hospital. The adorable girl wears a bow hair band as she receives treatment in hospital

Aaron, who is president of non-profit humanitarian organisation Planting Peace and routinely helps at orphanages and crises across the globe, said experiencing something similar from a donor prompted him to step in.

Aaron, Destin, Florida, said: ‘When I heard Callie’s story, it really struck home for me on many levels.

‘A donor pulled their support of our orphanage when Planting Peace started advocating LGBT rights.

‘It’s truly unbelievable to think about the similarities between the two situations.

‘You have children going through horrific situations, they are vulnerable and need love and support.

‘How anyone could put their issues with the LGBT community ahead of a child’s life is heartbreaking.

‘Not five minutes after learning that Callie lost the donation, I gave the full amount.

‘Soon after, Planting Peace launched a fundraiser and now we have $10,000 for little Callie.

‘My goal was to raise money to replace what she took away, but also to make sure that Callie knows there are many more people who love her in this world than those who feel the way that this one person felt.’ 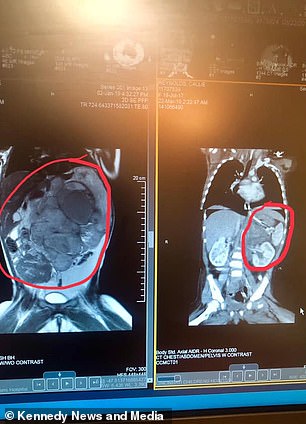 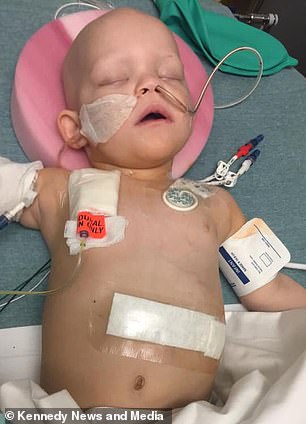 After an x-ray showed a very large mass in Callie’s abdomen biopsies were ordered. They got the devastating results that the cancer had spread the following day, coinciding with the day the couple went to court to finalize their legal adoption of Callie

Callie was diagnosed with stage 4 neuroblastoma, on January 8 and is deemed high risk because the advanced and aggressive cancer has metastasized to her bones.

However she only began showing symptoms of illness back in December last year.

‘We’d put her in her playroom but she would just lie there. She just wanted to be constantly held and would cry unless we were holding her.

‘She was very lethargic and just wanted to be cuddled all the time.

‘This went on for about two weeks where it got to the point she wasn’t drinking or eating at all.

‘We took her to the doctors who said she wasn’t worried because she wasn’t dehydrated and she sent us home.’

Tiffany, 36, and Albree took her for a second opinion where she was sent home with a ten-day course of antibiotics for an upper respiratory infection and the start of an ear infection.

After no sign of improvement they reached out to a nursing friend and were advised to take her to the Emergency Room.

Albree said: ‘So on January 1 we took her in and that’s about the time we started to realise she was starting to become very bloated, which was odd. 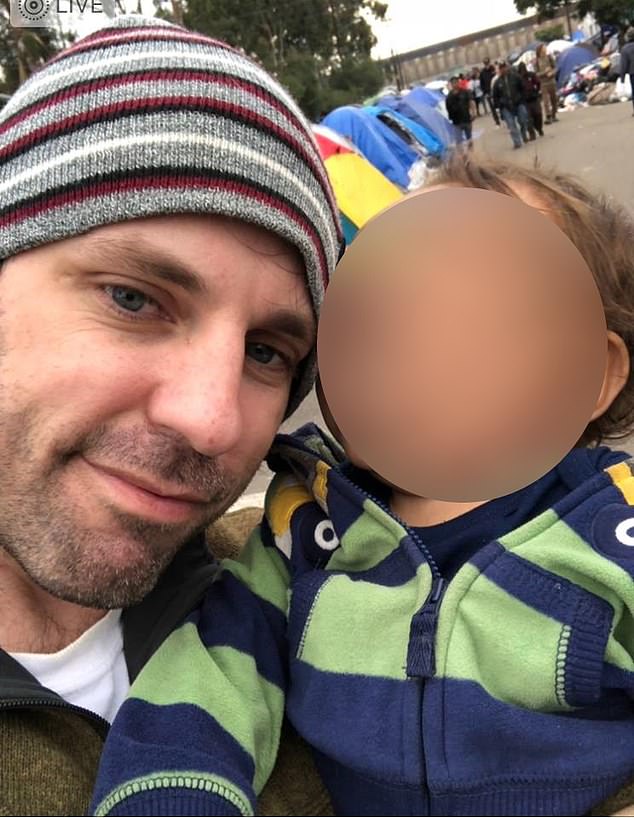 Aaron Jackson helping at an orphanage. Mr Jackson is president of non-profit humanitarian organisation Planting Peace and routinely helps at orphanages and crises across the globe, said experiencing something similar from a donor prompted him to step in 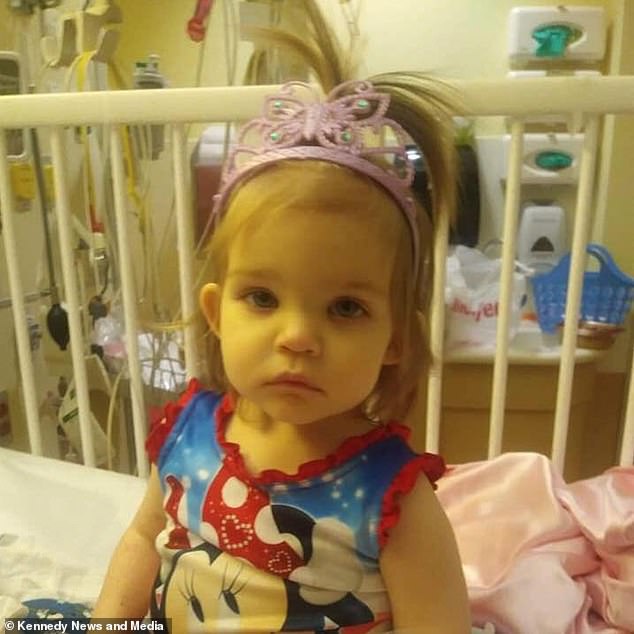 ‘Normally that’s how we could tell she had been eating but, because she hadn’t, that’s when the doctors become very concerned, especially when we told them about her other symptoms.

‘After checking her breathing she was sent her for an x-ray. That’s when they sat us down and told us this wasn’t good.

‘It showed a very large mass in her abdomen and he told us he was pretty sure it was neuroblastoma.

‘We didn’t know what that was and he didn’t really want to say too much to us, without a biopsy, and being sure, so we Googled it and did our own research.’

The family were rushed to Cincinnati Children’s Hospital and were kept there for several days.

Following a series of scans, Callie finally had a biopsy done on January 7.

They got the results the following day, coinciding with the day the couple went to court to finalise their legal adoption of Callie.

When they returned to the hospital they were told the devastating results of the biopsy. 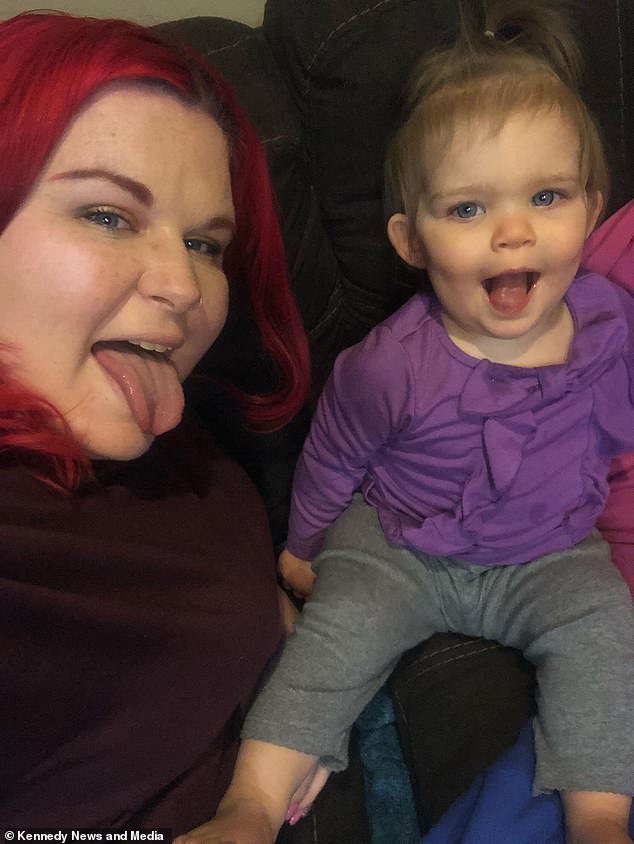 Callie Shaffer sticks her tongue out with mother Albree in cute pose. Albree says her daughter is too young to know what is going on but missed her brother while in hospital

Albree said: ‘They said it had spread, more than the size of the tumour. It showed that she had 12 spots, or 12 lesions in her bones.

‘She had to start chemotherapy straight away and then were told that this would mean that Callie would have little chance of being fertile.

‘We were rushed into making the decision to harvest an ovary and insurance didn’t cover this cost but this was a little something that we definitely wanted to do for her.

‘We wanted to give her a little power back and a choice to be a parent when she’s older.

‘The support and money that we have had from everyone gives us more time and more attention to be able to focus on Callie and getting her better.’ 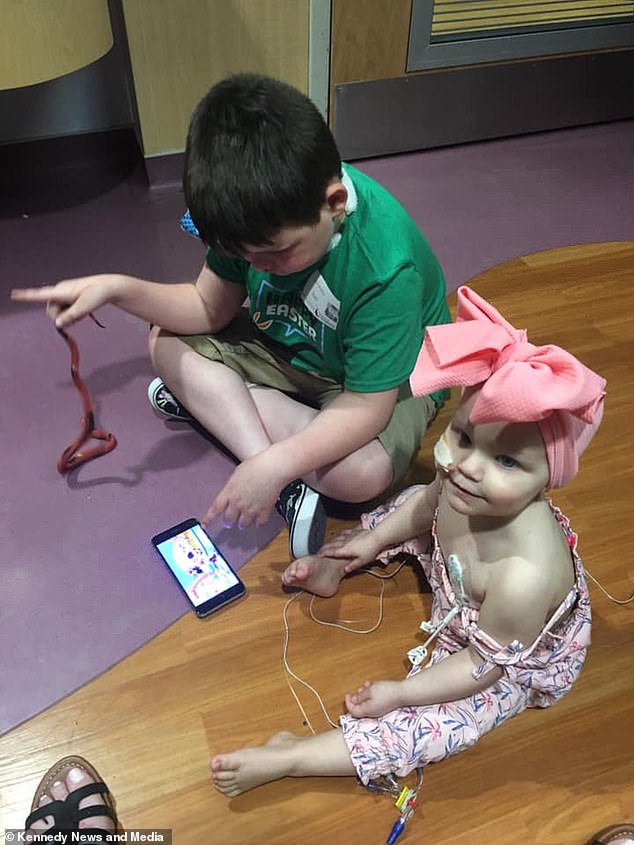 Callie is on her sixth session of chemotherapy treatment. The different cycles vary in length and they use different types of medication

Albree gave up work to be able to support Callie full-time while she receives treatment.

Tiffany still works at a day care facility for adults with development delays and disabilities and the pair have another son, Tyler, 7.

Albree said: ‘Tyler misses his sister and we miss her just running around at home.

‘She’s too young to be really aware of what’s going on but she loves and missed her brother.’

‘Callie is on her sixth session of chemotherapy treatment. The different cycles vary in length and they use different types of medication. 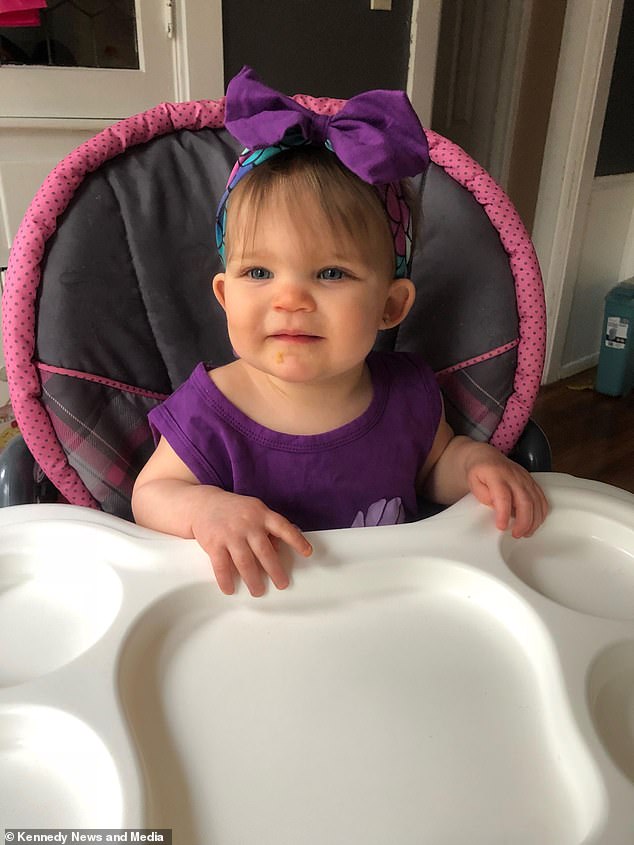 Little Callie before being diagnosed with the stage four cancer. Her parents thank all those who have donated towards her treatment

‘Cycle one was five days and she was pretty ok with that one but cycle three was three days and that one was really rough. She had a lot of vomiting, got really sick.

‘She’s 14 days into this one now but we don’t know what going to happen.

‘We’re waiting for Callie to have stem cell taken from her bone marrow and be put back into her body.

‘We were told to take it one day at a time and that’s what I focus on. In order to stay positive, I stay in the moment on what we’ve got to do right now.

‘Tiffany’s sister had shared what was going on with Callie online, and particularly because of how she came about she is just so special to our friends and family.

‘Everyone was so upset and distraught that they just started sharing the story of them and we got a lot of support from people that we didn’t even know.

‘We’ve never had any other abuse [outside of the homophobic would-be donor]; we’ve just had great, great support.

‘And to those people who have helped and donated and supported us, I just can’t find enough words to express our gratitude, and say how thankful we really are.’