Hong Kong: Hundreds of legal professionals dressed in black joined a silent march in Hong Kong on Thursday to protest proposed amendments to an extradition law that critics say would erode the territory's independent legal system.

The lawyers and other legal workers marched from the Court of Final Appeal to the central government offices. 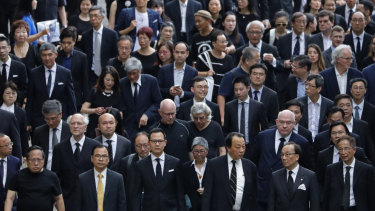 Hundreds of legal professionals wear black to express their disappointment as they participate in a silent march to protest against the extradition bill in Hong Kong.Credit:AP

March organizer Dennis Kwok said the bill would cause "irreparable damage to our legal system, to the rule of law."

The amendments have been widely criticised as eroding the semi-autonomous Chinese territory's judicial independence by making it easier to send criminal suspects to mainland China, where they could face vague national security charges and unfair trials.

Under its "one country, two systems" framework, Hong Kong was guaranteed the right to retain its own social, legal and political systems for 50 years following its handover from British to Chinese rule in 1997. However, China's ruling Communist Party has been seen as increasingly reneging on that agreement by forcing through unpopular legal changes.