The latest protests surpassed all the earlier shows of dissent for scale and intensity, escalating after Hong Kong’s Beijing-backed leader warned that the city is on the verge of an “extremely dangerous situation” and represented a challenge to China’s sovereignty.

What started several months ago as demonstrations over an extradition bill that would have allowed people to be sent to mainland China for trial have now evolved into a much broader backlash against the city’s government and its political masters in Beijing.

As some train and bus services resumed, tens of thousands of demonstrators fanned out across several districts, and there were running battles with riot police as some activists besieged police stations.

Thousands of black-clad protesters later occupied roads in Admiralty district near government buildings for several hours before moving to other areas. By nightfall, protests continued across the city.

Earlier, speaking to the media for the first time in two weeks, Beijing-backed leader Carrie Lam remained defiant as she rejected calls from protesters demanding her resignation, saying the government would be resolute in maintaining law and order.

She warned that the protests were putting the former British colony on a path of no return and had hurt its economy.

“They claim they want a revolution and to restore Hong Kong. These actions have far exceeded their original political demands,” said a stern-faced Lam, flanked by senior members of her administration.

China’s Hong Kong and Macao Affairs Office of the State Council said it would hold a press conference on Tuesday at 2.30 pm (0630 GMT) to discuss the situation in the city.

The protests pose the greatest political challenge to the government of the former British colony since it returned to Chinese rule and represent the biggest popular challenge to Chinese leader Xi Jinping since he came to power in 2012.

“These illegal acts that challenge our country’s sovereignty, and jeopardize ‘one country two systems’, will destroy the stability and prosperity of Hong Kong,” Lam said, referring to the territory’s administrative system since 1997, when it was handed back to China.

Some demonstrators accused Lam of again fuelling the crisis by ignoring public sentiment, however, and pledged to continue their movement.

It was “totally a waste of time” to hear her speak, said Jay Leung, 20, a university student.

“I don’t think the government is doing anything to heal society,” he added. “They provide no solution to solve the political problem brought on by themselves.”

Russell, 38, who works in the tourism industry said, “Nothing, she said nothing. I didn’t hear anything positive, she just made it worse.”

Within hours of the comments, protesters hurled umbrellas and other items at police in the residential district of Wong Tai Sin, where officers responded with pepper spray. Police also fired tear gas in Tin Shui Wai district, as tension flared.

Commuters struggled to get to work in the rush hour before Lam spoke, with many rail and bus services suspended by activists who blocked trains from leaving stations, some by sitting in doorways, in the latest anti-government campaign.

Long lines of traffic snaked across Hong Kong island into the heart of the business center and hundreds of people were stranded at the airport, where more than 200 flights were canceled at one point.

“(The government) are making police the scapegoat and creating a situation that is becoming unbearable for everyone who lives here. So that’s one of the reasons we have joined the strike,” said Mark Schmidt, 49, a restaurant manager who closed his business on Monday. 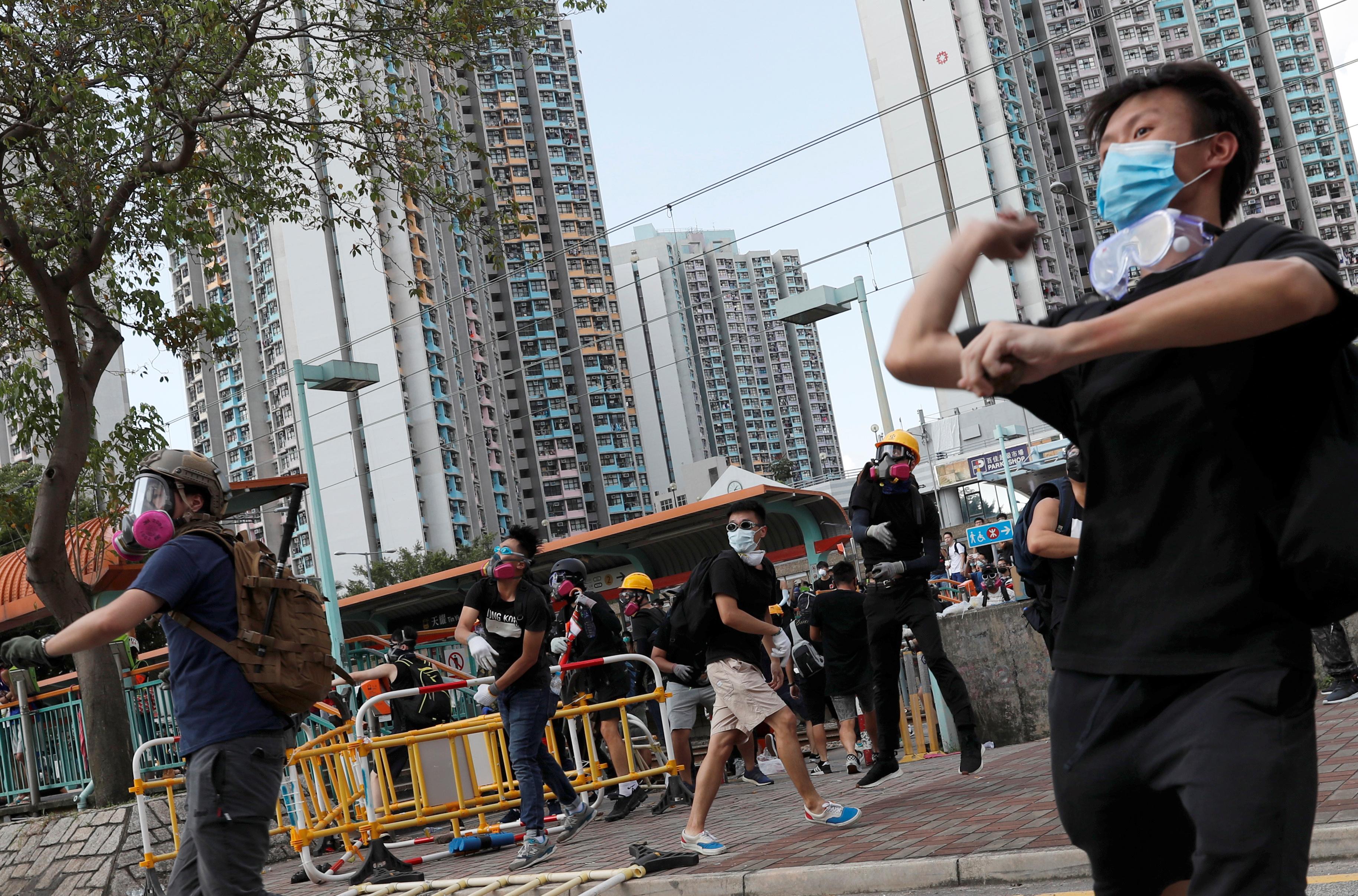 “Losing a bit of money now is not such a problem,(compared) with losing everything that the freedom of Hong Kong used to stand for,” he added.

Lam’s speech focused mainly on the violence at recent protests, which have galvanized people to join rallies by civil servants, teachers, lawyers and religious groups, among others.

In an upmarket shopping mall in Sha Tin, scores of shops were shuttered, including clothing retailer H&M as well as luxury brands Chanel and Dior.

Protesters in the shopping center chanted, “Strike! Support to the end.”

Many stores in the bustling shopping district of Causeway Bay were closed as well as businesses close to the protests.

Members of the Hong Kong Disneyland Cast Members Union went on strike, as did many lifeguards, forcing authorities to close some beaches and swimming pools.

Demonstrators besieged police stations over the weekend in flash mob-style actions, spray-painting walls with graffiti and breaking windows. More than 40 people were arrested.

Police, who some have accused of using excessive force on protesters, said the violence was escalating rapidly and the situation was spiraling out of control.

Authorities said 420 people have been arrested over the protests since June 9, while police have fired 1,000 rounds of tear gas and about 160 rubber bullets.

The government has refused to accede to any of the protesters’ main demands, which include a complete withdrawal of the extradition bill and an independent inquiry into government handling of the crisis.

With tourist numbers falling and hotel occupancy rates slumping, the protests are piling pressure on a struggling economy. 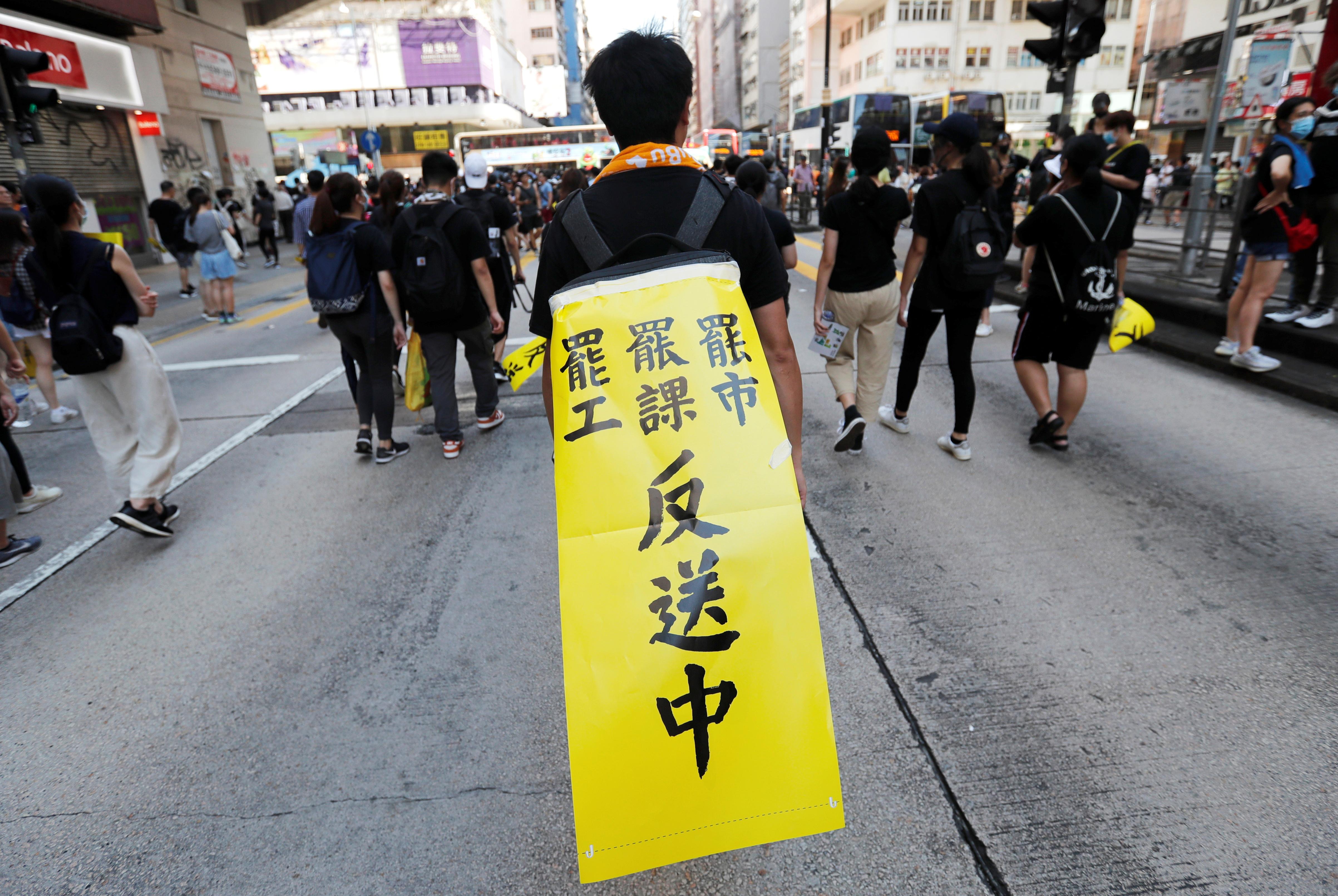 IHS Markit’s July Purchasing Managers’ Index for Hong Kong showed private sector business activity dropped to its lowest level in a decade, weighed down by the protests and the Sino-U.S. trade war.

“I would not be surprised if we see a technical recession – two consecutive quarters of contraction. That is highly probable now,” said Raymond Yeung, chief China economist at ANZ.

The benchmark Hang Seng Index closed down 2.9 percent, falling to its lowest level since January.