HONG KONG (Reuters) – Hong Kong protesters threw petrol bombs and police fired tear gas in street battles across the city on Tuesday, posing a direct challenge to Chinese President Xi Jinping on the 70th anniversary of the founding of the People’s Republic.

Police fired water cannon and tear gas to try to disperse protesters throwing petrol bombs outside central government offices in the Admiralty area of Hong Kong island and ordered the evacuation of the Legislative Council building, trashed by activists weeks ago, next door.

In the New Territories town of Sha Tin, police fired tear gas canisters directly at high-rise windows, though it was not clear why, as the Chinese-ruled city was gripped by the most widespread violence in nearly four months of unrest.

Police said “rioters” had used corrosive fluid in Tuen Mun in the west of the New Territories, “injuring multiple police officers and reporters”. No details were immediately available.

The Chinese-ruled territory has been tense for weeks, with protests often turning violent, as authorities scramble to avoid activists spoiling Beijing’s birthday parade at a time when the central government is already grappling with a U.S.-China trade war and a slowing economy.

Peaceful protests descended into chaos with police firing volleys of tear gas outside a famous Taoist temple in the residential district of Wong Tai Sin. At least eight motor-cycles were torched.

Nearly four months of street clashes and demonstrations have plunged the former British colony into its biggest political crisis in decades and pose the gravest popular challenge to President Xi since he came to power.

Thousands of black-clad protesters, some wearing Guy Fawkes masks, marched from Causeway Bay toward government headquarters in Admiralty, defying a ban on a rally and setting up the likelihood of clashes with police.

Rail operator MTR Corp shut down its whole metro system to stop protesters moving around. Shutting stations has made it a common target for attack, with several of its stations trashed over recent weeks.

Protesters had vowed to seize the opportunity on China’s National Day to propel their calls for greater democracy onto the international stage, hijacking an occasion Beijing sees as an opportunity to showcase China’s economic and military progress.

Demonstrators blocked roads across the territory in frantic game of cat-and-mouse with police, piling pressure on already stretched security resources.

“I’m not young, but if we don’t march now, we’ll never have the chance to speak to again, it’s as simple as that,” said one marcher near Causeway Bay, a 42-year-old woman with her own logistics company who identified herself as Li.

Police said they arrested five people, aged between 17 and 25, in the central district of Wan Chai late on Monday after finding them with walkie-talkies, lighters and material for petrol bombs, including 18 liters (4.75 gallons) of fuel and empty bottles.

Hundreds of officials and members of the pro-establishment elite began the day with a flag-raising ceremony and National Day reception at the Convention and Exhibition Centre, held early and moved behind closed doors. Roads to the center were closed and tightly policed.

Hong Kong has benefited from China’s support under the “one country, two systems” policy, Acting Chief Executive Matthew Cheung told the assembly, referring to guarantees of political freedoms after the city’s handover from British to Chinese rule in 1997.

However, he said escalating violence was disrupting social order and hurting the economy. 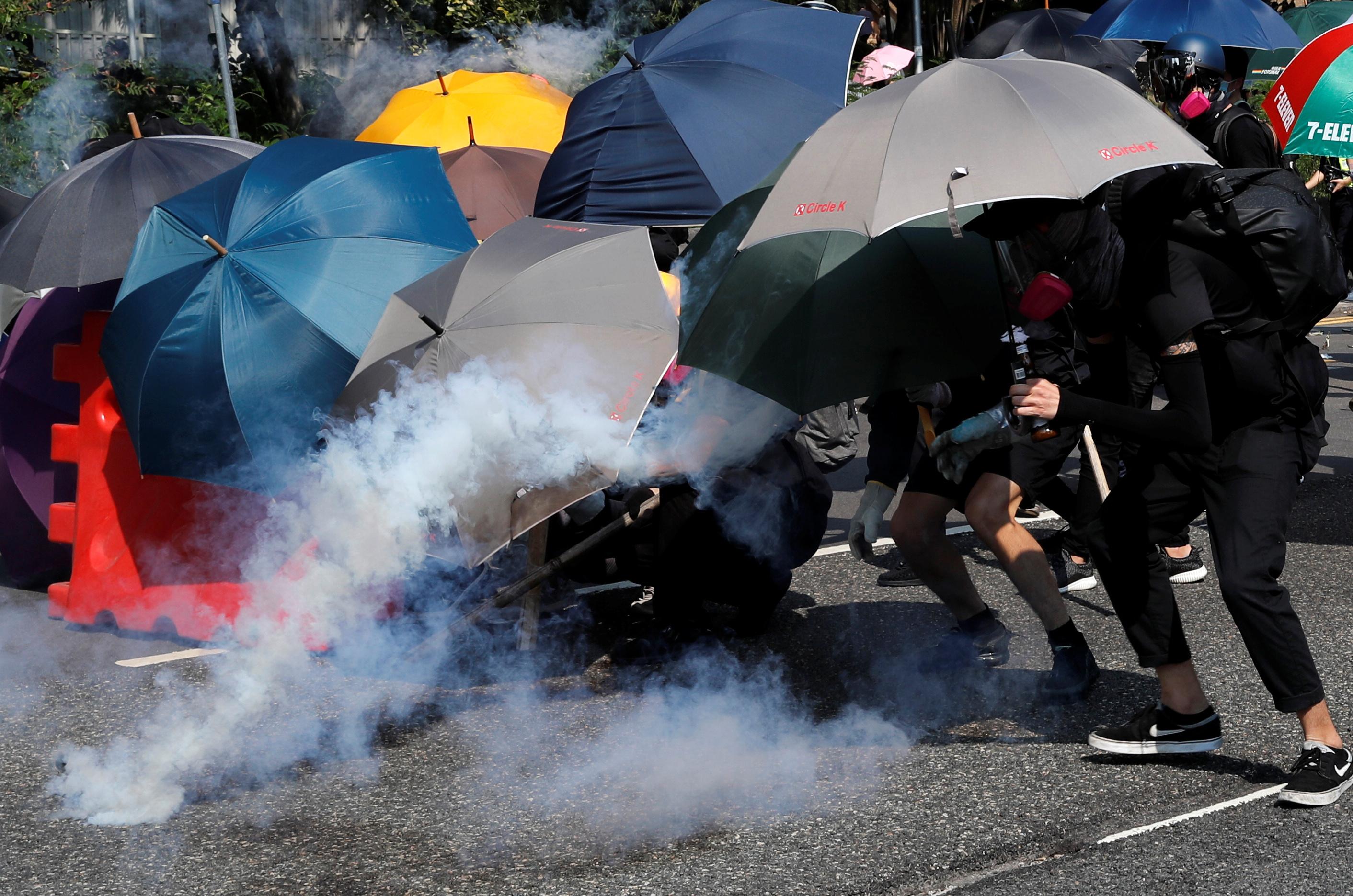 The IFC mall, one of the city’s largest upscale shopping centers, was closed on Tuesday, depriving retailers of sales in what would normally be a busy shopping week when mainland tour groups traditionally flood in for the annual Golden Week holiday.

Visitor arrivals dropped 39% in August from a year earlier, with the number of mainland tourists to Hong Kong dropping 42.3% over the period, according to the latest data.

A group of protesters outside the venue shouted “No national day celebrations, only national day mourning”, and called for those arrested during recent clashes to be released. Police fired pepper spray during a scuffle outside a nearby train station.

Lam, who was trapped in a stadium for hours last week after attending the “open dialogue”, left for Beijing on Monday to celebrate China’s birthday on the mainland. She will return on Tuesday.

Lam was shown on television smiling as a float celebrating Hong Kong went past as she sat with Chinese officials.

The Communist Party leadership is determined to project an image of national strength and unity in the face of challenges including Hong Kong’s unrest, slowing economic growth and a trade war with the United States.

“On our journey forward, we must uphold the principles of peaceful reunification and one country, two systems; maintain lasting prosperity and stability in Hong Kong and Macau … and continue to strive for the motherland’s complete reunification,” Xi said in his nationally televised speech in Beijing.

Hong Kong protesters are angry about what they see as creeping Chinese interference in the Asian financial center.

China dismisses the accusation and has accused foreign governments, including the United States and Britain, of fanning anti-China sentiment. 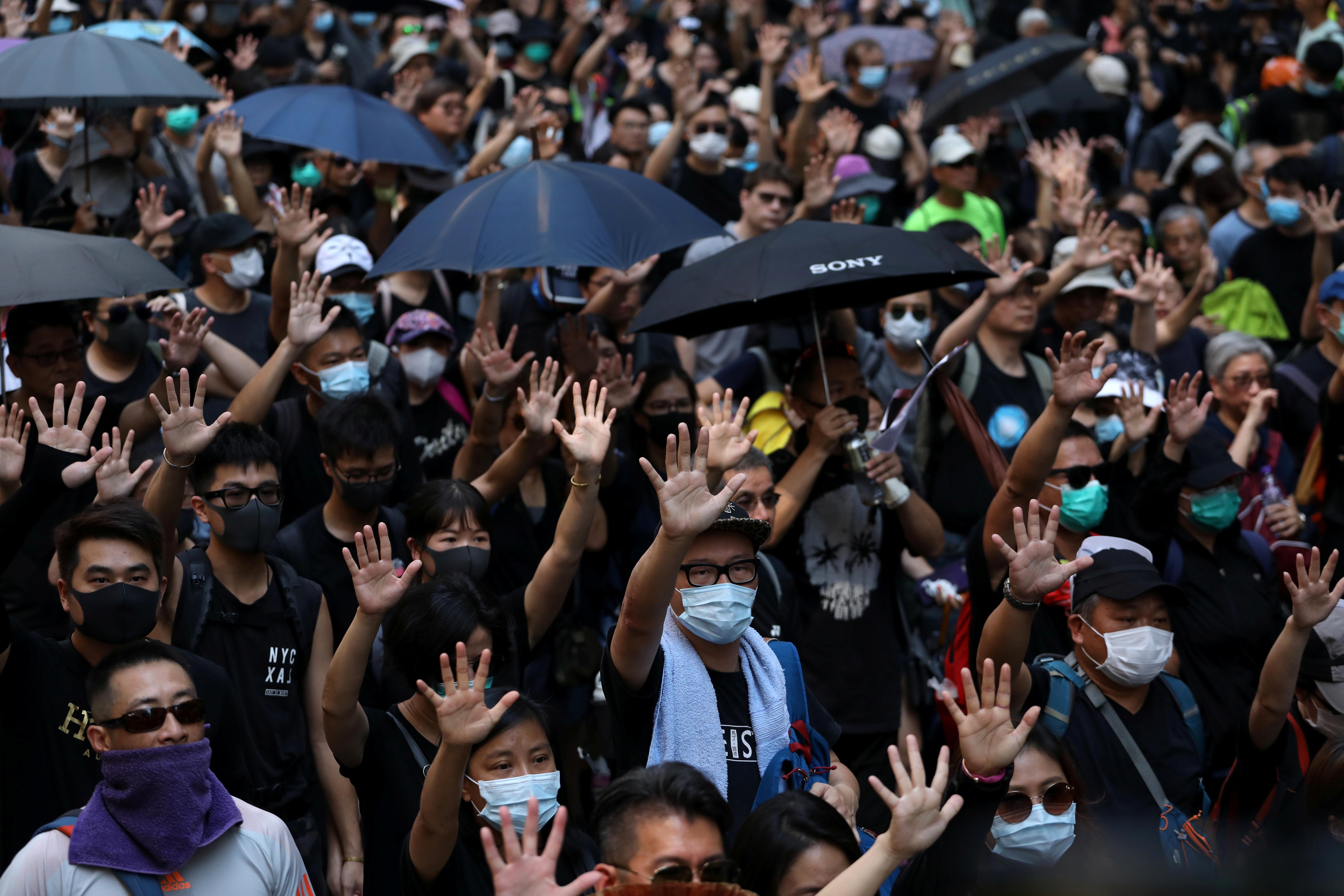 Last month, Beijing moved thousands of troops across the border into the city. The Xinhua state news agency described the movement as routine rotation.

Asian and Western envoys in Hong Kong, however, have said the absence of any evidence that troops had been withdrawn suggested it was a reinforcement, with the largest-ever regular army force now stationed in the city.