HONG KONG (Reuters) – Hong Kong police staged a show of force on Monday night in a district hit by some of the most violent clashes with protesters in recent months, but instead of being confronted by demonstrators were jeered by onlookers.

Many Hong Kongers say police have used excessive force against protesters – some of them school students and young adults – and want an independent inquiry into police action.

“The police are ridiculous, they are out of control,” said a 22-year-old man watching the police who gave his name only as James. “We are sticking to our beliefs and trying to express our voices to the government, but they use force to try to make us afraid and try to make us stay at home.”

Police arrived in vans at several locations in the Mong Kok district and marched down the street, some beating shields, but were outnumbered by media and onlookers and withdrew to cheers.

In one incident, a few dozen riot police retreated and drove off as about 150 residents and passers-by heckled them, chanting “disband police” and “Hong Kongers revolt”.

Police fired tear gas and used pepper spray on people in some locations and detained a handful of people in the working class district across the harbor from the financial center that has been a focal point of past demonstrations.

A handful of protesters played a cat-and-mouse game with police but there were no major confrontations by late Monday night.

Police said “masked rioters” had damaged public property and facilities in metro stations and were guilty of arson.

“The police strongly condemn the life-threatening and violent acts of rioters. Appallingly, some onlookers even clapped their hands to incite the rioters,” the police said. Late on Monday most police had withdrawn from Mong Kok streets.

Four months of protests have plunged the former British colony into its worst political crisis in decades and pose the biggest popular challenge to Chinese President Xi Jinping since he came to power in 2012.

Hundreds of protesters gathered in Hong Kong shopping malls during the day demanding “freedom”, but street protests failed to materialize in any significant size as the city struggled to recover from violent clashes in recent days.

Tens of thousands of protesters, many families with children, marched peacefully through the center of Hong Kong on Sunday, most wearing face masks in defiance of the threat of a maximum one-year prison sentence for doing so. Those rallies later descended into violent clashes with police.

The introduction of colonial-era emergency powers banning face masks, which protesters use to hide their identity, has sparked some of the most violent clashes in four months of demonstrations.

“The idea that with public order policing you send police forces out with live ammunition is preposterous,” said Patten, who presided over the handover of Hong Kong to China in 1997. 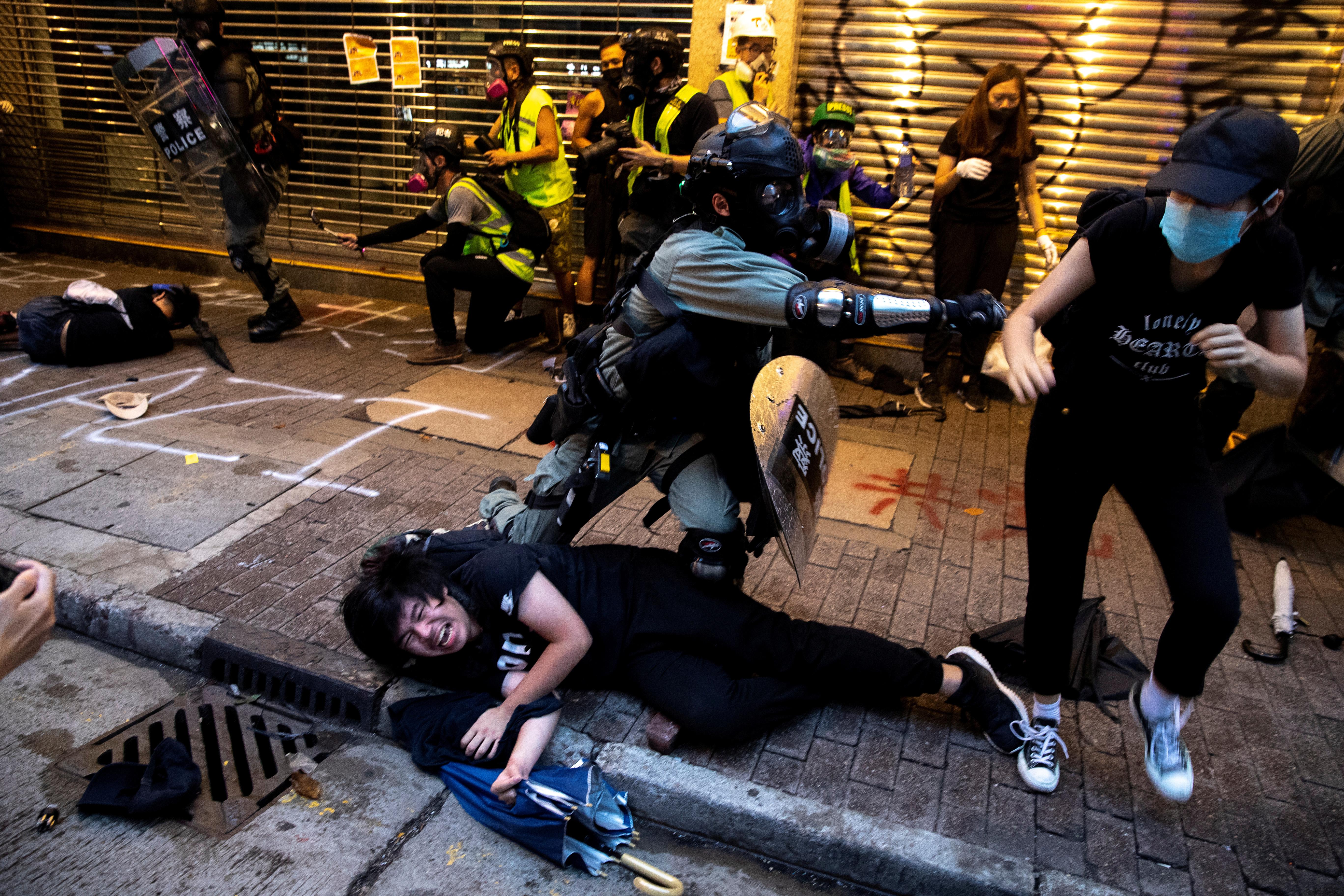 Two protesters have been shot, one in the chest and one in the leg. Authorities said the shootings were not intentional but occurred during skirmishes between police and protesters.

Many protesters, police and journalists have been injured in clashes, with police using rubber bullets, tear gas and water cannons against demonstrators, some of whom throw bricks and petrol bombs.

On Monday, Hong Kong’s metro rail system, which typically carries about 5 million passengers a day, was only partially operating after what authorities said was “serious vandalism” on Sunday night. Some stations were torched in the protests.

Many shops and Chinese banks were also extensively damaged.

About one-tenth of ATMs were vandalized and cash refills may be delayed in some areas due to public events or security concerns, said the Hong Kong Association of Banks (HKAB).

The Sunday night protests, the second night of violence since the imposition of emergency laws, saw scores of protesters arrested and the first warning from Chinese military personnel stationed in the territory.

What started as opposition to a now-withdrawn extradition bill has grown into a pro-democracy movement against what is seen as Beijing’s increasing grip on the city, which protesters say undermines a “one country, two systems” status promised when Hong Kong returned to Chinese rule. 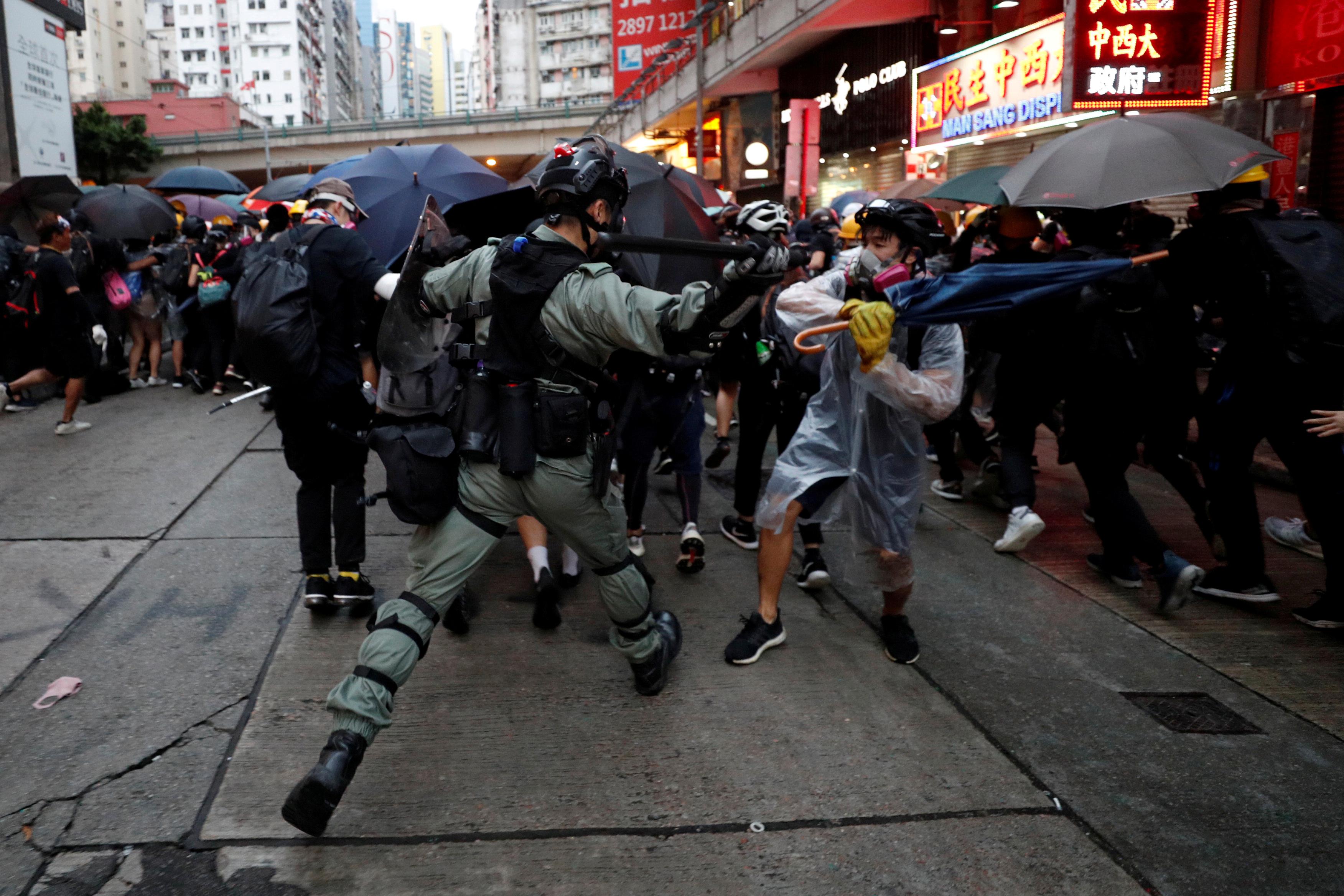 China’s Hong Kong military garrison warned protesters on Sunday they could be arrested for targeting its barracks with lasers – the first direct interaction between the People’s Liberation Army and protesters.

Hong Kong is facing its first recession in a decade with the protests damaging tourism and retail sectors.

Protesters have been using the encrypted Telegram social media messaging system to co-ordinate their actions. On Monday, a member of Hong Kong’s Executive Council declined to rule of internet restrictions to curb demonstrations.