Hong Kong authorities has formally banned a political party promoting independence from China – the first such ban since Britain handed its former colony back to Chinese rule in 1997.

The local government claims the Hong Kong National Party had spread ‘hatred and discrimination’ against mainland Chinese, and had been prepared to use force to achieve its goal of independence.

Banning the organisation is the latest attempt by Beijing to silence a small, but vocal, movement demanding democratic reforms in Hong Kong. 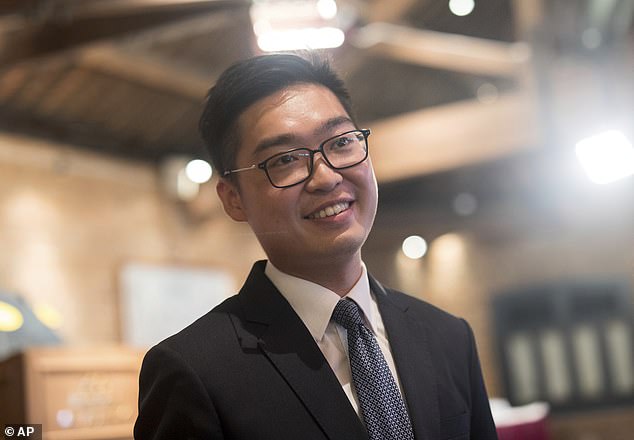 Banned: The Hong Kong government claims Andy Chan’s party spread ‘hatred and discrimination’ against mainland Chinese, and would to use force to achieve independence

The city’s Secretary for Security John Lee announced the ban on the Hong Kong National Party in a brief statement published in the government’s gazette, ten days after the party submitted arguments against the move.

Lee ordered the ban under Hong Kong’s Societies Ordinance, a previously little noticed colonial-era law that requires all social groups and organisations to register with the police.

The law allows the government to ban groups ‘in the interests of national security, public order or the protection of the rights and freedoms of others’.

Lee later told reporters that Hong Kong National Party was prepared to use ‘all methods’ to forge independence, which posed a threat to national security and broke the Basic Law, the mini-constitution that governs Hong Kong’s relations with China.

‘It has a clear agenda in making Hong Kong a republic,’ Lee said, adding that the group had spread ‘hatred and discrimination against mainland Chinese’.

The authorities could not rule out action against other groups, including those promoting ‘self determination’ as well as full independence, he said.

China’s perceived tightening grip over the city has stoked tensions in recent years, including the ‘Occupy Central’ movement in 2014 that blocked major roads for nearly three months in a failed bid to pressure Beijing to allow full democracy.

More recent efforts to find ways of cracking down on the independence movement follows a warning last year from President Xi Jinping during a visit to the city that any attempt to endanger China’s sovereignty crossed a ‘red line’. 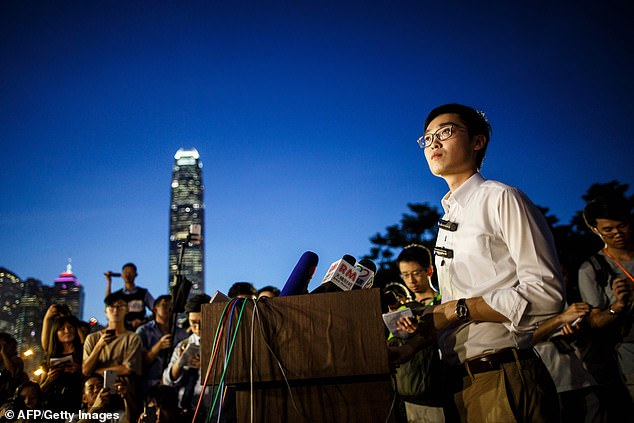 Continuing the fight:  Mr Chan, pictured speaking during a rally in 2016, said he would never stop fight for ‘freedom, human rights, equality and dignity’

Hong Kong’s nascent independence movement shows little sign of generating widespread public support but the government’s move in July to announce it was considering a ban on the Hong Kong National Party propelled its leader, Andy Chan, to prominence.

Hong Kong is governed under a ‘one country, two systems’ principle which allows the global financial hub a high degree of autonomy and freedoms not enjoyed in China, including an independent legal system and freedoms of speech and assembly.

The 28-year-old Chan has been widely quoted in local and international media in recent weeks. In August, he spoke at Hong Kong’s Foreign Correspondent’s Club, a move condemned by the Chinese Foreign Ministry and locally-based Chinese officials.

‘I will never stop in my pursuit of freedom, human rights, equality and dignity,’ Chan told Reuters earlier.

He could not be reached for comment on Monday, while some media reports said he was considering a legal appeal.

The central government supported the Hong Kong authorities in punishing any acts that jeopardised national security and had zero tolerance for any organisations preaching Hong Kong independence or engaging in activities of splitting the country, Xinhua quoted the spokesperson as saying.