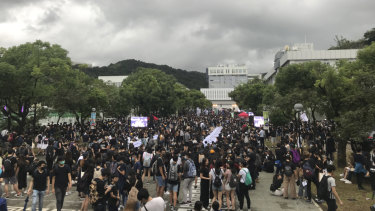 University strike begins with a rally at the Chinese University of Hong Kong.Credit:Kirsty Needham

Any hopes that Hong Kong’s summer of protests may wind down as university classes begin and students return to studies appeared to have been quashed by the large turnout to a combined universities rally at the Chinese University of Hong Kong.

Activists distributed fresh supplies of gas masks and goggles to those wanting them.

Standing with a banner for Hong Kong University’s law society, James said he and other law students told their lecturers they were striking. The lecturers offered to videotape the classes for them.

Another student, Eunice, said: “We won’t stop learning, but this will be two weeks of strikes and we hope the government will listen.” 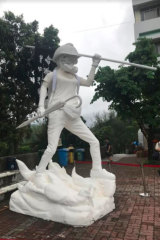 Statue of pro-democracy protester at the Chinese University of Hong Kong.Credit:Kirsty Needham

Star, a medicine student at Hong Kong University, said his lecturer was sympathetic and had replied that the students should “stay safe”.

A large portion of the Year One orientation camp from the City University of Hong Kong arrived in matching orientation t-shirts.

Judy, 18, said: “Our vice chancellor of the university doesn’t support us and is angry at us. But I think it is our freedom to do this.”

She said she is unconcerned at any action Beijing may take if the protests continue.

“It’s already unsafe in Hong Kong. The police are just beating us and are even attacking the citizens.”

Many of the parents of her friends were unhappy they are protesting because they think it is “not safe for girls”, she said.

“I hide it from them. Some parents are worried about us, but some parents don’t think the extradition bill is serious enough to do this.”

Vanessa, a lecturer and alumni of the CUHK, cried when she saw how many thousands of students had come to the strike. “I am so impressed by them,” said Vanessa, who had also been at the airport blockade on Sunday. 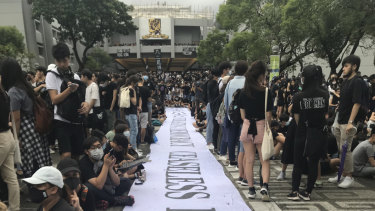 Tina, a mother of teenagers, said she came to support the students.

At a police press conference on Monday it was announced that 100 petrol bombs had been thrown over the weekend and 159 people were arrested.

But Tina said: “Violence can be accepted in a certain way – if it is violence against buildings and not humans. It can have a purpose to express their anger. More and more Hong Kong people can tolerate it, compared to five years ago.The so-called radical actions have a purpose.”

Tolerance of radical tactics by the protesters had risen from 70 per cent in June to 90 per cent in August, according to an ongoing survey of 8000 people at demonstrations by a group of Hong Kong university researchers.

Barrister and former Legislative Councillor Margaret Ng told rally-goers on Monday that she was happy with the actions of frontline protesters which were a process of trial and error.

Large numbers of riot police took to the streets of Mongkok again on Monday night, where they arrested demonstrators and fired pepper spray. They dispersed protesters who had arrived at Prince Edward MTR station to lay flowers for those hurt in violence on Saturday night – when police ran through a train carriage with batons and pepper spray and made 40 arrests.

Police arrested Baptist University student leader Keith Fong in Mong Kok for alleged theft after police searched him and found he was carrying the wallet of another student.

The Baptist University student association said the student had left the wallet at the Chinese University of Hong Kong rally and Fong had found it and had arranged to return it.

Fong had been arrested last month for buying laser pointers at a shop.

Reuters reported on Monday evening that Carrie Lam had been secretly recorded telling business leaders she had caused “unforgivable havoc” in attempting to pass an extradition bill and would resign and make a “deep apology” if she had the choice.

She says she doesn’t think Beijing will send in troops and denies there is a deadline of October 1 for her government to solve the crisis before Beijing intervenes.