New York: A bitter divide over who is to blame for scores of Palestinian deaths from Israeli fire at protests near Gaza's border shifted Friday to the United Nations, where the United States vetoed a measure backed by Arab countries to protect Palestinians and condemn Israel.

Nikki Haley, the US ambassador to the United Nations, described the measure, a UN Security Council resolution drafted by Kuwait, as one-sided. She accused the measure's authours of inexplicably absolving Hamas, the militant group that controls the Gaza Strip and organised the protests. 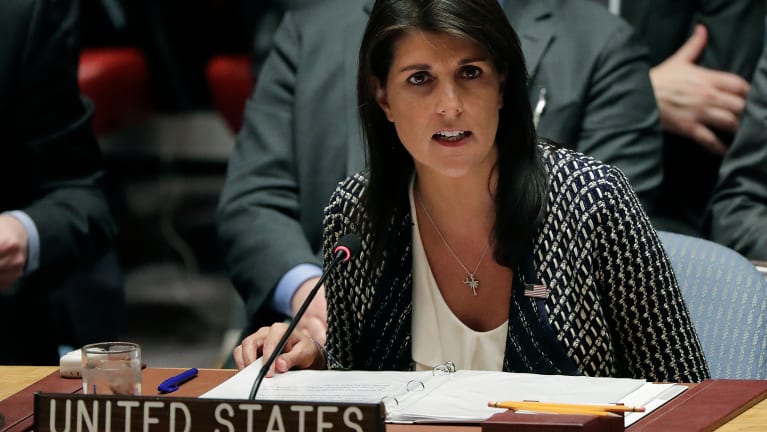 Nikki Haley, US ambassador to the United Nations, says no further proof is needed that the UN is ‘hopelessly biased’ against Israel.

The United States, a permanent Security Council member with veto power, was the sole no vote on the measure, which was enough to defeat it. Ten members voted in favour and four abstained.

A separate American resolution proposed by Haley, which would have condemned Hamas for the Gaza violence, failed to gain any support from fellow council members.

"Further proof was not needed, but it is now completely clear that the UN is hopelessly biased against Israel," she said in a statement.

While the votes were largely symbolic, they offered some insight into the challenges the United States is facing diplomatically over what critics call its unbridled support of Israel's side in the protracted conflict with the Palestinians.

Kuwait's draft resolution condemned the use of "excessive, disproportionate and indiscriminate force by the Israeli forces against Palestinian civilians" and demanded a halt to such actions. It made no mention of Hamas, which Israel, the United States and several other countries consider a terrorist organisation.

In the vote for the American resolution, in which the United States was the sole yes vote, three members voted against it and 11 abstained.

A Security Council resolution requires a minimum of nine yes votes, with no vetoes by its permanent members, for passage.

About 120 Palestinians have been killed and hundreds wounded by Israeli forces along the fence that divides Israel from Gaza since the protests erupted at the end of March inside Gaza, an impoverished Mediterranean enclave where nearly 2 million Palestinians live.

A 21-year-old Palestinian nurse was killed Friday, the Gaza Health Ministry said. No Israelis have been killed during the protests.

Israel has contended that its military is acting lawfully to stop the protesters from breaching the fence, and it has rejected accusations that soldiers have used deadly force needlessly. The Israelis have also accused Hamas and its militant affiliates in Gaza of using the protests as cover for sending attackers into Israel.

The United States has backed Israel completely on the Gaza issue.

The resolution by Kuwait, the only Arab member of the Security Council, called for the "consideration of measures to guarantee the safety and protection" of Palestinian civilians in Gaza and the Israeli-occupied West Bank, and for a halt to "the use of any excessive, disproportionate and indiscriminate force" by the Israeli military.

Haley, an outspoken supporter of Israel at the United Nations, called the draft a "grossly one-sided approach" that did not acknowledge any responsibility by Palestinian militants for the violence.

The diplomatic jousting after the votes at the Security Council meeting displayed the yawning divide and dual narratives of the Israeli and Palestinian sides.

Riyad H. Mansour, the Palestinian ambassador, expressed thanks that the Kuwaiti resolution would have passed by a lopsided margin had it not been for the United States veto.

Addressing the measure's supporters, Mansour said, "You have rejected the might-over-right strategy, sending a clear message that no one is exempt from the law — not even Israel."

Danny Danon, the Israeli ambassador, denounced Security Council members who he said had "stood in solidarity with the terrorists of Hamas" in supporting Kuwait's resolution and rejecting the American one. "This double standard against Israel will not stand," he said.

Addressing the Kuwait delegation and others who helped draft its resolution, Danon said: "You couldn't bring yourself to mention Hamas even once. Don't you know how to spell it?"

Under the Trump administration, the United States has become increasingly isolated at the United Nations when it comes to the Israeli-Palestinian conflict.

President Donald Trump's decision to relocate the US Embassy in Israel from Tel Aviv to the disputed holy city of Jerusalem was met with widespread international condemnation.

The Palestinians, who want East Jerusalem to be the capital of a future Palestinian state, have been especially critical of the U.S. Embassy relocation and have said the United States can no longer be regarded as an impartial broker of any peace negotiation.