Stunned Iceland shoppers watched in horror as a stabbing victim stumbled into the supermarket after being attacked outside.

The man in his 30s shouted for help as he appeared at the doorway of the supermarket in the Halewood area of Liverpool yesterday evening.

Emergency services were scrambled to the scene in Leather’s Lane just before 5pm before the victim was rushed to hospital with ‘serious bleeding’.

It came just four hours before a 16-year-old boy was fatally stabbed three miles away in Belle Vale Road. A murder probe has now been launched. 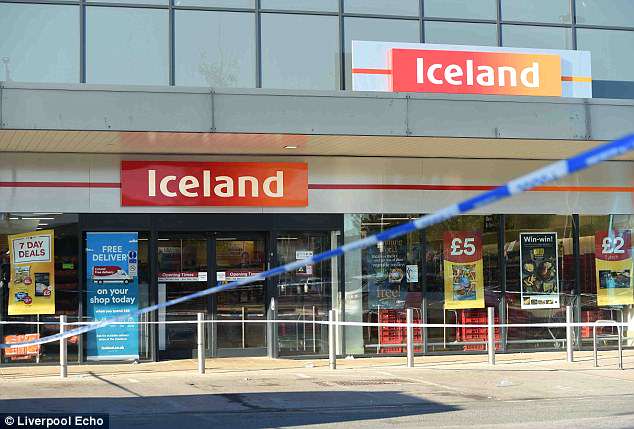 A man in his 30s stumbled into an Iceland supermarket in Liverpool after being stabbed outside around 5pm last night. It came four hours before another stabbing three miles away

A woman who was out shopping in the busy Halewood complex said of the first attack: ‘He went in the shop and was shouting for help.

‘Staff rushed to help him and called an ambulance. Police arrived at the same time.’

Another shopper said it was ‘shocking’ how brazen the assault was at the busy shopping complex at such a busy time of the evening.

A North West Ambulance Service spokesman told MailOnline they were called to the scene and found the victim with a ‘single stab wound and serious bleeding’ before rushing him to Aintree Hospital.

A spokesman for Merseyside Police said: ‘We are appealing for information following the stabbing of a man in Halewood this afternoon, Tuesday, 3 July.

‘Officers were called to Halewood Shopping Centre, Leathers Lane at 4.50pm to reports a man in his 30’s had been stabbed in the torso.

‘The victim has been taken to hospital for treatment to his injuries. His condition is currently being assessed.

‘Officers remain in the area to carry out CCTV, witness and forensic enquiries to establish the full circumstances and locate those responsible.’

Detective Inspector Neil Fletcher added: ‘The investigation is in its very early stages but this incident occurred in a busy shopping centre at a busy time of day and I am keen to speak to anyone who may have witnessed it.

‘I want to make it clear that Merseyside Police will not tolerate the use of knives to cause harm and the force is absolutely committed to eradicating knife crime and alongside our partners, we will continue to educate, enforce and act on any information given to us, to make the streets safer.’

A murder investigation has been launched (scene pictured) after a 16-year-old boy was stabbed and later died in hospital in Belle Vale Road, Liverpool

A murder investigation has been launched after the second victim died in hospital around midnight last night.

Extensive police cordons remained in place over night as officers searched the area. No arrests have yet been made.

A man living near to the lines of police tape told the Liverpool Echo: ‘I was watching the match but became aware something had happened when all the police arrived. It is getting worse, it’s terrible for something like this to happen just outside.

‘I’m not sure if the lad was local or anything.’

Another person living nearby told the newspaper the attack happened ‘around the same time Colombia equalised against England’ in last night’s World Cup clash. 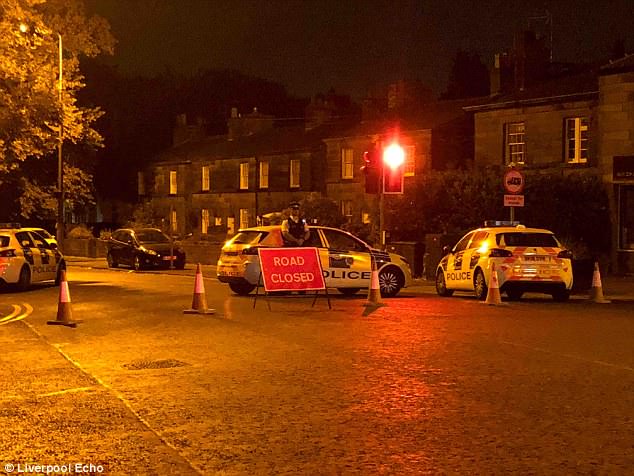 Murder scene: Belle Vale Road where a boy, 16, was fatally stabbed was cordoned off by police as night fell yesterday

Detective Chief Inspector Bev Hyland said: ‘We are in the very early stages of our investigation into this tragic incident in which a young life has been taken.

‘We are working to try and establish exactly what happened last night.

‘I want to appeal to anyone who saw the incident itself, or anything suspicious in the vicinity of Belle Vale Road, and the park opposite Woodholme Court, to come forward.

‘We also want to appeal to anybody who stopped to assist and may not have yet spoken to police, and anyone passing through Belle Vale Road who may have dash-cam footage.’