A German tourist is being sued by an Austrian hotel after he left reviews on Booking.com and TripAdvisor saying the hotel hung up a picture of a ‘Nazi grandpa’.

The guest, known only as Thomas K, said he found a photograph of a man in Nazi-era military uniform including a swastikas on display with a floral arrangement at the entrance to the hotel.

The man and his wife were on a getaway in the village of Gerlos in the Tyrolean Alps last August.

While they were checking-in, he noticed two framed portraits in the hotel’s reception, one of which depicted a young man in Wehrmacht with an eagle and swastika badge, the other of an older man.

He then posted reviews in German and English which read: ‘At the entrance they display a picture of a Nazi grandpa’. 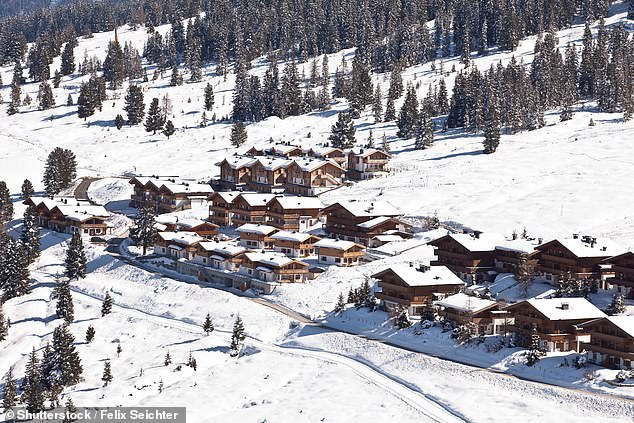 ‘This made us wonder what the hotel owners are trying to tell us with this image,’

‘This incident speaks volumes about the current state of affairs in this region of Austria.

‘Sadly, our desire to visit this mountain region has disappeared completely.’

The guesthouse owners contacted both travel websites and requested the reviews be taken down on the grounds they were defamatory.

Booking.com complied but TripAdvisor did not, leading to a court case.

While ‘Thomas K’ had posted comments under a pseudonym, they were able to identify him through his booking number.

Lawyer Stefan Kofler said the posts ‘gave millions of people the impression that my client sympathises with National Socialism’ adding that this had harmed her reputation.

Today, an Austrian court ruled the tourist had no right to complain about it on travel sites.

The owner obtained an injunction from a court in Innsbruck ordering the hotel guest to remove the online comments. The tourist has said he will fight the ruling.

In her filing she argued that it was customary for people in the Tyrol region to hang pictures of dead family members in the entrance halls of their homes.

The portrait was of a family member who had been ‘forced to enlist’ and killed in the war, she said.

In a separate case, the tourist is suing a member of the hotel owners’ family  for harassment over calls demanding he take down the reviews.

After its annexation by Germany in 1938, Austria became closely associated with Hitler’s Third Reich.

In 1947, however, it passed strict legislation against Nazi revisionism, negationism and neo-Nazi activities.

The farright FPOe party, which was part of a recent Austrian coalition government, was created by former Nazis after the war.