A father said his heroic little boy is ‘lucky to be alive’ after their Hotpoint washing machine caught fire while he was in the kitchen eating dinner.

Four-year-old Jaxon Masser was in the room with the door shut when the appliance burst into flames at his family home in Crewe, Cheshire, on September 29.

He immediately alerted his parents who called firefighters and said he was close to choking on smoke fumes. 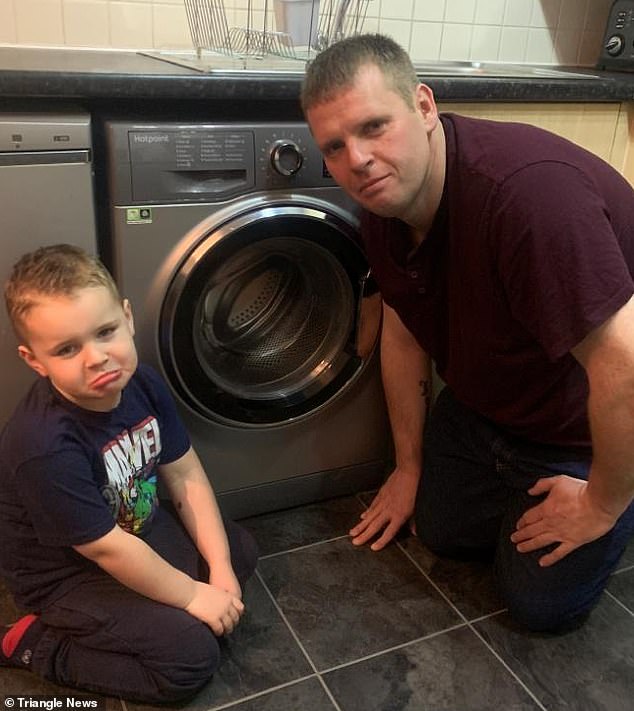 Brian Masser (pictured) described his son Jaxon (pictured) as ‘lucky to be alive’ after their Hotpoint washing machine caught fire in Crewe, Cheshire. He immediately alerted his parents who called firefighters  and said he was close to choking on smoke fumes

The family’s WMFUG 742 GUK model is one of half a million Hotpoint washing machines recalled due to fire risk in the last couple of months.

Nearly 519,000 washing machines sold in the UK between October 2014 and February 2018 could be affected by a flaw with the door-locking system that could lead to them bursting open or dangerously overheating. 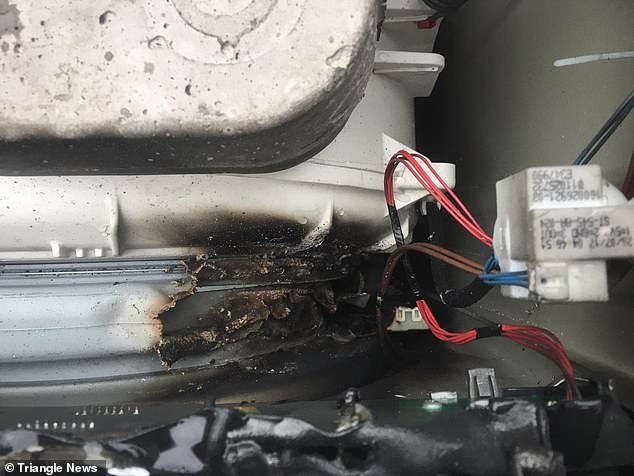 The family’s WMFUG 742 GUK model (pictured) is one of many Hotpoint washing machines urgently recalled over a fault causing them to set fire. Mr Masser said his engineer was ‘amazed’ it caught fire and Whirlpool has loaned him another machine

Mr Masser said: ‘Jaxon just rushed in and said there is a fire. He is lucky to be alive.’ 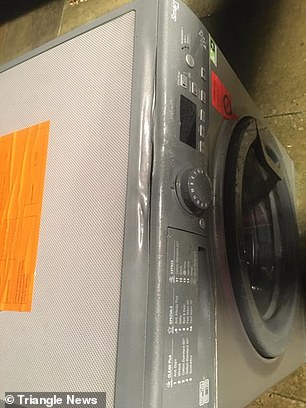 He described black smoke and ‘flames coming out of the washing machine’.

He grabbed the washing machine and wiggled it from the fixings before throwing it into the garden.

Mr Masser, who is a gas engineer, said he was ‘disgusted’ after hearing about the mass recall on Monday.

He added: ‘I was furious. The engineer who looked at ours was amazed it had set on fire.

‘It didn’t kill my child so we were lucky. It is only because he was switched on enough to raise the alarm.

‘He could have choked on the fumes.’

Mr Masser, who lives with his partner Rebecca, allegedly had his wires checked and believed only the washing machine could have been responsible for the fire.

Whirlpool is investigating and has loaned him a new machine, he alleged.

A letter from Whirlpool sent to the family read: ‘This replacement is offered to facilitate our investigation into the incident and is not to be taken as an acceptance of liability.

Your rights: What you will be entitled to under the recall

If you own one of the washing machine models listed in the box below, you will have the right to either of the following:

‘The replacement is on the condition that the new appliance becomes the property of Whirlpool and is ours to dispose of once the matter has been investigated.’

Mr Masser and Rebecca claim they have not heard from Whirlpool since regarding the investigation.

But the company apologised after the website kept crashing.

A statement read: ‘We are very sorry that we continue to experience technical problems with our registration website and we deeply apologise for the delay and concern this has caused.’

Customers are urged to call their customer service team on 0800 316 1442 or can check whether there machines are safe at washingmachinerecall.whirlpool.co.uk.

Here is a full list of the models involved in the Whirlpool recall of fire-risk Hotpoint and Indesit branded washing machines.

The models are listed by their commercial code, followed by the brand name.