How age, ethnicity and wealth could decide if you get vaccine first

Your age, ethnicity and wealth could decide whether you get the coronavirus vaccine first as experts consider using Oxford algorithm

Age, ethnicity and wealth could determine whether you get the coronavirus vaccine first under plans being considered by experts.

Scientists are looking at the prospect of using an algorithm developed by Oxford University academics to find out best who is most vulnerable to Covid.

The Joint Committee on Vaccination and Immunisation (JCVI), which is responsible for shaping the UK’s vaccine strategy, has already produced an 11-tier priority list, according to the Telegraph. 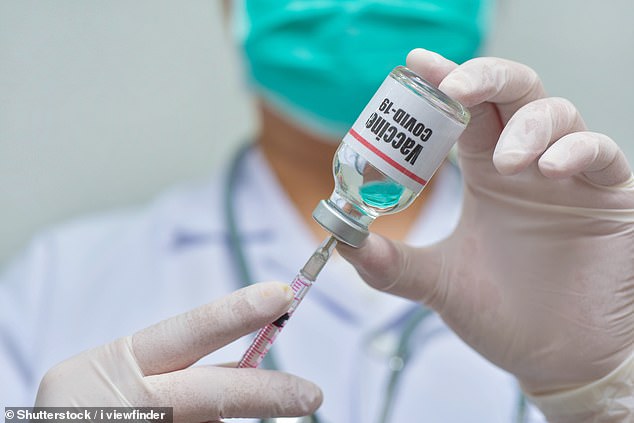 Age, ethnicity and wealth could determine whether you get the coronavirus vaccine first under plans being considered by experts

BAME PEOPLE ARE NOT GENETICALLY MORE AT RISK OF DYING FROM COVID-19, STUDY SAYS

BAME communities are two to three times more likely to die from coronavirus than other members of the population, analysis of NHS data has previously revealed.

However, scientists in Japan and the US found no differences in seven genes associated with viral entry of SARS-CoV-2 – the virus that causes Covid-19 – across ethnic groups.

Pre-existing medical conditions and environmental factors are more likely to blame for people of ethnic minorities being more likely to die of the disease, they said.

This is largely based on age but also considers a number of factors such as where individuals work and medical history.

Scientists are set to review the list shortly, with an updated version expected to be published in the next fortnight.

There has already been evidence published about the impact of the virus on different sections of the population.

Experts believe BAME communities have been hit harder by Covid-19 because ethnic minorities are more likely to be poorer and therefore in worse health, and more likely to work in public-facing jobs — leaving them vulnerable to catching the illness.

A report for Sadiq Khan last month made the same two conclusions, and it pointed out that a disproportionate number of BAME people work in risky jobs in the NHS and care homes.

It comes after a recent study concluded BAME people are not genetically more at risk, but face a greater danger because of their life circumstances.

Public Health England, which found a similar risk of death for BAME people in a long-awaited report published in June, warned historic racism and the hostility towards immigrants was partly to blame.

The report also discovered men were more likely to die from Covid-19, according to Office for National Statistics (ONS) data. 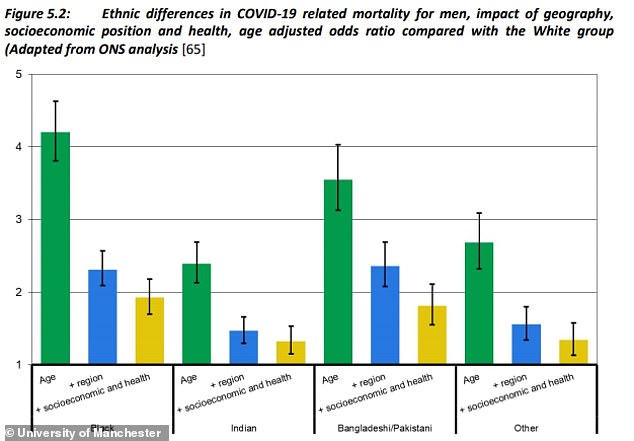 The study into Covid-19 death rates in London found that black men face a 1.9 times higher risk of dying than white men, even when their differences in age, where they live, and their wealth and health are taken into account (yellow bars indicate the increased risk when all those factors except race are taken out of the equation)

But women had experienced disproportionate economic, social and psychological impacts, it also concluded.

The minutes added: ‘It was noted that the tool would identify an individual’s risk of hospitalisation and mortality and could be used to stratify the population.

‘It was [also] noted that challenges with mass vaccine delivery could mean that a simpler programme could be the best way of delivering a programme.

‘The optimal programme could sit somewhere between the two approaches’.

It comes as Boris Johnson said the prospect of a vaccine in the first quarter of 2021 gives reason for optimism that the spring will be better for Britain.

Speaking at a Downing Street press conference, in which he announced a new national lockdown, the Prime Minister said: ‘I am optimistic that this will feel very different and better by the spring.

‘It’s not just that we have ever better medicines and therapies, and the realistic hope of a vaccine in the first quarter of next year,’ Johnson said at a news conference.

‘We now have the immediate prospect of using many millions of cheap, reliable, and above all, rapid turnaround tests… that you can use yourself to tell you whether or not you’re infectious and get the result within 10 to 15 minutes.’