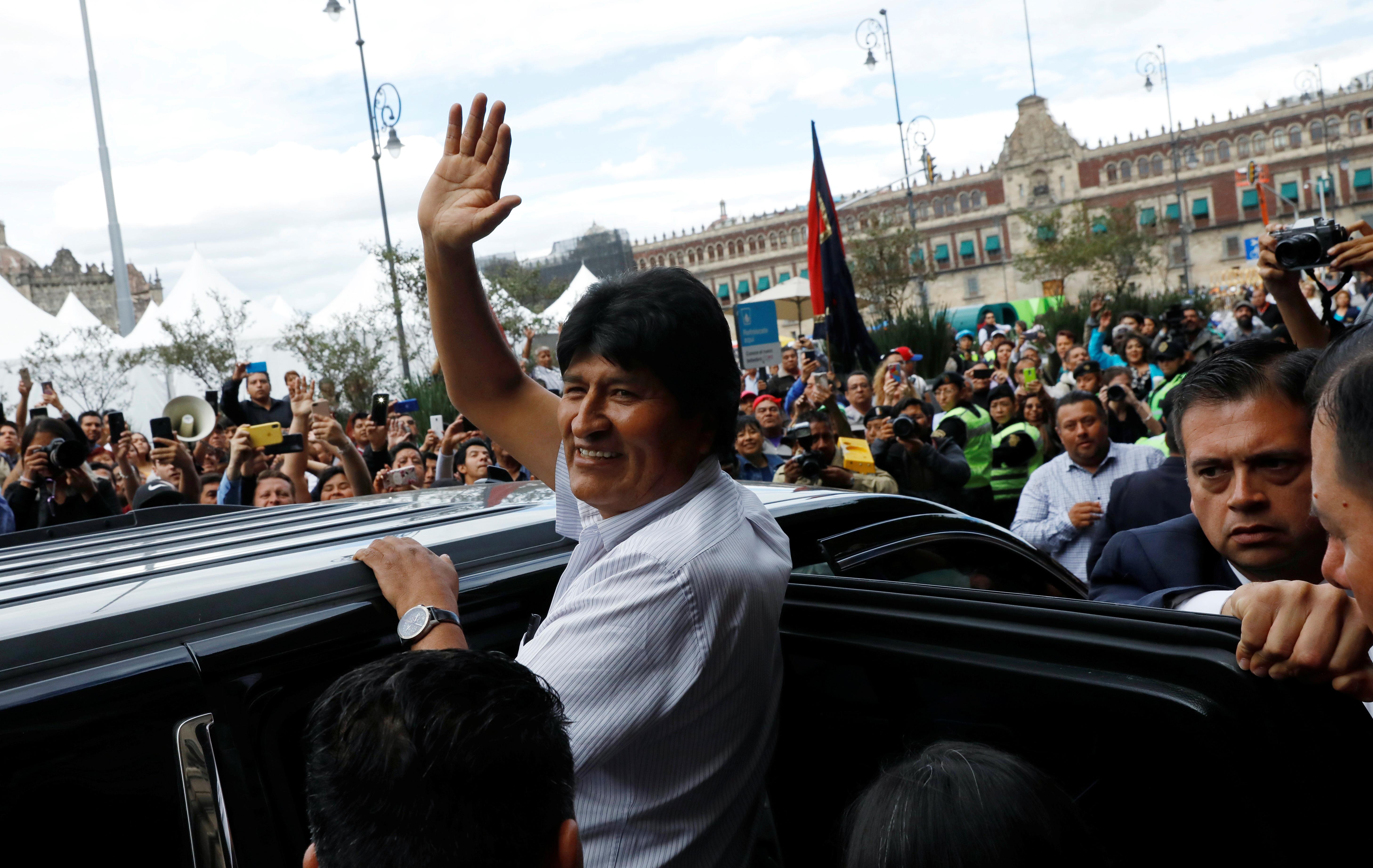 Bolivia for weeks had been gripped by violent protests after Morales declared victory in a disputed election that appeared to give him a fourth straight term. Election monitors said they suspected fraud.

Members of the Police Operations Tactical Unit, known as UTOP, had repeatedly clashed with anti-government protesters armed with sticks, rocks and makeshift bombs. In the courtyard of the unit’s compound that evening, dozens of assembled officers made a decision: They would cease defending Morales and join demonstrators in calling for his resignation.

By Saturday, UTOP forces had abandoned their posts.

Analysts say UTOP’s pivot, part of a wave of police defections across Bolivia, helped doom Morales’ government. Without the support of local law enforcement, his administration could not control Bolivia’s streets. Losing the allegiance of the unit charged with guarding the presidential palace in La Paz, the nation’s administrative capital, was a particularly cutting blow.

The nation’s military, largely passive amid the unrest, quickly signaled that it would not confront the protesters. On Sunday, Williams Kaliman, the commander-in-chief of the armed forces, said Morales should step down in order to foster “peace and the maintenance of stability in Bolivia.”

By Sunday afternoon, Morales had resigned. On Tuesday, he flew to Mexico, where he had been granted asylum.

Reuters talked with five UTOP police officers who requested anonymity because they are not authorized to speak with the press.

They cited various reasons for withdrawing support from Morales, Bolivia’s first indigenous president, who had led the country for nearly 14 years.

Some complained his government had lavished generous salaries and pensions on the armed forces, without offering similar benefits to police. Some said they were ordered by superiors to crack down only on anti-government protesters while avoiding conflict with pro-Morales loyalists. Others said they were simply worn down by weeks of conflict after the president’s controversial Oct. 20 election victory.

“At some point, it was just enough,” one officer said.

“President Morales has always respected the police and military as institutions,” Flores said. “The Bolivian police, under this government, went around with new trucks, new equipment, appropriate uniforms.”

The episode is key to understanding how Morales lost his grip on power.

But over time he alienated some indigenous supporters who had once hailed him as their champion. Morales clashed with native groups over development of tribal lands and constructed an ostentatious new presidential palace that he dubbed the Great House of the People. He also engineered a way around presidential term limits, enraging critics who viewed the move as an authoritarian power grab.

“The government lost its shield,” Pareja said. “As a result, it was totally vulnerable and couldn’t go on.”

Morales has blamed his exit on a “coup” arranged by his political enemies. He has said he would consider returning to Bolivia to help bring peace to a deeply polarized nation in crisis. Supporters of Morales do not recognize the interim government. Street violence and protests continue.

“The most cunning and disastrous coup in history has been carried out,” Morales wrote on Twitter on Tuesday.

Signs of trouble for Morales had been building well before this year’s election.

His popularity had slipped amid a softening economy and complaints he had lost touch with his man-of-the-people roots and was now manipulating the levers of power to remain in charge.

Morales first took office for a five-year term in 2006. In 2009, he pushed through a new Constitution that called for early elections that same year, which he won handily. That process effectively re-set the clock on his presidency, allowing him to run for a third term in 2014, even though the Constitution limited presidents to two terms.

Angling for even more time in office, Morales in 2016 held a public referendum asking Bolivians to allow him to run for a fourth term. Voters narrowly rejected it.

But the nation’s Supreme Court, stacked with allies, let him run anyway. In a highly controversial 2017 ruling, they deemed term limits a violation of basic human rights.

Morales said he had been subject to a false, foreign-led smear campaign leading up to the referendum. Supporters have said the Supreme Court decision reflected the will of the people because those judges are elected officials in Bolivia.

Public frustration was on display Oct. 4 in the eastern city of Santa Cruz, a little more than two weeks before the presidential election. Banners in the crowd read “Dictator Evo.” A civic leader named Luis Fernando Camacho gave a fiery speech slamming Morales’ “illegal” government and called on Bolivians to vote him out of office.

As results rolled in on election day, Morales held a narrow lead over his main rival, Carlos Mesa of the Citizens Community party, in a crowded field of nine candidates.

Bolivia’s electoral system requires a run-off between the top two vote-getters if no presidential candidate wins an outright majority or garners at least 40% of votes, while beating their nearest competitor by at least 10 percentage points.

With more than 80% of the votes tallied, Mesa and Morales appeared headed for a second round. But the count was suddenly halted at around 7:30 p.m. The Organization of American States (OAS), which had been invited to observe the election, expressed alarm.

Almost a day later, the count restarted with tallies showing momentum had shifted dramatically in favor of Morales. He cruised to a 10.5-percentage-point victory, eliminating the need for a runoff.

Amid unrest, civic leader Camacho became a lightning rod for the opposition. He pledged to march into La Paz and hand Morales a resignation letter to sign.

“Evo’s days in office are numbered,” he told Reuters at a Nov. 5 rally.

Morales’ government was weakened, but still in control. He urged Bolivia to await the results of an election audit, which had been initiated by the OAS.

Then came the Nov. 8 police defections.

What started with one mutiny at a police unit in the central city of Cochabamba in the morning quickly spread to the cities of Potosi, Santa Cruz and La Paz.

Rattled, Morales looked to rally his generals, including armed forces chief Kaliman, a long-time ally. He met with defense officials on Friday at the Great House of the People, but they offered little concrete support.

On Saturday, Kaliman said in a statement the armed forces “would never confront the people.”

Another bombshell came on Sunday at dawn. The OAS released its audit, which cited “serious irregularities” in the election, including phantom votes, forged ballots and “clear manipulations” in the count.

The OAS called for the results to be annulled and a new vote scheduled. Morales agreed to those demands, but was rebuffed by opposition leaders.

“Morales wanted to talk, but we didn’t want to. It was too late,” said Susana Campos Elio, an opposition lawmaker from La Paz.

Morales has since said the OAS “is in the service of the North American empire.”

A slew of ruling party lawmakers resigned, including the head of the lower house and mayors of major cities such as Potosi, Oruro and Sucre, Bolivia’s constitutional capital.

Shortly afterward, Morales announced in an emotional address that he would resign.