IT was a trailblazing career cut short by a “moment of stupidity”, but today Frank Bough, who has died at the age of 87, is being remembered as one of the TV greats.

As one of Britain's top presenters for over three decades, the ex-footballer fronted BBC sports programme Grandstand and launching the Breakfast TV show in 1983. 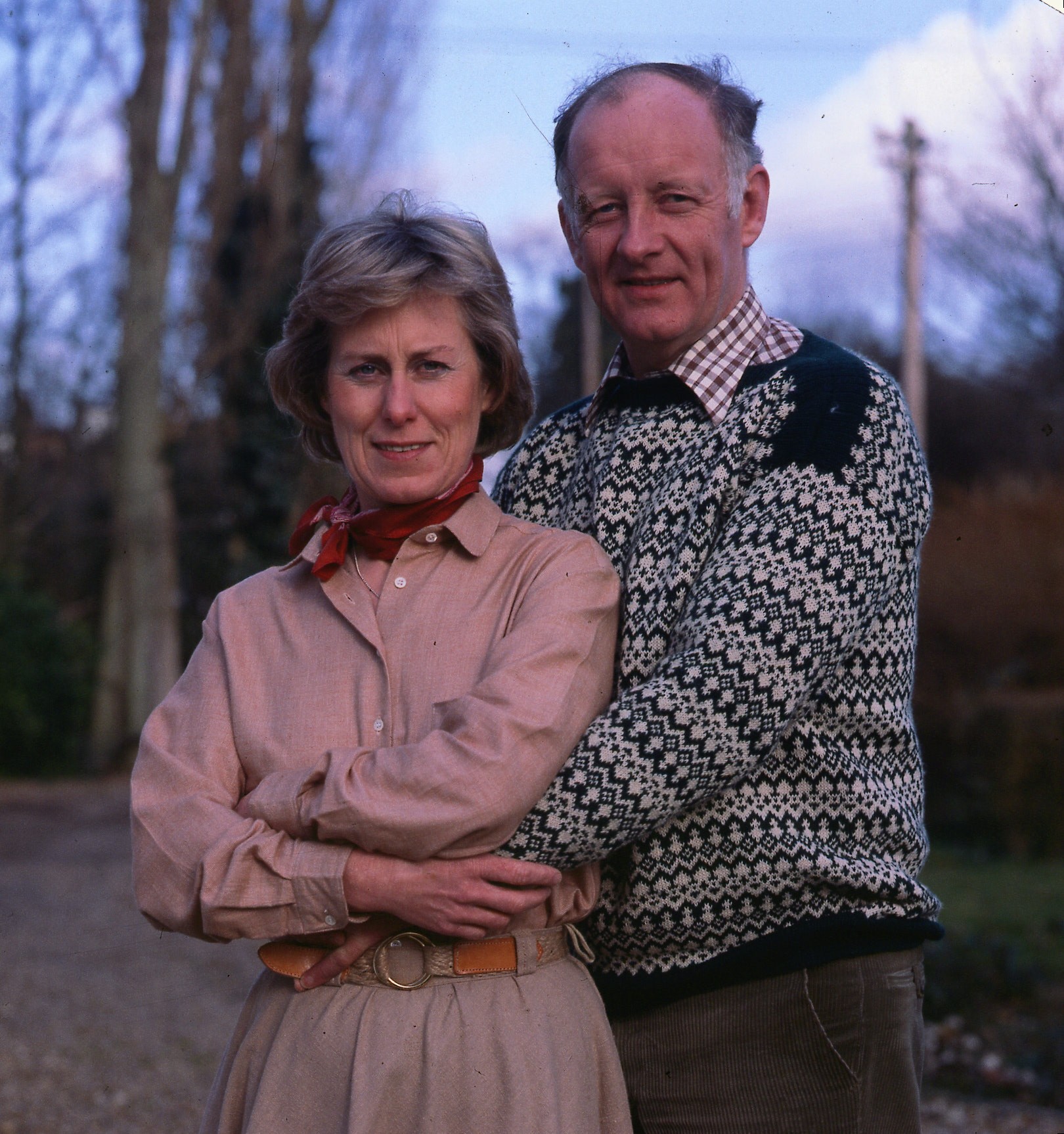 The star – who passed away in a care home last week – ducked out of the limelight after the revelations, but remained married to wife Nesta, the mother of his three sons.

He later revealed he regretted the lapse, but hoped to be remembered for the unflappable, reassuring style of presenting that endeared him to millions of TV viewers.

"It was a brief but appalling period in my life," he said. "Don't condemn my entire career for a brief episode I regret." 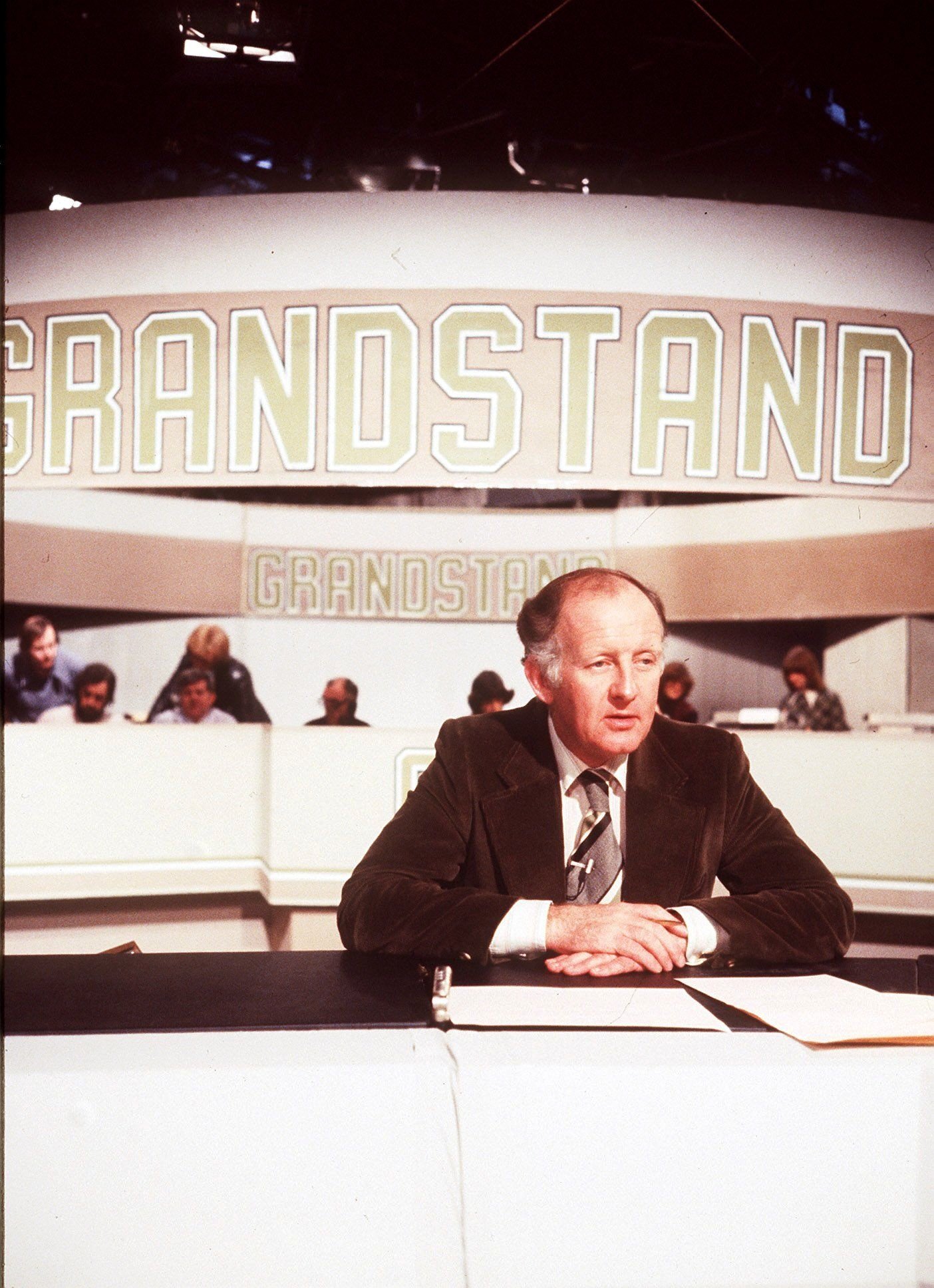 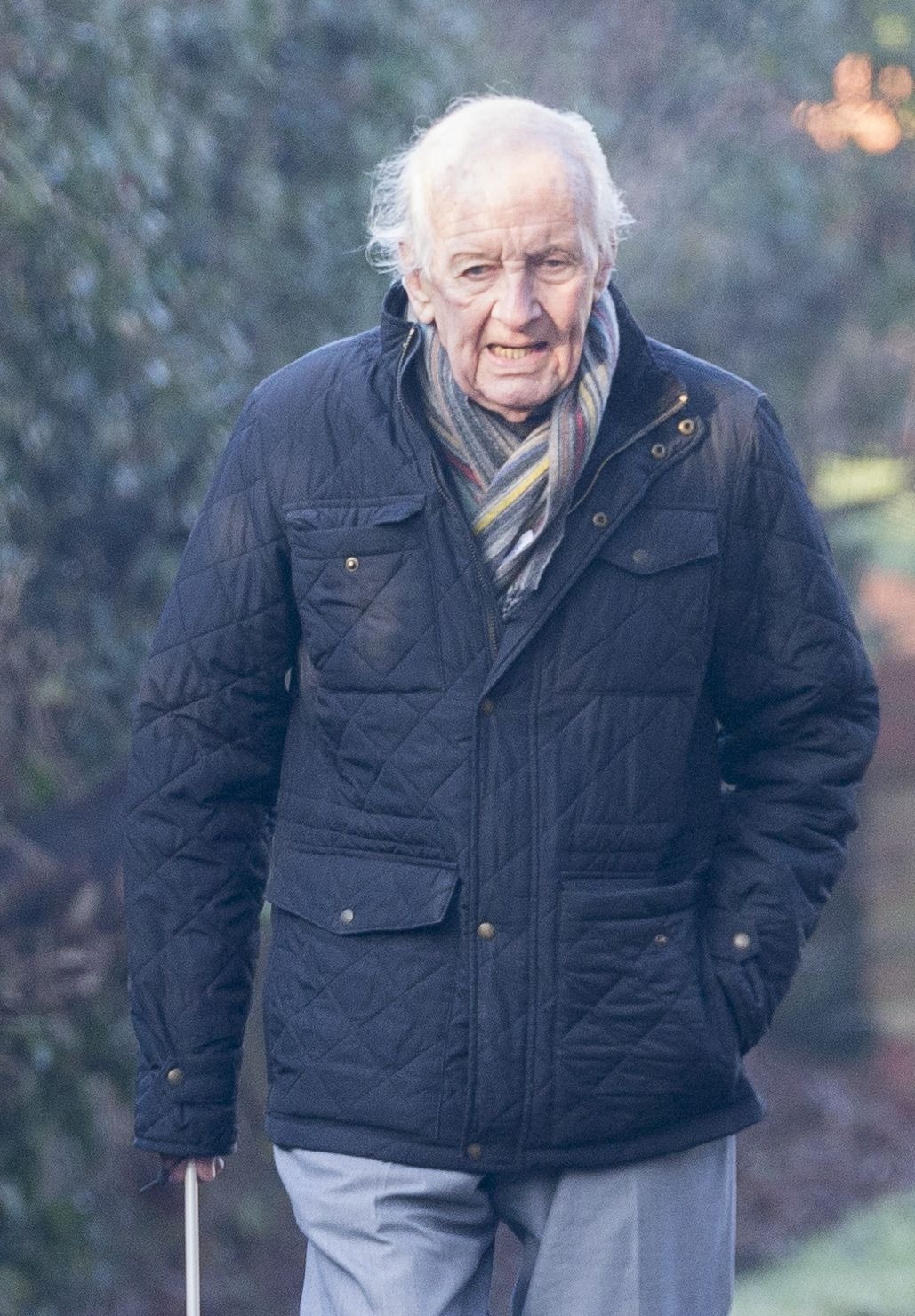 The son of an upholsterer from Stoke On Trent, Frank was born in 1933 and raised in Shropshire, where he went to a local grammar school before winning a scholarship to Oxford.

Frank met Nesta Howells while he was doing National Service and the couple married as soon as he left the army, going on to have three sons – David, Stephen and Andrew.

Despite landing a good job at ICI, Frank was so determined to become a broadcaster he pestered the BBC for two years before landing a slot on regional news programme, Home at Six, in Newcastle, which later became Look North.

His sports knowledge soon saw him taking over as presenter of Sportsview in 1964 and fronting BBC's Sports Review of the Year, now Sports Personality of the Year, for 18 years. 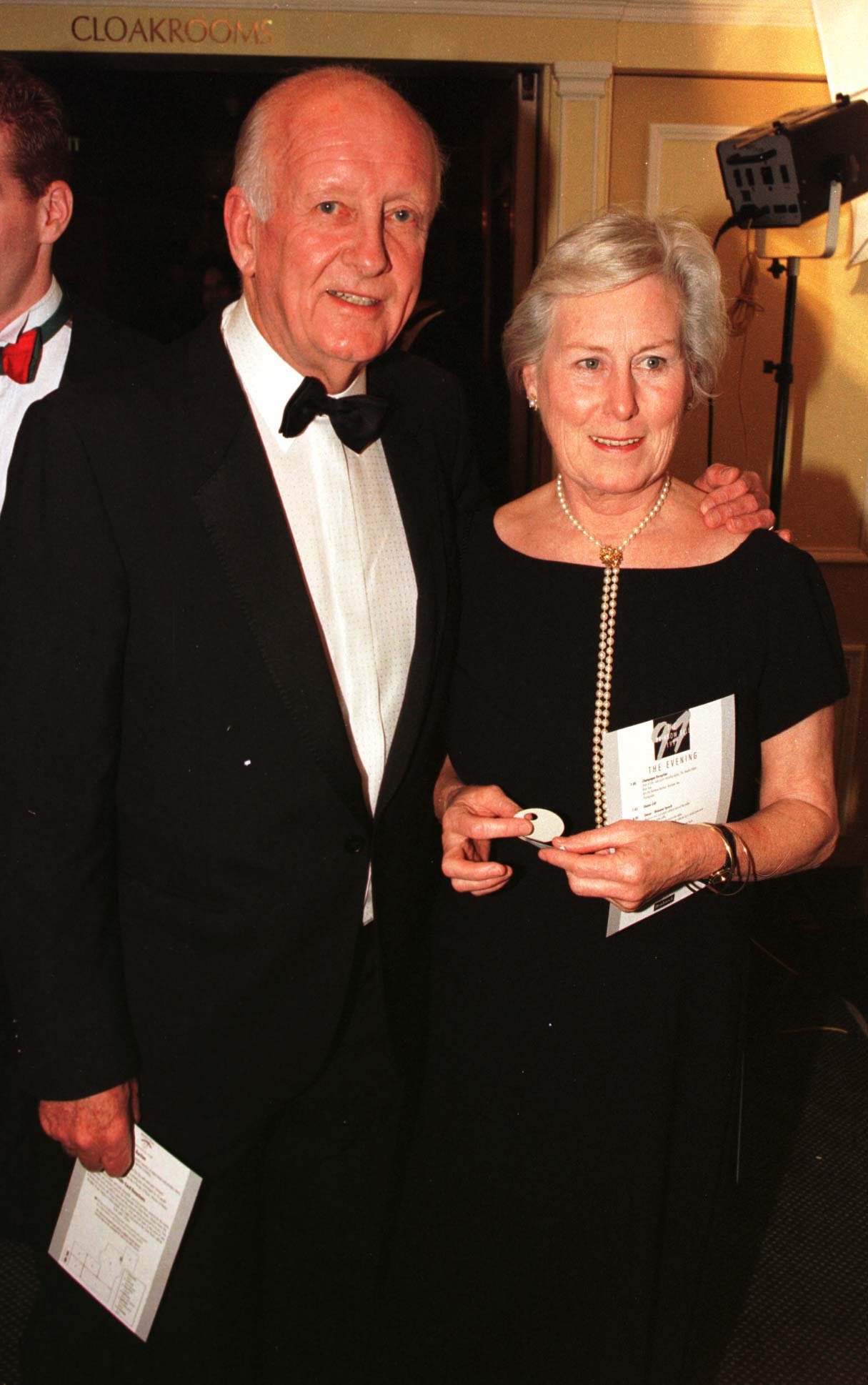 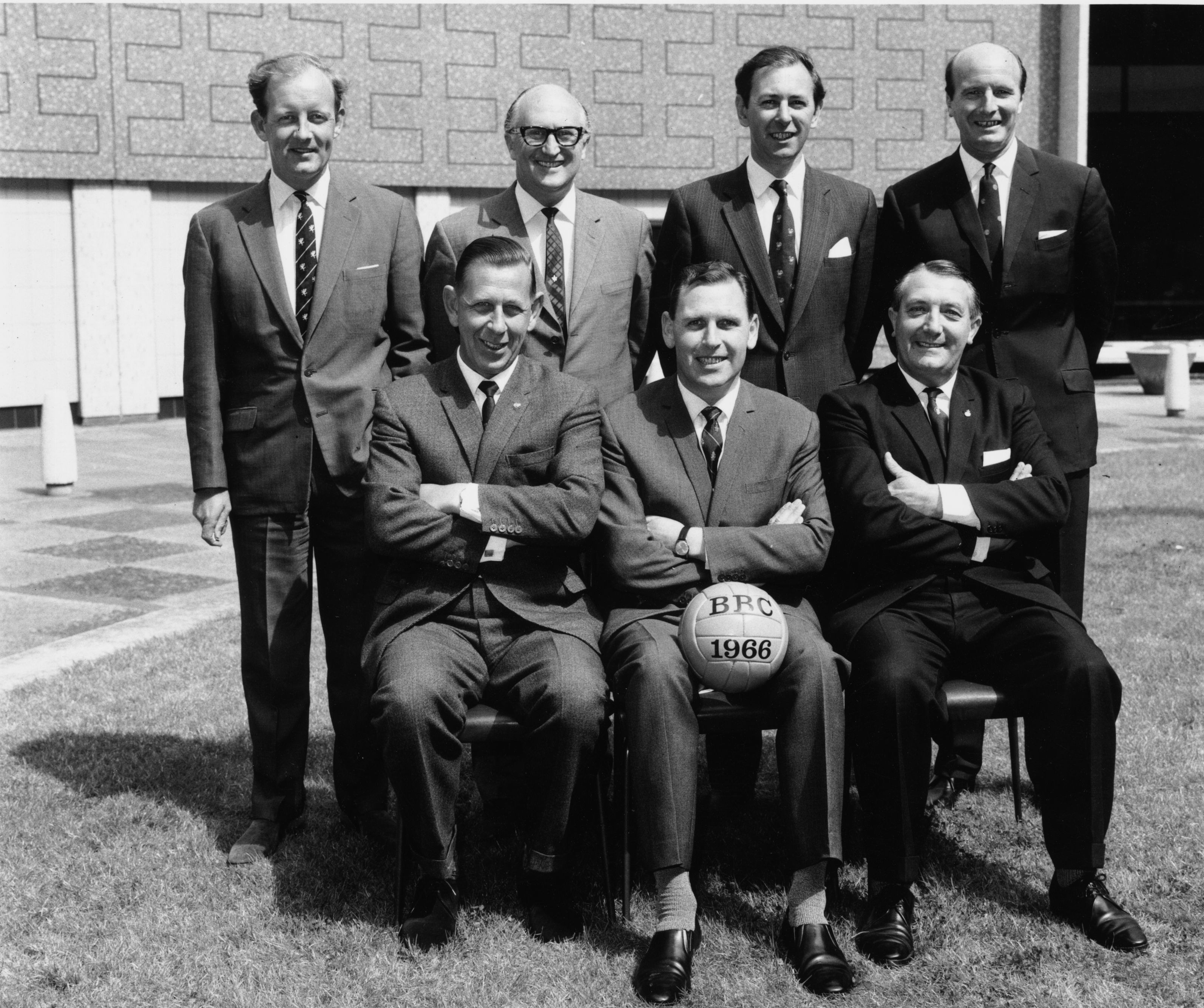 He was also part of the commentating team for the 1966 World Cup, witnessing England’s legendary victory over West Germany to win the tournament.

But Frank’s most famous stint was as the face of the BBC's flagship sports show Grandstand, from 1968 to 1982, covering everything from the Olympic Games and FA Cup finals to the Grand National.

His fellow presenters praised his ability to remain calm, whatever went wrong on the live show.

Michael Parkinson once remarked: "If my life depended on the smooth handling of a TV show he'd be the one I'd want in charge".

The language and shouting I could hear in my earpiece was, at times, horrific!

But he later admitted he was under strain at times.

"There was a lot of bloodshed on the programme, I can tell you,” he said.

"The language and shouting I could hear in my earpiece was, at times, horrific! After four-and-a-half hours of that I would totter away absolutely knackered. It was hard but we were trying to make the best programme we could.''

In 1972 he began presenting Nationwide, the BBC's early evening news programme and in the same year, he covered the Munich Olympics, which saw 11 members of the Israeli team murdered by the Palestinian terrorist group Black September.

"It was a bizarre situation," he later said. "The athletics continued while people were getting killed."

In a lighter moment, he famously appeared in a sketch on the Morecambe and Wise Christmas Show, singing There Ain’t Nothing Like A Dame, alongside Eddie Waring and Barry Norman. 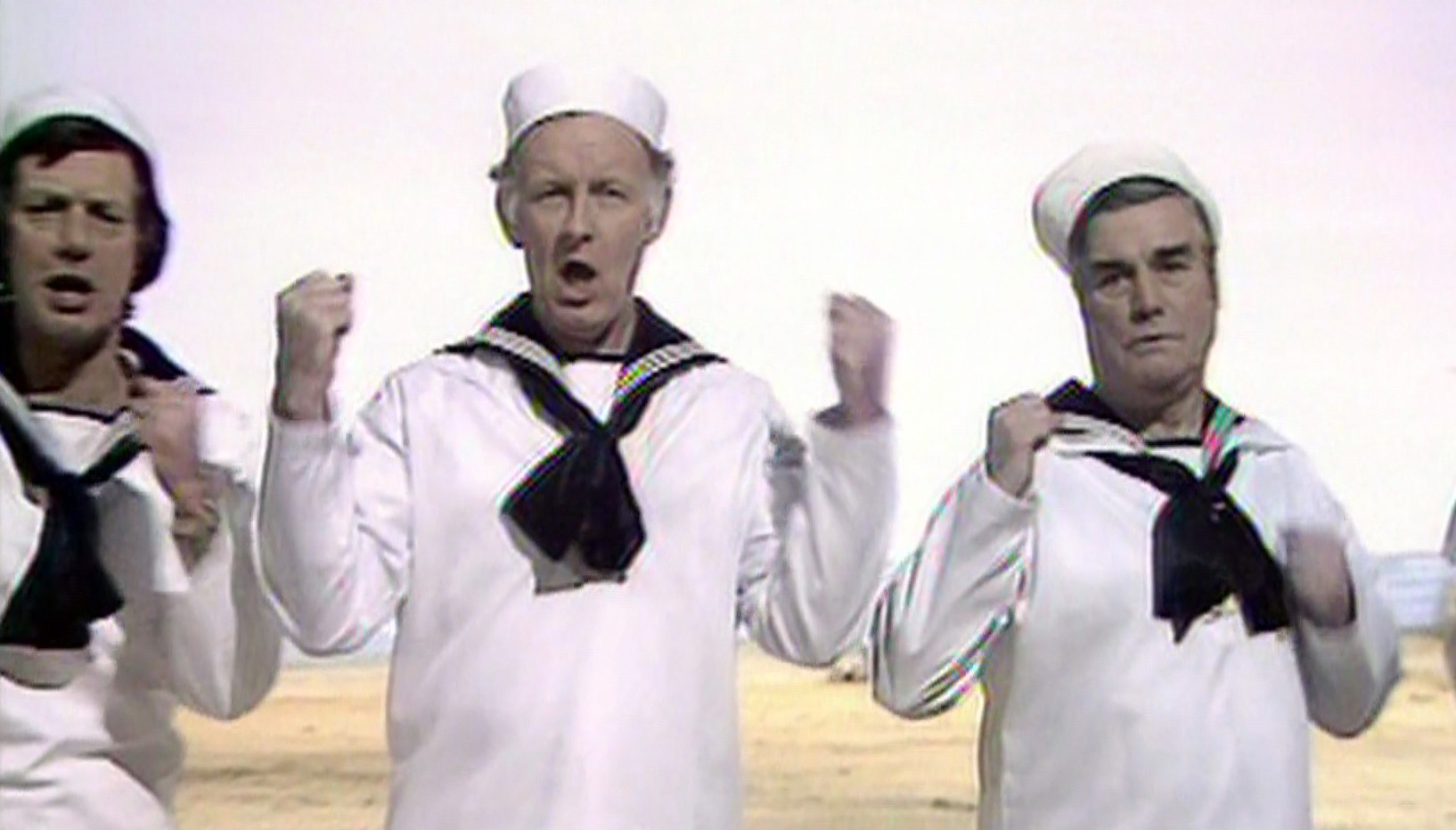 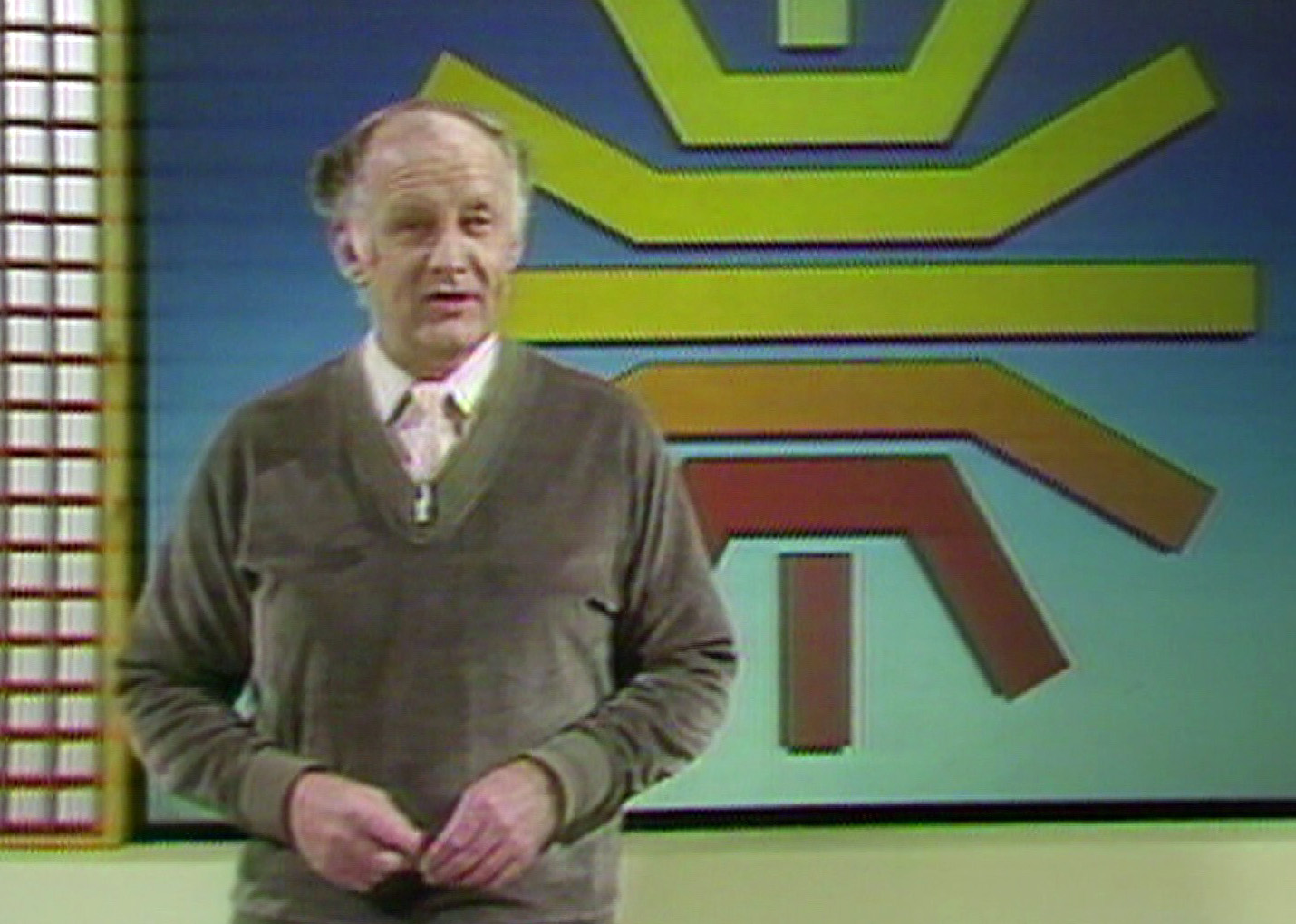 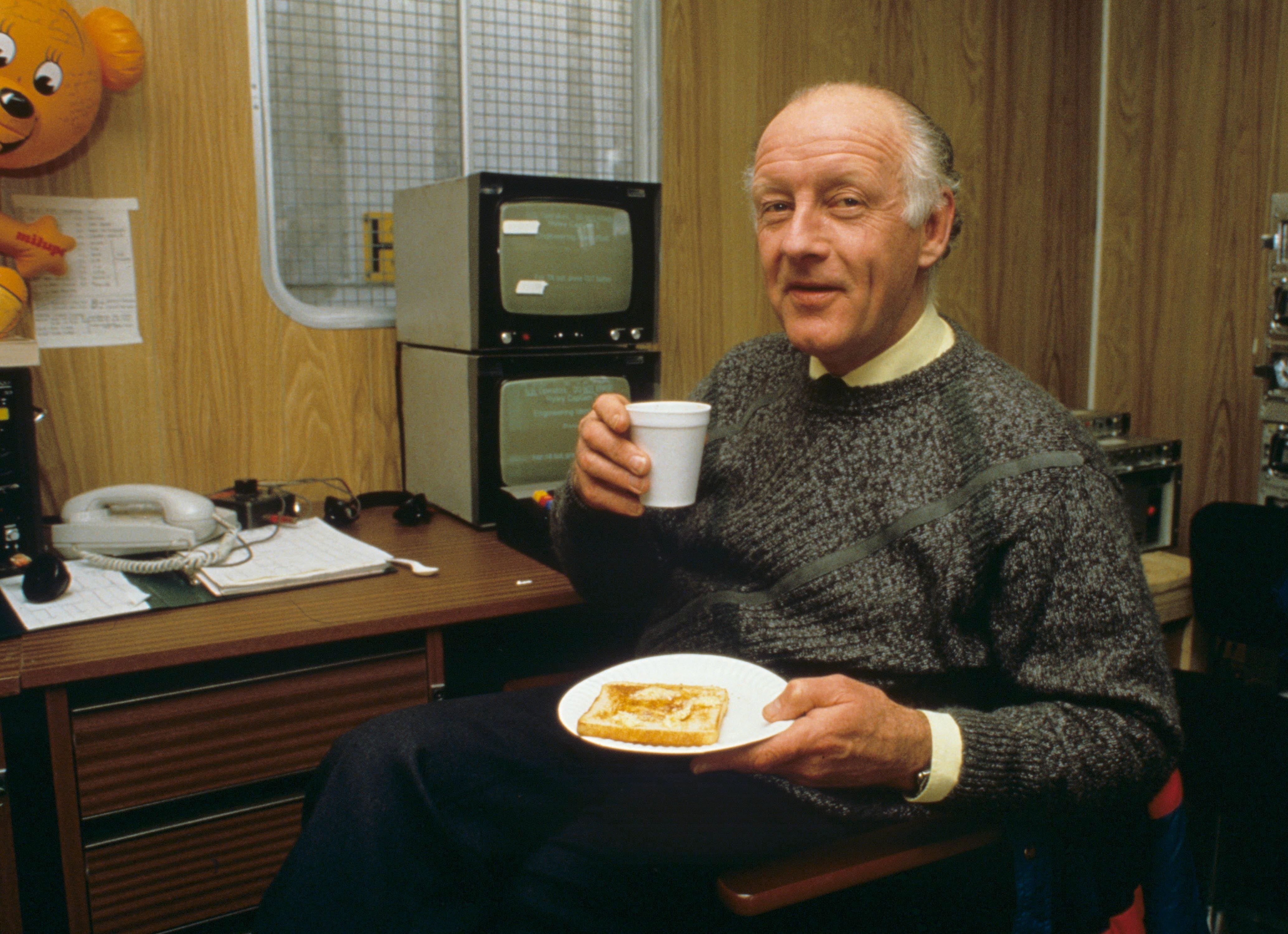 When the BBC decided to launch the first live breakfast show in 1983, Frank was a natural choice.

His laid-back style and love of cosy jumpers were an instant hit with Breakfast Time viewers and co-presenter Nick Ross praised the “sense of serenity and reassurance” he brought to the show.

But his image as a clean-cut family man was shattered in 1988 after revelations that he wore women's lingerie at cocaine parties with prostitutes and he was sacked by the BBC.

He soon landed a job covering the Rugby World Cup on rival channel, ITV, but four years later he was snapped leaving a prostitute’s flat in London.

After the scandal hit the headlines, he told the press: “I have been exceedingly stupid and I accept that.

“I caused a lot of pain to my wife and my family and I bitterly regret all these things – but I have to say that I believe that everybody, when they have difficulties with their marriage or sexuality, surely has the right to sort these things out in the privacy of their own home.” 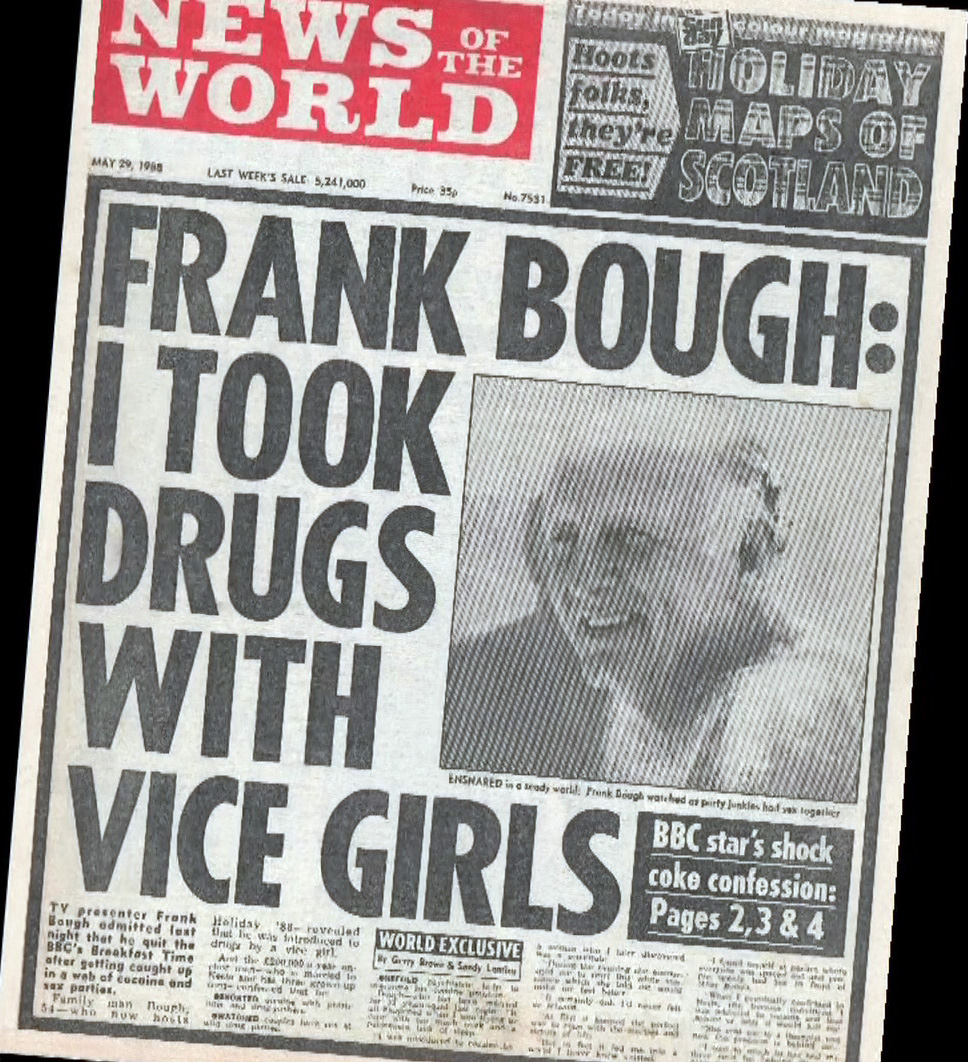 Loyal Nesta stood by her husband but later admitted she had been angry and had considered leaving him.

Speaking on a Sky News programme, she said: “Obviously I have thought, ‘Do I stay or do I go?’.

“We have been together a long time. We have brought up a family.

“We have still got a lot going for us. I do feel betrayed by it, but I do not feel that it is anything personal to do with me.” 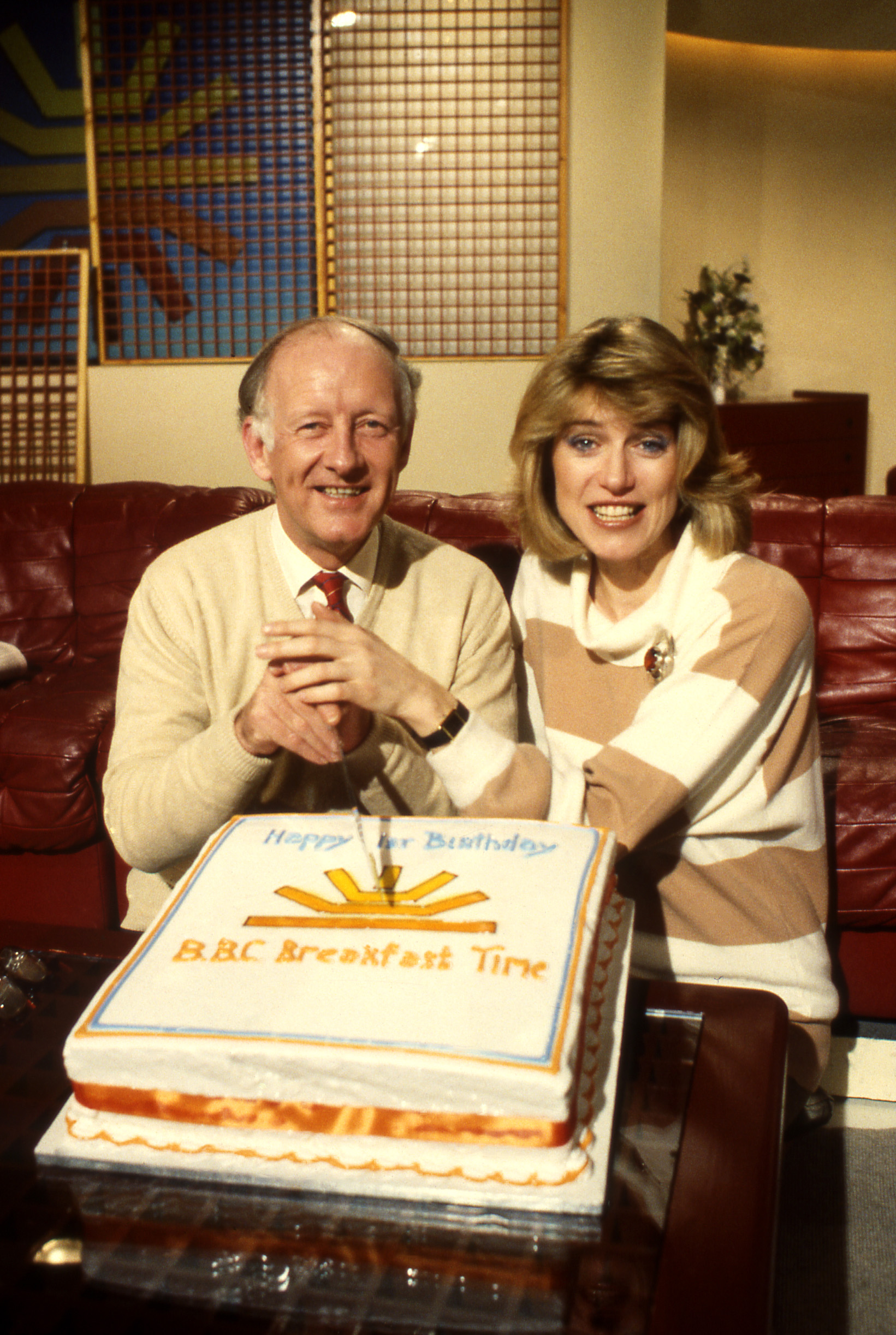 Sadly, despite some stints on LBC and Sky, Frank’s career never fully recovered from the blow.

But today he is being remembered as one of the UK’s best broadcasters – and one of the nicest men in the business.

Jeff Stelling added: “I met Frank Bough when I was a young reporter. He was kind, helpful and generous with his time. His brilliant career was blighted by scandal but I hope people will remember how fine a broadcaster he was. One of the very best in the business.”

Presenter Nick Owen tweeted: “RIP Frank Bough. I regarded him as the ultimate broadcaster who combined news and sport brilliantly. Whatever the scandals that broke around him, he was an inspiration to me when I started in tv more than 40 years ago.”

Piers Morgan tweeted: "RIP Frank Bough, 87. Star of Grandstand, Nationwide and Breakfast Time. His career was ruined by scandal, but he was one of the great live TV presenters. Sad news.

The BBC also paid a final tribute to the former Grandstand host, who died in a care home on Wednesday.

A spokesperson said: "Frank excelled as a live presenter with the BBC for many years and we are very sorry to hear of his passing.

"We send our condolences to his family and friends."