How has Becks kept his hair on? It’s an almost unbelievable transformation. But, as we reveal, there have never been so many ingenious solutions for a chap’s thinning thatch

BLONDE. Brunette. Mohawk. Long and flowing, slicked back and quiffed. Over the past two decades, David Beckham has showcased more hairstyles than his fashion designer wife.

The original ‘metrosexual’ man, Beckham has become as much an expert at monetising his looks as he was at scoring goals.

From a reported £4 million endorsement with Brylcreem in 1997 to an estimated £40 million deal to become the face of Gillette in 2004, Goldenballs has built a business empire on his grooming regime. His latest enterprise, House 99 Grooming Line, was launched in March with the motto: ‘Life is too short for a bad haircut.’ 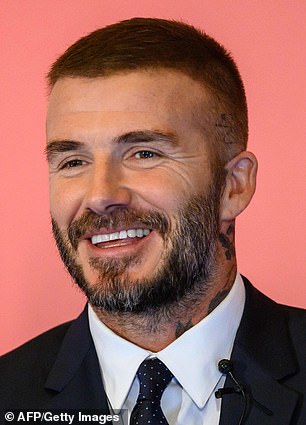 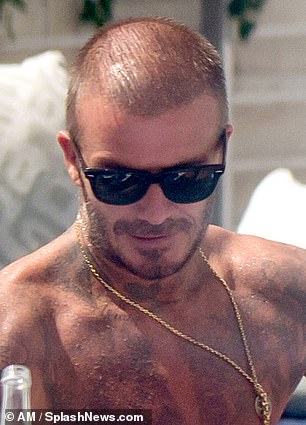 Left, Beckham pictured earlier this month looking thin on top and right Beckham this week with what appears to be a full head of hair

A touch embarrassing, then, that pictures of Beckham emerged this month which seemed to suggest he was getting thin on top.

But wait! This week the father of four was pictured, somewhat bafflingly, with what appeared to be a full head of hair — not to mention a line free-forehead, dazzling white teeth and cheeks full enough to make a twenty- something envious.

So how is Beckham holding back the years? And what has he done to his barnet?

HAS HE HAD A TRANSPLANT?

Beckham’s camp have refused to comment on whether he’s had a transplant — a surgical procedure in which hair is extracted from an area of the scalp with dense growth and re-implanted into thinning areas under local anaesthetic.

Beckham himself once suggested he wouldn’t be tempted. ‘There is definitely nothing wrong with doing that,’ he said in 2012, ‘but I don’t think personally I would. If I do start showing signs of going bald, then I will shave it off.’

Hair transplant surgeon Dr Bessam Farjo, meanwhile, says there is no way the star could have had a transplant that resulted in a head of new hair in the space of a few weeks. ‘Transplanted hair takes about three months just to break through the skin,’ says Dr Farjo. He adds, however, that this doesn’t mean Beckham hasn’t had a transplant at some earlier stage.

‘It’s possible he might have had a transplant many months ago and been extremely clever, clipping his hair short to divert attention from it.’

A transplant on the front of the head extending to the crown would take around ten hours and cost around £10,000. As Dr Farjo says: ‘A lot more men than you think have had a hair transplant, including top names who want to keep it discreet.’

PUMP UP THE VOLUME

Even if he has had a transplant, says Dr Farjo, there is ‘definitely some sort of cosmetic trickery’ at play to make Beckham’s hair look thicker.

‘It’s possible he’s using a camouflage product, like a hair fibre spray, to give the illusion of thicker hair,’ he says. ‘It’s a bit like putting on make-up.’

Fibre sprays work in two ways. ‘They reduce the contrast in colour between the hair and skin so you don’t see the scalp so easily, and they coat the hairs with a powdery material to make the hair appear thicker,’ says Dr Farjo.

‘It is quite common for make-up artists to use them on men in the media to make their hair look better under cameras. It lasts until you wash it out.’

And whether, in Beckham’s case, the end result is ageing Adonis or nondescript middle-office-manager is a matter of opinion. ‘It looks good — but maybe a bit over the top,’ says Dr Farjo.

A MANE TO DYE FOR

Regardless of how he got the volume back, there is no denying his hair has changed colour, with Becks’s reinvention as a brunette a marked move away from the blond locks of his past. But while many might think he’s well shot of the highlights, the jury’s out on this new shade.

He adds, however, that this ‘can look severe’ especially given the grey in his beard, and says Beckham would be better off going grey.

FRESH-FACED IN HIS FORTIES

Becks’s face is largely wrinkle free – unusual for a man in his mid-40s. His cheeks are impressively full, and his smile lines less pronounced than in recent years.

Of course, this could be down to a diligent skin care routine. ‘One thing I do love is a face mask,’ he said recently.

‘It is entirely possible his youthful looks could be the result of a good skin care regime and non-invasive treatments,’ he says.

‘Micro dermabrasian, for example, removes the dead skin cells to make the skin look smoother while peels — acids applied to the skin — may rejuvenate the skin and stimulate it into increasing collagen, the support structure underneath.’

SOMETHING TO SMILE ABOUT

As a member of Manchester United’s youth team David’s teeth were slightly yellow, with the odd one as curved as his legendary free kicks at goal. Now they are straight, devoid of gaps and whiter than an England football kit.

According to Dr Mervyn Druian of The London Centre for Cosmetic Dentistry, he is likely to have had both braces and veneers.

‘I’m assuming that David would have had a lingual brace, which is placed at the back of your teeth and invisible. Veneers, in which very fine porcelain is bonded over the natural teeth, are likely to have changed their colour and lengths. His orthodontic treatment could have taken anything from four months to a year.’

He adds: ‘I’m sure the orthodontics were done some time ago, with other enhancements done more recently. The cost would have been around £8,000 to £10,000 and it is a very good result indeed.’

He could just lead a worry-free life, but Beckham’s forehead is incredibly smooth for a man of his age. This could be attributed to a skilled application of Botox, although Beckham did specifically say he didn’t ‘agree’ with the procedure last year.

Dr Patterson doesn’t think Beckham has had Botox, but says it ‘is very much on the rise among men, with lots of partners encouraging them to have it done’.

Mr Azhar Aslam, lead surgeon at Linia Cosmetic Surgery, says: ‘There seems to be less indention in some of the lines in his forehead and his frown line which would suggest that he has had some Botox in this area.

‘However, it is probably only a small amount as he does not have the frozen look.’ He adds: ‘David has a great expressive face and I doubt he has had Botox around the eye area.

‘As a surgeon I would also recommend not having Botox in this area as David has a great smile, which comes through in his eyes.’

So what else can Becks do to halt his hair loss…

TRANSFORMATION OF THE TOUPEE

Hair pieces have come a long way in recent years, with celebrities from Charlie Sheen to John Travolta reported to have worn them.

‘With a hair piece you can have any look you want,’ says Dr Farjo. 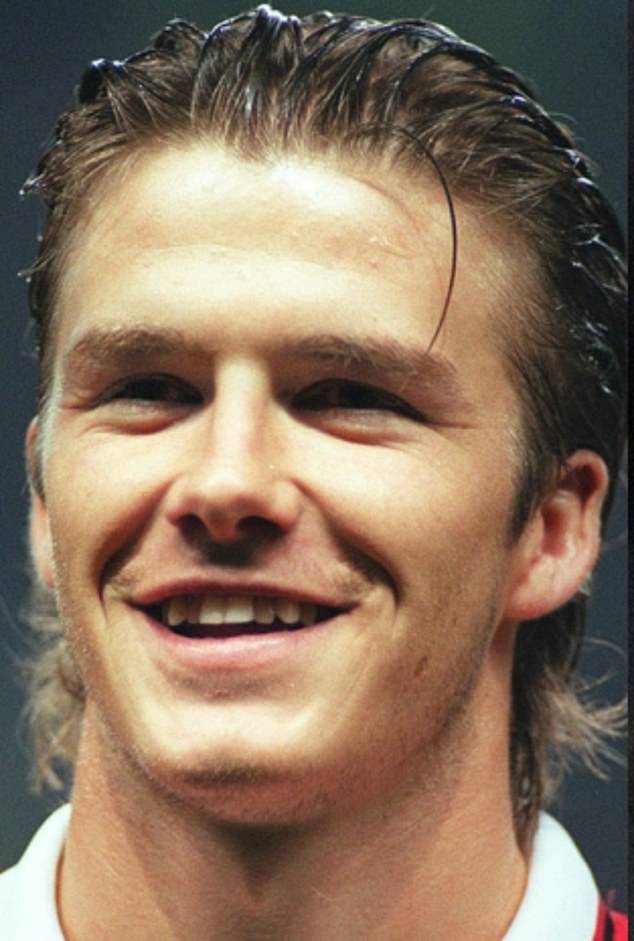 Beckham, pictured in his wonky-toothed heyday, has sported many hairstyles over the years

Hair4all, a company offering ‘non-surgical hair replacement systems’ from around £550, says demand has never been higher thanks to men wanting to look like their favourite reality television stars. After an initial consultation their hair pieces are designed over a 12-14 week period, stay attached to the head for up to a month.

For men with thinning hair and bulging wallets, there is a version of the ‘vampire facial’ in which the patient’s own blood is injected back into their scalps.

In a ‘platelet rich plasma treatment’ (PRP) blood is said to stimulate the hair follicle, prolonging its growth phase. The blood is collected and separated so that the platelets — which contain protein and stimulants — can be injected back into the scalp.

The treatment takes 90 minutes under local anaesthetic. One treatment every four to six months for the first year is recommended and one treatment a year for maintenance thereafter. Treatments cost upwards of £1,000 and there have yet to be any major clinical trials on it.

‘It’s fashionable, and good at preparing the scalp for a hair transplant, but the jury is definitely out on how beneficial this is,’ says Glenn Lyons, clinical director at The Philip Kingsley Trichological Clinic in London. ‘There is no substantial evidence it works.’

One of the only proven methods for preventing hair loss is minoxidil, sold under the brand name Regaine. It is used for male pattern baldness, in which the body becomes over-sensitive to male hormones called androgens, which can block hair growth.

One survey found 70.6 per cent of 352 patients reported an improvement in hair growth after 16 weeks. The topical lotion can be bought over the counter (Boots sells a three-month supply for £69.99).

It was originally developed as a drug to lower blood pressure, with its hair loss remedies only discovered when people taking it realised they were growing hair where they had lost it.

One of the biggest hair loss ‘cures’ currently on the market are supplements such as Nourkrin and Viviscal which contain protein extracts from fish that are believed to regenerate hair follicles.

But they come at a cost and require commitment — tablets need to be taken twice a day for six months for best results, and cost around £50 for a month’s supply.

Proponents of caffeine shampoo claim it stops the hair roots being weakened by androgens, and in doing so encourages hair growth.

But there is still limited research to suggest it does work and this March the Advertising Standards Authority told the makers of Alpecin Caffeine Shampoo that they must no longer advertise that the product can reduce hair loss.