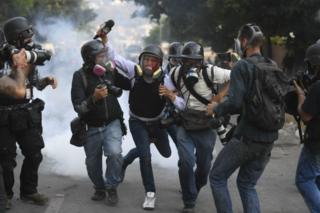 At least 95 journalists were killed last year during the course of their work, according to the International Federation of Journalists (IFJ).

The number of deaths is higher than in 2017, but not as high as peaks recorded in previous years when conflicts in Iraq and Syria were raging.

The highest number of media deaths recorded was 155 in 2006.

These figures include anyone working in some capacity for a media organisation.

One killing in 2018 which attracted global attention was that of prominent Saudi journalist Jamal Khashoggi.

He was murdered last October after going to the Saudi consulate-general in Turkey.

It sparked a diplomatic crisis between the two countries and a chorus of international condemnation.

And last month in the UK, journalist Lyra McKee died on the streets of Londonderry reporting on a riot that had broken out.

Where is most dangerous?

Afghanistan remains one of the most deadly countries for journalists, with 16 deaths last year.

Nine Afghan journalists died in a single incident in the capital, Kabul, after going to the site of a bomb attack to report on what had happened.

A secondary device was detonated by a bomber who was said to have disguised himself as a reporter.

And in the east of Afghanistan, BBC reporter Ahmad Shah was killed in one of a series of attacks in Khost province.

Journalists also died in the US last year.

Five were shot dead in an attack on the Capital Gazette newspaper office in Maryland by a man who had reportedly tried to sue the newspaper several years earlier.

Increasing intolerance to reporting, populism, as well as corruption and crime are now important factors, says the IFJ.

They “contribute to an environment in which there are more journalists killed for covering their communities, cities and countries, than for reporting in armed conflict zones”.

The Committee to Protect Journalists (CPJ) takes a snapshot of journalists in prison at the beginning of December each year.

This figure includes anyone working as a journalist, jailed for activities related to their work.

Countries with the highest numbers of imprisoned journalists in 2018 included:

The UN is highlighting this year the vital role of a free press for democracy, particularly during elections.

The UN Secretary-General Antonio Guterres says in a statement that “no democracy is complete without access to transparent and reliable information.”

Courtney Radsch, from the Committee to Protect Journalists, says anti-press rhetoric has become endemic in many countries, pointing in particular to the Philippines and the US.

She believes social media and the internet have added to the issues journalists face.

“Online harassment and its very real threats to journalists, especially women, has compounded the already challenging environment,” she says.

In its World Press Freedom Index this year, the group Reporters Without Borders (RSF) describes the situation in the US as “problematic.”

“Never before have US journalists been subjected to so many death threats or turned so often to private security firms for protection.”

The US has now slipped down in the RSF’s rankings for press freedom this year, and so have two other major democracies, India and Brazil.

But it adds that other countries who have had worse scores for press freedom – such as Venezuela, Russia and China – have gone down even further this year.